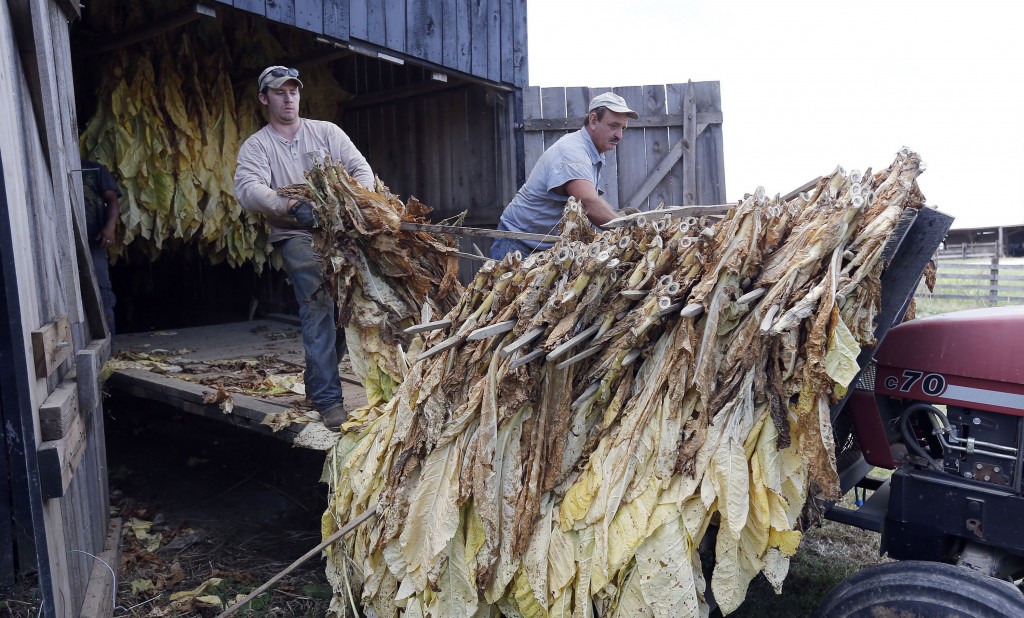 Jonathan Shell acknowledges that smoking isn’t good for you, but he says growing 190 acres of burley tobacco on his family’s farm in Lancaster, Ky., has provided a long list of benefits.

But now, he fears that his income might soon take a hit.

On Tuesday, the European Parliament is expected to vote on proposed tobacco rules that would crack down on the use of additives. Some growers say the new rules would result in a de facto ban on burley, because it’s routinely mixed with other flavorings and ingredients to alter the taste.

“The flavor of that cigarette is all contingent not only on the tobacco, but what they add to it,” said Shell, a fourth-generation tobacco farmer and a first-term Republican in the Kentucky House of Representatives. “So if Marlboro doesn’t taste like Marlboro anymore, then people might not buy them to smoke. And if people don’t buy cigarettes, then the tobacco companies don’t need tobacco – and that means I can’t feed my family.”

If the rules are approved, growers say, burley could get knocked out of one of the world’s largest and most lucrative tobacco markets.

U.S. burley growers shipped more than $110 million worth of their tobacco to European countries in 2011. Kentucky’s 4,500 growers, who rank first in the nation in burley production, ship 43 percent of their crop to Europe.

Shell is not optimistic about the vote, which he called “just one more attack on the family farm” and more bad news for an industry already battered by rapidly rising cigarette taxes and increasingly popular smoking bans.

“There’s faces behind that cigarette,” Shell said. “And if this passes, it’s going to hurt a lot of the family farms here in Kentucky.”

The dispute, which has touched off fierce lobbying on both sides of the Atlantic, has the potential to extend far beyond tobacco.

In a letter to the European Union last week, Shell and two other Kentucky state lawmakers said the new rules would be “technically impossible to meet.” And they said the rules would discriminate against burley farmers and jeopardize overall trade relations with the U.S.

Similarly, U.S. senators from tobacco-rich Kentucky and North Carolina have sent signals that adopting the new rules could result in tougher sledding on Capitol Hill for any new trade pact between the U.S. and the EU. Those talks are still in an early stage, with the second round set to begin Monday in Brussels.

In a letter sent in May, the senators told EU officials they had “serious concerns” about the new rules and their effect on trans-Atlantic trade relations. The letter was signed by North Carolina Republican Richard Burr and Democrat Kay Hagan, and Kentucky Republicans Rand Paul and Mitch McConnell, the Senate minority leader.

Tobacco opponents say the European Parliament should be free to act on behalf of its citizens and protect their health without fear of economic retaliation.

“If, for any reason, they prefer to smoke less U.S. tobacco, I think that should be up to them,” said Ellen Shaffer, co-director of the Center for Policy Analysis on Trade and Health in San Francisco, who called the rules a “perfectly legitimate” response to address smoking. “It just seems to me it’s such a classic case of why the trade arena is a terrible forum for hashing out these issues.”

Tobacco has been the subject of trade disputes before.

In one of the most well-known cases, Indonesia complained in 2010 that the United States had violated global trading laws when Congress banned clove cigarettes as part of the Family Smoking Prevention and Tobacco Control Act, a law aimed at curbing cigarette marketing to minors. That case is still pending before the World Trade Organization.

Tuesday’s vote comes after the European Parliament’s health committee voted in July to ban slim cigarettes and the use of flavorings in tobacco products, as a way to make smoking less attractive to youths. The new rules include updated packaging requirements and a ban on flavors such as menthol and strawberry, along with ingredients such as vitamins and caffeine.

“Around 570 children between the ages of 11 to 15 start smoking every day in the U.K., and we cannot justify a delay in acting on this,” Linda McAvan, a United Kingdom lawmaker who drafted the rules, said in a statement.

For his part, Shell laments that tobacco “has become a bad word.” And he said no government, either in the U.S. or abroad, should be allowed to put restrictions on his business or try to modify the private behavior of individuals.