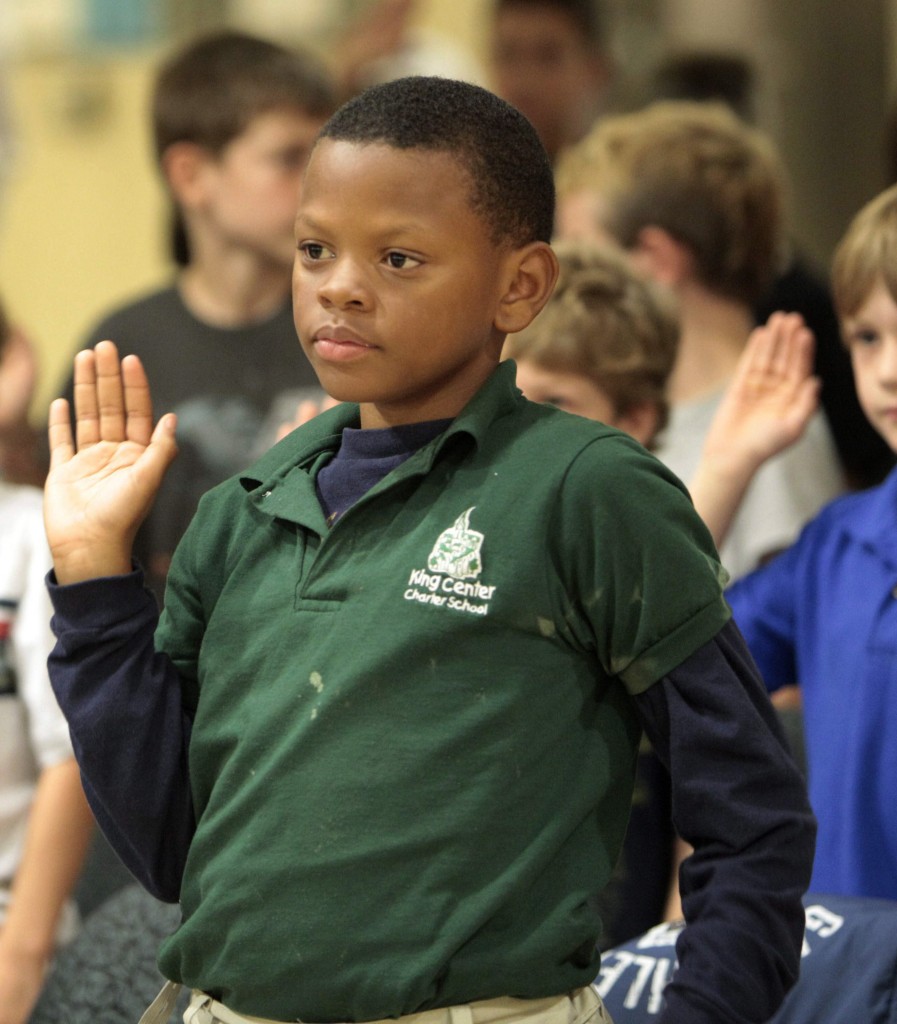 Democrat Bill de Blasio has widened his lead to a commanding 50 points over Republican Joe Lhota in the mayoral race, according to a poll released Thursday.

De Blasio, the city’s public advocate, was the choice of 71 percent of likely voters, far ahead of the 21 percent who favor Lhota, a deputy under former mayor Rudolph Giuliani, the Quinnipiac University poll found. In the first poll taken since his past support for the Sandinista revolutionaries in Nicaragua as a college student in the 1980s emerged, de Blasio’s margin grew from 66 percent over Lhota’s 25 percent in the last Quinnipiac survey, which was released Sept. 19.

De Blasio said after the poll was released that the lead was “gratifying and humbling.”

“I don’t take anything for
granted even though this is a wonderful poll,” he told 1010 WINS. “[Voters] want to find out what we can do to make this city a city of opportunity again. And that’s where I think the support is coming from.”

De Blasio, who is white and married to an African-American woman, enjoys a commanding lead with minority voters. Among black voters, he leads 90 percent to 6 percent, and 79 percent to 10 percent among Hispanics. Among whites, his margin is 55 percent to 40 percent.

The poll indicated that Lhota’s support has room to grow, as 33 percent of those surveyed hadn’t heard enough about him to form an opinion. Lhota spokeswoman Jessica Proud downplayed the results by saying “polls go up and polls go down.”

“We remain confident that once New Yorkers learn more, they will choose Joe Lhota, a proven leader with a real plan to move New York forward,” Proud said.

Lhota told NY1 Thursday that the three debates scheduled for later this month will be a game changer.

“The most important things coming up are the debates,” he said. “It will be mano-a-mano, Bill and me, and we’ll be able to talk about the issues.”

Host Greg Kelly pressed Lhota on criticism from supporters that, five weeks before the election, he is not doing enough to win.

“People like you, this is what I’ve heard. They think you have the requisite qualifications to be mayor,” said Kelly, a son of Police Chief Raymond Kelly. “What they don’t see, though, is the … you know, ‘Where’s Joe? Why doesn’t he talk louder? Why doesn’t he get out there more? Why isn’t he more aggressive?’”

But Lhota insisted that he’s out “18 to 20 hours a day” in all five boroughs, and most voters don’t start paying attention to the race until the last few weeks.

“If people want me to jump up and down I’ll do that, but I don’t think that’s what’s important to the people of the City of New York,” he said. “We need to get to a point where New Yorkers start to focus on the race. And they’re not there yet.”

De Blasio and Lhota were out with their first broadcast ads of the general election, with the Democrat painting himself as the vanguard of a political cause and the Republican appealing to cross-party voters with an emphasis on similarities between both candidates.

De Blasio’s ad features footage from his primary night victory party, where he quotes supposed critics as saying that his “ambition for this city is too bold, that we’re asking of the wealthiest New Yorkers too much, that we’re setting our sights for the children of this city too high.” De Blasio then knocks down those critics, saying, “We are New Yorkers. Thinking big isn’t new to us. We are bigger, we are stronger, we are better as a city when we make sure that everyone has a shot.”

Lhota’s ad, which airs in both English and Spanish, touts liberal social and moral values he shares with de Blasio, before hitting on what makes him different: his fiscal restraint.

Former NYPD commissioner Bill Bratton, who has been mentioned as a possible police chief in a de Blasio administration, defended de Blasio from comments from his former boss, Rudy Giuliani, that he was anti-police.

“I don’t detect any anti-police feeling or bias … [in] Mr. de Blasio,” Bratton told reporters following a speech at NYU. “He’s made it quite clear that he wants constitutional, respectful policing.”

Bratton, who served as police chief in the Giuliani Administration, joked when asked directly about his interest in leading the NYPD again.

“Apart from being an optimist, I guess I’m a glutton for punishment,” he said, adding that if he’s tapped to head the department next year, he’d decide then if it’s the right time.

With nearly three months left in his term, Walcott was indignant at the unusual request by several Education Committee members.

“Leadership is not about testing the wind and putting my finger up as to what the next administration may or may not do,” Walcott said. “The people haven’t spoken yet. I mean, there’s an election in November.”

The Bloomberg administration has supported charter schools, which are publicly funded but privately run. Many Democrats and the teachers’ union see it as taking money away from the public school system.

Gov. Andrew Cuomo’s new commission to cut up to $3 billion in taxes could spell trouble for Bill de Blasio, a fellow Democrat whom Cuomo endorsed but who wants to raise taxes if elected mayor.

Cuomo aides sought to downplay any potential battles with de Blasio, the front-runner for mayor who wants to hike the city personal income tax on those making $500,000 or more to fund different education programs. But an aide to Pataki said he wants to look at lowering all taxes, including income taxes on the wealthy.

“It’s a huge problem for de Blasio,” said one well-known Democratic official. “De Blasio’s plan was always going to be a challenge in Albany, but this certainly makes it harder.”

“Andrew Cuomo needs to get re-elected and Bill de Blasio needs a tax increase in an election year — that’s not usually a good mix,” he said.

Former Republican mayoral hopeful John Catsimatidis says he would be voting for Joe Lhota — not exactly an endorsement, but a long way from the bitter primary battle the two fought.

“I will say that all my Republican supporters will go for Joe Lhota, and I understand that,  and I will vote for Joe Lhota too,” the billionaire businessman told the Daily News.

Asked if that means he’s officially endorsing Lhota or would campaign for him, Catsimatidis responded, “I don’t know what it means, but I agree with him more than I disagree with him.”

Catsimatidis has said he was reluctant to back Lhota because he felt the GOP nominee didn’t like him.

“We are grateful for his support,” said Lhota spokeswoman Jessica Proud.

Councilwoman Letitia James extended an olive branch to her former opponent a day after winning the Democratic primary runoff for public advocate, telling an interviewer that she looks forward to sitting down with defeated state Sen. Daniel Squadron to follow up on his ideas.

James, who is nearly certain to become the first African-American woman to hold citywide office in January, said that Squadron called her about a half hour before her victory speech Tuesday night and that their bitter, sometimes personal, battle was over.

“He was very conciliatory. I thank him for his kind words and I look forward to working with the senator, Sen. Squadron, going forward,” she said. “He had some wonderful ideas and he ran a really spirited debate and campaign.”

James called the campaign a “Brooklyn fight” and promised to fight de Blasio on issues she disagreed with.

Runoff Cost Has Lawmakers Calling to Abolish It

A day after an expensive, low-turnout runoff election crowned Letitia James the Democratic nominee for public advocate, Councilman Brad Lander introduced a bill to switch the city to instant runoffs.

The Board of Elections spent $13.2 million on a contest where about 200,000 people voted — coming out to around $69 a vote. The budget of the office they were voting for, by contrast, is only about $2 million a year.

“We could have saved $13 million,” Lander said at a press conference on the City Hall steps Wednesday.

Under an instant runoff system, voters rank the candidates on the ballot in order of preference. If no one gets 40 percent, the last-place finisher is eliminated and their votes are redistributed to the voter’s second choice, a process that continues until someone reaches a majority.

Proponents say in addition to being cheaper, it’s a better system because turnout in runoffs tends to be low, whereas more people vote in primaries.

Though the Queens Republican Party declared incumbent chairman Phil Ragusa the victor in a raucous leadership vote last week, former Rep. Bob Turner (R-N.Y.) has no plans for a concession speech yet.

According to party officials, Ragusa won re-election by 52 percent, with Turner garnering about 48 percent of the vote. But Turner said he was confident court litigation over the next few weeks would find him victorious.

“We know we won,” Turner said. “This is going to have to be solved at a different level.”

“There were elections in the Soviet Union conducted more fairly than this one,” said Councilman Eric Ulrich, a prominent critic of Ragusa and Turner’s biggest booster. “From what I understand, our attorneys will be drafting paperwork to invalidate Phil Ragusa’s certificate.”

But a Republican source told Politicker that Turner, who won an upset for a heavily Democratic congressional seat in 2011, faces an uphill battle. Ulrich accuses the party of counting 100 percent of votes cast for Ragusa but dismissing half of Turner’s votes. But courts, the source said, rarely overturn the election results conducted privately by county organizations.

In 2009, and then again in 2011, a group led by Ulrich, one of four GOP councilmen, ran their own party chair and, losing the race, took the case to court and lost.

“This is more of the same from this ethically challenged group,” said Robert Hornak, the executive director of the Queens GOP. “They declared Bart Haggerty the Chairman in 2009 and Tom Ognibene the Chairman in 2011. This claim has the same merit as those.”