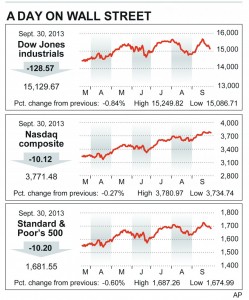 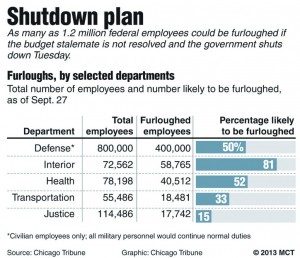 Stocks fell Monday as Wall Street worried that a budget fight in Washington could lead to an event far worse for the economy — a failure to raise the nation’s borrowing limit.

Investors pulled back from stocks as a budget standoff between Republicans and Democrats in Congress threatened to push the government into a partial shutdown for the first time in 17 years. Lawmakers have until midnight Tuesday to reach a budget deal that would keep government in full operation.

There is a simple reason why the budget battle — and, more importantly, an upcoming fight over the debt ceiling — are so crucial: the credit of the United States is the bedrock that nearly every other investment is built upon, largely due to the assumption that the nation will always pay its debts.

“The concern is government has become so polarized that if it cannot pass (a budget), there’s a greater chance that the debt ceiling battle will go to the brink or possibly lead to a default,” said Alec Young, global equity strategist with S&P Capital IQ.

Monday’s decline adds to what has been eventful September for investors. Stocks hit an all-time high on Sept. 18 after the Federal Reserve voted to keep up its economic stimulus program. But that enthusiasm vanished as Wall Street began to worry that the political bickering between Democrats and Republicans would lead to a government shutdown and crisis over the debt ceiling.

Even with the worries about a shutdown and debt ceiling, investors are still optimistic about the long-term health of the U.S. economy. The S&P 500 index rose 3 percent in September and is up 18 percent for the year.

With September behind them, investors now head into a worrisome October.

A brief shutdown wouldn’t hit the economy and stock market hard. But a prolonged one, lasting two weeks, could lower the annual growth rate for the economy by 0.3 percentage point, according to a report by Macroeconomic Advisers. If a shutdown were to last the entire month, it could cut the annual growth rate by 0.7 percentage point. That is because hundreds of thousands of federal workers would go without a paycheck.

Some investors think a shutdown could be a positive event in the long-term. The political pressure could force politicians to get down to business and negotiate — particularly on the issue of the debt ceiling.

“This may be good thing in the long run because it may lead to compromise,” said J.J. Kinahan, chief strategist at TD Ameritrade.

“This sort of political brinkmanship is the dominant reason (the United States’ credit) rating is no longer ‘AAA,’” Standard & Poor’s analysts Marie Cavanaugh and John Chambers wrote in a note to investors Monday.

If domestic and foreign investors begin to question whether the U.S. will pay its debts, it could throw every other investment out of alignment.

Despite fears of default, the bond market was fairly quiet Monday. The yield on the benchmark 10-year U.S. Treasury note eased to 2.62 percent from 2.63 percent late Friday. Bond investors are in a wait-and-see mode.

They can deal with a government shutdown. However, if the political dysfunction becomes worrisome enough that it raises questions about the debt ceiling, “it might be more difficult for the bond market to absorb that,” Lowery said.

This article appeared in print on page 8 of the October 1st, 2013 edition of Hamodia.