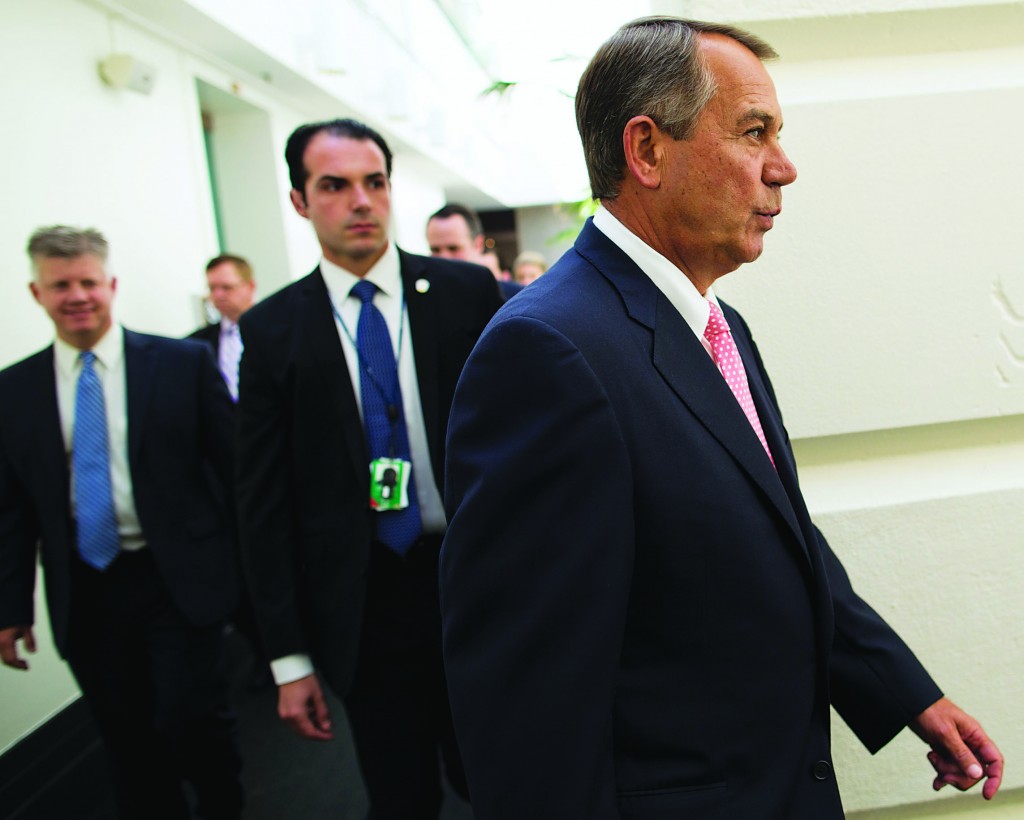 Their unity fraying, House Republicans bent but did not blink Monday in their demand for changes in the nation’s health-care overhaul as the price for preventing the first partial government shutdown in 17 years.

As lawmakers squabbled, President Barack Obama urged them to “act responsibly and do what’s right for the American people.” At the White House, he said he was willing to discuss long-term budget issues with members of Congress, and expected to do soon. But, he added, “The only way to do that is for everybody to sit down in good faith without threatening to harm women and veterans and children with a government shutdown.”He says it would “throw a wrench into the gears” of a recovering economy.

He urges the House to pass a short-term spending bill free of any conditions that would weaken the nation’s 3-year-old health care law.

In a fast-paced series of events, the Senate voted 54-46 to reject a House-passed measure that would have kept the government open while delaying implementation of the health-care law for a year and permanently repealing a medical device tax that helps finance it.

House Republicans, reacting swiftly, decided to try again. Their new proposal was to allow the government to remain open, while imposing a one-year delay in a requirement in the health- care law for individuals to purchase coverage or face a financial penalty. Their measure also would require members of Congress to bear the full cost of their own coverage by barring the government from making the customary employer contribution.

“This is a matter of funding the government and providing fairness to the American people,” said Speaker John Boehner. “Why wouldn’t members of Congress vote for it?”

Asked if a stand-alone spending bill was still possible instead, he said, “That’s not going to happen.”

Democrats said the House GOP measure was doomed in the Senate, and would meet the same fate as every other attempt to delay the law that passed in 2010 and was upheld by the Supreme Court.

A shutdown would cause an uneven impact across the face of government, sending hundreds of thousands of workers home and inconveniencing millions of Americans who rely on government services or are drawn to the nation’s parks and other attractions.

About 800,000 federal workers, many already reeling from the effect of automatic budget cuts, would be ordered to report to work Tuesday for about four hours — but only to carry out shutdown-related chores such as changing office voicemail messages and completing time cards. Once they departed, they would be under orders not to do any government work.

Some critical services such as patrolling the borders, inspecting meat and controlling air traffic would continue. Social Security benefits would be sent, and the Medicare and Medicaid health-care programs for the elderly and poor would continue to pay doctors and hospitals.

Ironically, the issue at the core of the dispute, implementation of key parts of “Obamacare,” will begin Tuesday on schedule, shutdown or no.

The last time the government shutdown, in 1996, Republicans suffered significant political damage, and then-President Bill Clinton’s political fortunes were revived in the process.

Now, as then, Republicans control the House, and senior lawmakers insist even a shutdown isn’t likely to threaten their majority in the 2014 elections. “We may even gain seats,” Oregon Rep. Greg Walden, who chairs the party campaign committee, said recently.

For all the controversy about other matters, the legislation in question is a spending bill — and there was little if any disagreement about the spending-related issues.