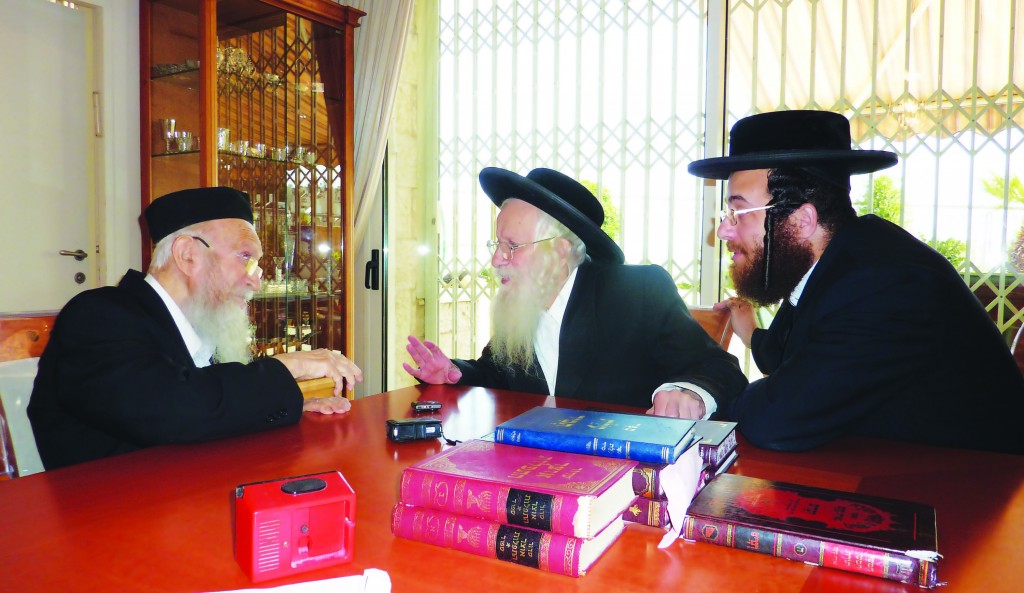 One of the elder chassidim and marbitzei Torah in Yerushalayim, and Rosh Yeshivah L’Tzeirim of Eitz Chaim and Bais Yosef Tzvi Dushinsky

Harav Nuta Freund was born in the Old City of Yerushalayim in Elul 5684/1924. His father was Harav Yaakov Menachem Freund, zt”l, an erudite Chassid and scholar, and his mother was Sarah, a”h, the daughter of Harav Dovid Aryeh and Rebbetzin Faigel Brizel. He grew up in a home saturated with Torah and chassidus, together with his brothers, Harav Sender Freund, zt”l, and, ybl”c, Harav Chaim Uri Freund, shlita.

Harav Yosef Chaim Sonnenfeld, zy”a, the Rav of Yerushalayim, was his mohel.

When he was three years old, Reb Nuta fell dangerously ill and required surgery. His mother went to the home of Harav Nachum of Rachmistrivka, zy”a, and poured her heart out to him. Reb Nachum promised her the child would survive the surgery and have a long life. When Nuta was eight years old, he came with his father to a tisch of Reb Nachum, and the young boy entered the center of the circle and danced by himself. The Rebbe observed the boy for a while and then gave him lekach and blessed him again with long life.

He toiled in Torah, middos, and yiras Hashem all his life, from extreme youth to very old age, with love and diligence.

Harav Isser Zalman asked Reb Nuta to write and edit his chiddushim, and in his sefer Even Ha’ezel, Volume 5, he writes: “To my dear Reb Nuta Freund, for bringing the chiddushim in the halachos of avodas hakorbanos…”

In Yeshivas Eitz Chaim he set up a chavrusa with his childhood friend, Harav Yaakov Yisrael Fisher, zt”l, later the Raavad of the Eidah Hachareidis. They learned masechta Bava Metzia and Kiddushin four times during their partnership, and knew them by heart.

Reb Nuta married, tbl”c, Rebbetzin Rochel, the daughter of Harav Shimon Hillel Schlesinger, zt”l. Together, they established a home of Torah and chassidus.

When Harav Eliezer Yehudah Finkel, zt”l, established the Mirrer Yeshivah in Yerushalayim, Reb Nuta was one of the first ten avreichim he selected to accept.

At the levayah of Harav Avraham Chaim Heckelman, Reb Nuta met his friend, Harav Shlomo Zalman Auerbach, who said to him: “Now, you must replace Reb Avraham Chaim.” But Reb Nuta was afraid to take responsibility for teaching talmidim and so Reb Avraham Chaim Hecklman was succeeded by Harav Chaim Mann, zt”l. When he retired, Reb Yechiel Mechel Tikuchinsky of Eitz Chaim came on behalf of Gedolei Yisrael to try to persuade Reb Nuta to fill the position. Reb Nuta went to the Tchebiner Rav, zt”l, whose decision was firm: “I pasken that you must accept the job!”

From that point on, Reb Nuta devoted himself to inculcating legions of talmidim with Yiras Hashem, using his pleasant ways to draw boys closer to their Father in Heaven.

Reb Nuta was mechanech more than 4,000 talmidim, and he carried them in his heart until the end of his life. Among them were Rebbes, Roshei Yeshivos, Rabbanim and maggidei shiurim who today occupy prominent Torah positions. Students never forgot the special year they spent under Reb Nuta.

Bachurim who learned under Reb Nuta reviewed each daf an average of 50 times. One student, today a grandfather, expressed his appreciation for his rebbi: “Today, I can swim through maseches Bava Metzia like a fish in water.” Reb Nuta instituted a competition among his boys, awarding points in accordance with the number of times they reviewed each daf.

For the past 30 years, Reb Nuta disseminated Torah to the bachurim at Yeshivas Bais Yosef Tzvi Dushinsky, serving as the Rosh Yeshivah, and imparted his learning methods to them with his characteristic sweetness, setting them on the path to greatness in Torah.

He also delivered a daily shiur to eminent talmidei chachamim in the Pupa beis medrash for nearly 40 years. He also delivered weekly shiurim on Thursday nights in Zupnik on the weekly parashah.

He instilled his students with the value of Avodas Hatefillah by example. Even when he was elderly, he prepared for davening both by learning and by immersing in a mikveh.

Bachurim would come and stand in the stairwell of his apartment building to hear him pleading with his Creator that he find success in his avodas Hashem during the coming day, and praising Him for all that He had granted him thus far.

Upon the arrival of the Imrei Emes of Ger, zy”a, in Eretz Yisrael, Reb Nuta became close to him. Reb Nuta also forged a close relationship with the Bais Yisrael, zy”a, and would frequently visit his home to update him on the learning and avodas Hashem of the bachurim.

Harav Shlom’ke of Zhvill, zy”a, said of him that he was an avreich with yiras Shamayim. After his marriage he also became close to Harav Yosef Tzvi Dushinsky, zy”a, who served as his mesader kiddushin, and who noted that the young chassan was a yarei and a shalem.

Reb Nuta traveled frequently to Harav Yisrael of Husyatin, zy”a, to hear his divrei Torah and to observe his unique tefillos. Likewise he was close to Harav Ahre’le, the Shomer Emunim, zy”a, and the Chelkas Yehoshua of Biala, zy”a, who gave Reb Nuta a sefer as a gift that he held dear all his life.

Likewise, he was held in great esteem by Harav Yochanan of Stolin-Karlin, zy”a, who remarked that Reb Nuta “is accustomed to seeing miracles.”

Each Friday night, he would walk to the Katamon neighborhood with his friend and relative, Harav Nuta Zeinwirth, z”l, to the tisch of Harav Aharon of Belz, zy”a, where he would sit in great awe.

Reb Nuta’s greatness was rivaled only by his humility. It was not uncommon to find Reb Nuta enthusiastically speaking in Torah or telling sippurei tzaddikim even to young children.

On Shabbos Shuvah, he was hospitalized. He passed away Wednesday morning.

He left instructions in his will not to eulogize him, and thus the Gaavad of the Eidah Hachareidis, Harav Yitzchak Tuvia Weiss, shlita, and his brother, Harav Chaim Uri Freund, shlita, delivered divrei chizuk and Harav Kalman Weiss, shlita, read aloud parts of his will pertaining to his students.