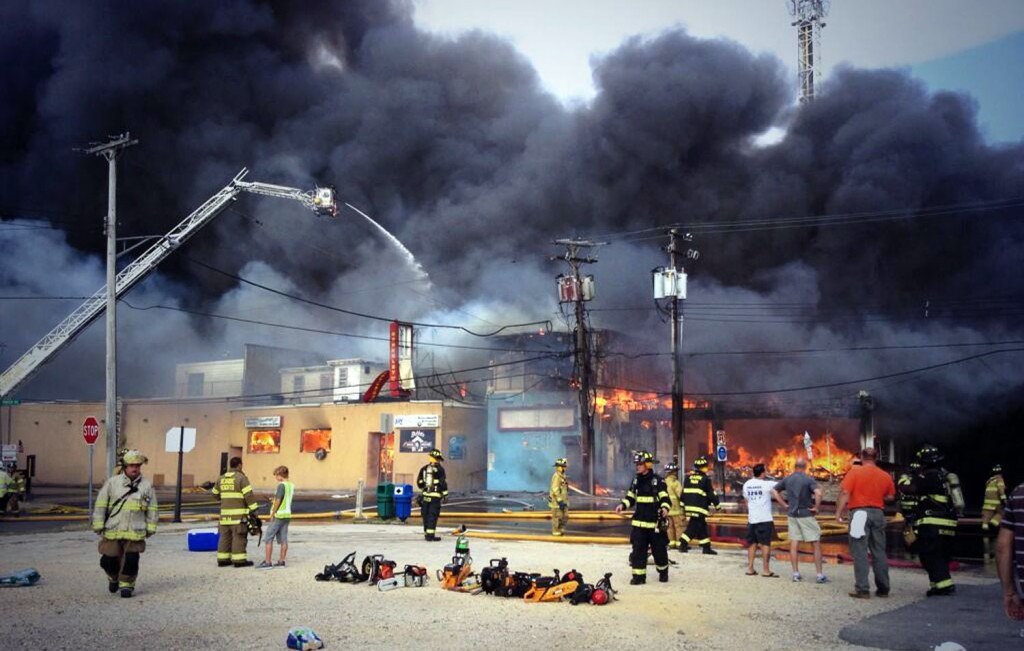 A massive fire spitting fist-sized embers engulfed dozens of businesses along an iconic Jersey shore boardwalk Thursday, forcing workers to rip up stretches of walkway only recently replaced in the wake of Superstorm Sandy as they raced to contain the blaze’s advance.

The 6-alarm blaze began in a frozen custard stand on the Seaside Park portion of the boardwalk around 2:30 p.m. and fanned by 15-20 mph winds from an approaching storm system, quickly spread north into Seaside Heights,  and where the October storm famously plunged a roller coast into the ocean.

No serious injuries were reported as of 7 p.m., but the blaze continued to burn out of control and had destroyed all 32 businesses on the Seaside Park portion of the boardwalk, borough Councilwoman Nancy Koury told The Associated Press. An undetermined number of additional boardwalk businesses in Seaside Heights also were burned.

“We’re going to be here for several days,” one firefighter said as he scurried toward the flames.

The blaze tore the heart out of two popular Jersey shore resort communities whose livelihoods depend on summer tourism and who had just spent millions of dollars rebuilding their boardwalks, arcades, pizza stands and grills to be ready for the summer season.

“It’s devastating; I’ve been crying all afternoon,” said Shirley Kreszl, who has rented a summer home in Seaside Park for decades. “Haven’t we been hit enough? We try to rebuild and just when we think we saved a little bit of our town, this happens. It’s just not fair.”

Gov. Chris Christie, who raced to the fire scene, was typically blunt describing his thoughts as he approached the blaze.

Koury said the fire caused several million dollars’ worth of damage. At one point, she said, flames jumped across Ocean Avenue, the oceanfront street, and ignited two or three small houses but firefighters quickly doused them. A motel near the boardwalk also was engulfed in flames.

For hours, two boardwalk businesses, an arcade and the Saw Mill Cafe, escaped the flames. But shortly before 7 p.m. both were engulfed in a huge orange fireball that rolled into the darkening sky.

“I can’t believe this is happening,” Koury said as she watched the flames devour the structures. “Our small business people went through so much in the storm to get ready for summer and stay open all summer, and now it’s all gone. I just can’t believe it.”

Further north in Seaside Heights, public works crews ripped up a section of the newly rebuilt boardwalk to serve as a makeshift fire break, in much the same way that forest fire crews clear out underbrush to deprive an advancing fire of fuel.

Christie said the fire had engulfed at least six blocks, and was being fought by a force of 400 firefighters, some from miles away.

Officials said the fire got underneath the boardwalk, making it even more difficult to extinguish.

“It’s underneath the boards, and its coming up through the cracks,” Koury said. “It’s making it harder to get water on it.”

In Seaside Heights, real estate agent Michael Loundy, who works with the borough on tourism related projects, was pained as he watched firefighters make a stand against the flames on DuPont Avenue, several blocks from the Seaside Park border.

“It’s raging,” he said “It is absolutely raging. The wind is blowing something fierce, making it very difficult for firefighters to fight.”