Nation Pauses on 9/11 to Pay Tribute to Victims 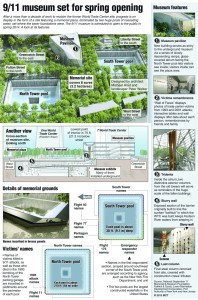 Life in lower Manhattan resembled any ordinary day on Wednesday as workers rushed to their jobs in the muggy heat, but time stood still at the World Trade Center site while families wept for loved ones who perished in the terror attacks 12 years ago.

For the families, the memories of that day are still vivid, the pain still acute. Some who read the names of a beloved big brother or a cherished daughter could hardly speak through their tears.

“Has it really been 12 years? Or 12 days? Sometimes it feels the same,” said Michael Fox, speaking aloud to his brother, Jeffrey, who perished in the south tower. “Sometimes I reach for the phone so I can call you, and we can talk about our kids like we used to do every day.”

On the memorial plaza overlooking two reflecting pools in the imprint of the twin towers, relatives recited the names of the nearly 3,000 people who died
when hijacked jets crashed into the towers, the Pentagon and in a field near Shanksville, Pa. They also recognized the victims of the 1993 trade center bombing.

Bells tolled to mark the planes hitting the towers and the moments when the skyscrapers fell.

In Washington, President Barack Obama, first lady Michelle Obama, Vice President Joe Biden and wife Jill Biden walked out to the White House’s South Lawn for a moment of silence at 8:46 a.m. — the time the first plane struck the south tower in New York. Another jetliner struck the Pentagon at 9:37 a.m.

“Our hearts still ache for the futures snatched away, the lives that might have been,” Obama said.

A moment of silence was also held at the U.S. Capitol.

In New York, loved ones milled around the memorial site, making rubbings of names, putting flowers by the names of victims and weeping. Former Gov. George Pataki, New Jersey Gov. Chris Christie and others were in attendance. As with last year, no politicians spoke. Mayor Michael Bloomberg watched the ceremony for his final time in office.

Carol Eckna recalled the contagious laugh of her son, Paul Robert Eckna, who was killed in the north tower.

The anniversary arrived amid changes at the Flight 93 National Memorial in Shanksville, where construction started Tuesday on a new visitor center. On Wednesday, the families of the passengers and crew aboard United Flight 93 recalled their loved ones as heroes for their unselfish and quick actions. The plane was hijacked with the likely goal of crashing it into the White House or Capitol, but passengers tried to overwhelm the attackers and the plane crashed into the field. All aboard died.

“In a period of 22 minutes, our loved ones made history,” said Gordon Felt, president of the Families of Flight 93, whose brother, Edward, was a passenger.

Outside Washington, hundreds of people gathered for a short, simple ceremony at an Arlington County plaza three miles from the Pentagon. First responders from the county were among the first on the scene that day.

Fire Chief James Schwartz said ceremonies like Wednesday’s — which featured an honor guard and a moment of silence — serve as a reminder of why first responders spend so much time preparing for disaster.

By next year’s anniversary, a 9/11 museum is expected to be open beneath the memorial plaza in New York City. While the memorial honors those killed, the museum is intended to present a broader picture, including the experiences of survivors and first responders.

“As things evolve in the future, the focus on the remembrance is going to stay sacrosanct,” memorial President Joe Daniels said.

Douglas Hamatie, whose 31-year-old cousin Robert Horohoe worked for Cantor Fitzgerald and died on 9/11, drew applause from the crowd when he declared that the day should become a national holiday.

“The kids today, they know when the next iPhone’s coming out … but they don’t know enough about 9/11,” he said. “So let’s change that, please.”

The organizers have said they will always keep the focus on the families, and that was evident this year as relatives gathered on the tree-laden plaza, where a smaller crowd gathered — only friends and family of the victims were allowed.

This article appeared in print on page 4 of the September 12th, 2013 edition of Hamodia.