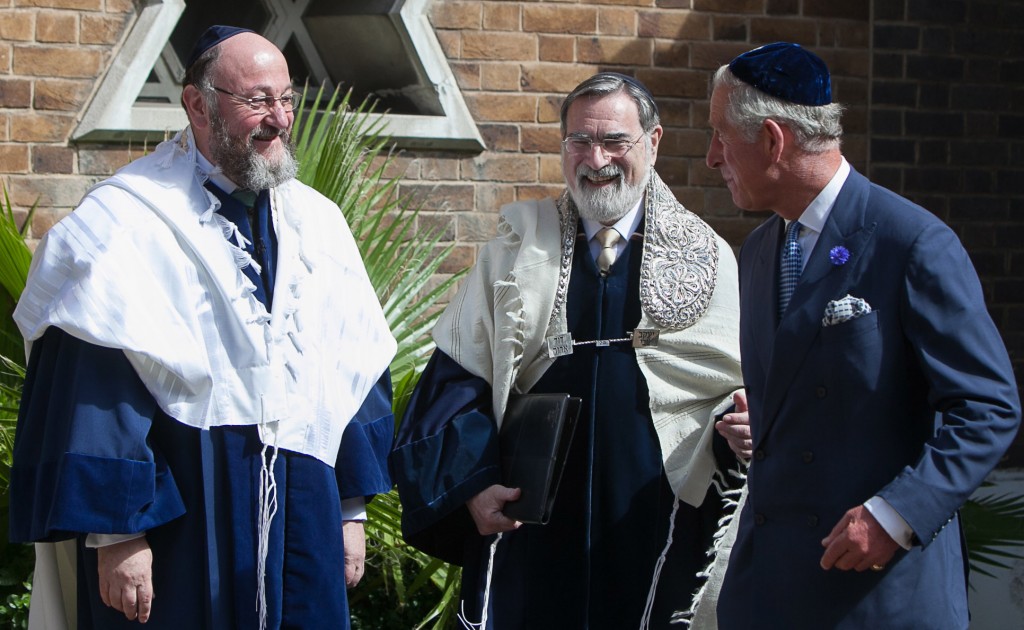 Around 1400 guests, including the HRH the Prince of Wales; leader of the opposition, Ed Milliband; representatives of the Prime Minister and Deputy Prime Minister, many other politicians and faith leaders and nearly 200 Dayanim and Rabbanim, attended the hachtarah of Rabbi Ephraim Mirvis as the Chief Rabbi of the United Kingdom and the Commonwealth, in St Johns’ Wood synagogue on Sunday afternoon. Dayan Ivan Binstock, Rav of the shul, explained in his welcome speech that, although Rabbanim are usually “inducted” into office, the traditional term used for a Chief Rabbi is “installation.” He gave his brachah to the new Chief Rabbi, quoting the passuk in Yirmiyahu “Haben yakir li Ephraim…. Is not Ephraim a precious son to me?” observing that the Chief Rabbi was given that name as he was born on Rosh Hashanah and expressing his hope that he would always be regarded as both a precious son and a great leader.

The proceedings continued with excerpts from Hallel, lead by chazzanim Avromi Freilich and Jonny Turgel, who managed to get almost the entire audience singing with them — no small feat in such a large crowd. The atmosphere at the event moved between the lively tunes and audience participation and the solemnity of Tehillim led by Senior Dayan of the London Beth Din, Dayan Menachem Gelley; Chief Rabbi of Moscow and President of the Conference of European Rabbis, Rabbi Pinchas Goldschmidt; and Rabbi Dovid Freilich, senior Rabbi of Perth Hebrew Congregation and past President of the Organisation of Rabbis of Australasia.

In a moving touch, the aron was opened by the father and father-in-law of the new Chief Rabbi, Rabbi Dr. Lionel Mirvis and Dr. Stanley Kaplan and the sifrei Torah were carried and held by the Mirvis’ four sons, Hillel, Daniel, Noam and Eitan.  Rabbi Aaron Lipsey, vice-chair of the Rabbinical Council of the Provinces read the prayer for the Royal Family and Rabbi Baruch Davis, chair of the Rabbinical Council of the United Synagogue, the prayer for Israel.  Chief Rabbi Mirvis then came forward and recited the acceptance prayer.

Anglo-Jewry’s youth was represented by the head boys and girls of a number of Jewish schools across the country coming forward to give readings from Nach.  During the tenure of Emeritus Chief Rabbi Lord Sacks, there was an exponential growth in the number and range of Jewish schools at both primary and secondary level, encouraged and nurtured by hard-working and dedicated askanim and philanthropists, with his encouragement. The participation of these young people was a symbol of this growth.

Speaking entirely without notes, Chief Rabbi Mirvis gave an eloquent and well-structured speech, covering a number of different topics.  He began by expressing his gratitude to the Ribbono shel Olam for having brought him to this position, and asked for His brachah for success in his huge task.  Moving on to thank the assembled audience, he wished Prince Charles mazal tov on the birth of his first grandchild and welcomed other distinguished visitors. The impressive guest list of dignitaries both from within and without the community is a testament to the esteem with which the office of Chief Rabbi is regarded and to the standing in the country of the Jewish community.

He then moved on to the main theme of his sermon. Using the idea of “Gadlu laShem iti u’neromemah Shemo yachdav, Chief Rabbi Mirvis invited the kehillah to embark on a journey with him, of doing “great things for the L-rd” and making a Kiddush Hashem together.  He suggested three main areas of endeavour, based on the Mishnah in Pirkei Avos: Torah, Avodah and Gemilus Chassadim. The Chief Rabbi said there will be three pillars to his Chief Rabbinate: enhancing and strengthening Jewish education, building and developing communities across the country and the Commonwealth and realizing our potential for social responsibility.

He concluded with a rousing appeal to join with him in actualising these goals, lekadesh shem Shamayim.