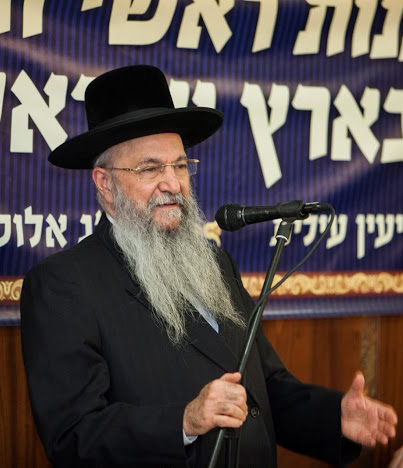 A unique and impressive gathering was held this week in the third largest chareidi city in Eretz Yisrael, Modiin Illit, where Roshei Kollel, who bear the burden of supporting the families of avreichim, gathered in light of the economic decrees on the yeshivos and kollelim. The gathering was themed “Az Nidberu Ish el Re’ehu” in the hope that “Yakshiv Hashem V’yishma, Hashem should hear and listen.” The assembled spoke with one another in an effort to come up with ideas and to provide chizuk to one another during these difficult times, when their mosdos are experiencing drastic budget cuts.

Modiin Illit has hundreds of kollelim where avreichim learn Torah all day and subsist on a monthly stipend provided by the Rosh Kollel. In the past few months, kollel budgets have been drastically cut, leaving many families unable to afford even basic needs. The Roshei Kollel are buckling under the burden of maintaining the kollelim; many of them travel abroad for extended periods to be able to perpetuate the tradition of learning Torah in Eretz Yisrael.

The organizers of the gathering noted that the objective was to be able to share feelings with one another at this difficult time.

The gathering was opened by the Rosh Yeshivah of Bais Abba and Rosh Kollel of Bais Shalom, Harav Avraham Dov Freund, who opened the first kollel in Modiin Illit.

He related that the kollel opened the first month with 45 avreichim and by the fourth month, 101 avreichim were crowded into the kollel, studying from morning to night. With time, the kollel has grown many times over, and today, it numbers some 500 avreichim! Since the establishment of this first kollel, another 200 have opened in the city, among them a kollel boker, a kollel erev and kollelim for Erev Shabbos and Motzoei Shabbos, for a total of more than 10,000 avreichim studying Torah in this city.

“In our time, 20 years ago,” Harav Freund said, “the concept of a kollel with 100 avreichim virtually didn’t exist. A kollel was considered big if it had 20 men. But 100 at once, that didn’t exist. I’ll never forget how generous people whom I visited to solicit funds looked at me strangely. One hundred young men sitting and learning Torah in a brand-new city? Baruch Hashem, today there are 10,000 such kollel avreichim. Kein yirbu.”

He then added, “We have to know that when we speak, Hashem listens; He hears how we internalize the events as they have happened. Are we turning our arrows on those who issued the decrees against us, or are we turning inward and trying to come up with a reason why this has happened to us? Because these decrees are from our Father in Heaven, and their objective is to strengthen us. The evil person who executes them is only like clay in the potter’s hands.

“The message is, as the Gedolei Hador have said, that at this time we must continue and strengthen ourselves with learning, davening and chizuk, and to reiterate to ourselves that everything is from Hashem, and only through asking Him for mercy will we see salvation. At this special gathering of Roshei Kollel, there are a few important points that must be stressed:

“First of all, we, as Roshei Kollelim, must not show weakness toward the avreichim, and each father must exude in his home the confidence that with Hashem’s help, we will get through these troubles as well, and that we shouldn’t be afraid, because Hashem is with us.

“Second, we have to continue our work with joy, to see it as a great privilege that is our lot, and to ensure that our joy emanates from us to those around us. T

“Third, we have to strengthen our bitachon, and know that now we have to fight for the existence of the avreichim, and this is an existential war of the entire Torah world here in Eretz Yisrael. Each Rosh Kollel must remember that he is a leader of our nation, part of an entire network. If the individual Roshei Kollel weaken, that will be the beginning of the end of the Torah world in Eretz Yisrael. We mustn’t let such a chillul Hashem happen. And on the other hand, if we get through this together, it will be a tremendous Kiddush Hashem, and our enemies will see that Hashem’s Hand will prevail and anyone who tries to rise up against Him will not succeed.”

Harav Freund related that he heard from Hagaon Harav Aharon Leib Steinman, shlita, who was asked by laymen on his first visit abroad, why do we need so many kollelim? In Europe, there were just a few kollelim. There was one known kollel in Kovno, and another in Radin, and a few others scattered around. Harav Steinman replied: “And why are there so many wealthy people, do you understand that? Once, there was one wealthy person in each town, maybe two to a city. Today, every street here in Boro Park has millionaires. The reason is that Hashem prepared the medicine for this situation, that there should be a lot of kollelim.”

Harav Freund concluded, “We believe that the situation in which we currently find ourselves, where there are, baruch Hashem, tens of thousands of avreichim and tens of thousands more yeshivah bachurim, is a situation that was navigated by Gedolei Yisrael, and we merited to be their emissaries. We must not get confused by those weak-minded people who claim that there are too many bachurim and avreichim learning Torah.”

The guest of honor of the evening was Harav Yaakov Edelstein, shlita, who came from Ramat Hasharon to strengthen the Roshei Kollel.

Harav Edelstein spoke about the kollel he has been heading for the past 60 years, and said that each month was a new “Yom Hadin” to come up with the needed funds.

He related that collecting money for yeshivos was always the hardest task, and is that much harder in our time. All the great Roshei Yeshivah — Harav Shimon Shkop, Harav Baruch Ber Leibowitz, Harav Eliezer Yehudah Finkel and Harav Elchanan Wasserman, Hy”d — experienced great humiliation during their efforts to raise funds. “Although we have been blessed to be greeted with much kindness, now we have to work harder,” he said.

Harav Edelstein concluded by saying that we must know that Hashem is the One who provides sustenance to all, and He will make sure that there will be an abundance in our community. Roshei Kollel are offering everyone an opportunity to help carry the Aron Bris Hashem. The Midrash in parashas Terumah on the passuk “v’asu li Aron” asks, why does it only say “v’asu” in the plural for the Aron, while the rest of the keilim were written in singular form? The Midrash replies that the Aron was for the Torah, and thus everyone had to have a part in it and be busy with it.

The final speaker was Harav Yaakov Hillel, Rosh Yeshivah and Rosh Kollel of Ahavat Shalom. He said that we must know that our obligation to devote ourselves to raise money for Torah is such that, chalilah, there should not be a situation in which, because of the cutbacks of the evil people in our generation, even one avreich will stop studying. That would classify the situation as “she’as hashmad,” as the Gemara says in Sanhedrin, that one must give his life even for arkesa demsana; when the gentile wants us to go with red shoelaces, we must fight against it, because we must show that he will not determine what the Jew has to do. Every avreich has a Rav, and if he has a question, the only address for it is his rebbi, and not the evil people, who will not instruct him, or the general community, what to do.

“We have merited many wealthy Jews in our time, who give generously to the Torah world, and we must know that Hashem has granted them such wealth only in order to build Torah. Baruch Hashem we see that when they are asked, they give. There are Yidden who give tremendous amounts towards Torah.”

Harav Hillel concluded with a brachah that Hashem should help all of us succeed in standing strong in His war, the battle for Torah, and anyone who traveled abroad once a year until now should now try to go twice. Anyone who goes for one week a month should try to go for two. And Hashem will see the hishtadlus, the effort, and will surely help us and make it easier, as Chazal say, “Haba letaher, mesayin lo,” and “Pischu Li pesach, open for Me an opening the size of a pinhead and I will open a door the size of a banquet hall.”