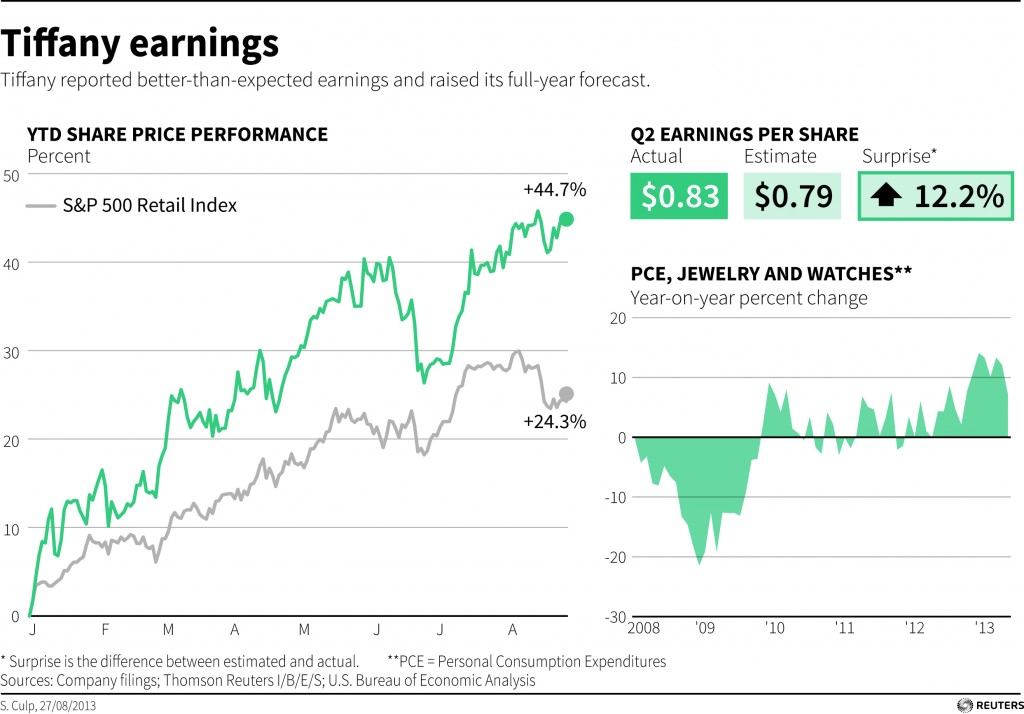 Tiffany & Co. boosted its full-year earnings forecast on Tuesday, after posting a 16 percent increase in second-quarter profits on strong sales in China that offset sluggish growth in the U.S.

The performance was a bright spot among a pile of disappointing earnings reports released in the past few weeks that have fed concerns over shoppers’ – even affluent ones – willingness to spend heading into the winter holiday season. Many lowered expectations for the rest of the year.

Several upscale retailers, including Saks Inc., Ralph Lauren Corp. and Coach Inc., reported weak sales during the spring and early summer period. But Tiffany, which is considered a bellwether for the luxury market, gives hope that well-heeled shoppers are spending.

“Total sales growth met our objective due to solid performance in most regions, and with particular strength in our statement and fine jewelry product categories,” said Michael J. Kowalski, chairman and CEO, in a statement.

Revenue for the New York company increased 4 percent, to $925.9 million from $886.6 million, helped by strong performances from its statement and fine jewelry products. Tiffany defines statement jewelry as pieces priced over $50,000.

Analysts polled by FactSet predicted lower earnings of 74 cents per share, on higher revenue of $941.5 million.

Asia-Pacific sales climbed 20 percent, led by strong results in China. European sales rose 11 percent, buoyed by strength in the U.K. and most of continental Europe.

Japan’s sales were dragged down by a weaker yen, falling 14 percent. On a constant currency basis, sales climbed 7 percent, on increased sales of engagement and higher-end jewelry.

In the Americas, sales edged up 2 percent, led by better sales at its flagship store in New York. The sales increase, however, was entirely due to an increase in average price per jewelry item sold. A modest decline in jewelry items reflected weakness in the moderately priced fashion jewelry category, which more than offset unit growth in higher-priced statement and fine jewelry.

Revenue at stores opened at least a year in the Americas was unchanged in the quarter, and was in line with expectations.

Revenue at stores open at least a year rose 5 percent, on growth in most regions. This metric is a key indicator of a retailer’s health, because it excludes results from stores recently opened or closed.

The company is adding six stores in the Americas, including three in the U.S. They include a location in New Jersey’s Garden State Plaza, which opened earlier this month; one in Cleveland’s ETON Center, which opens Wednesday; and a store in New Orleans, in the shops at Canal Place.