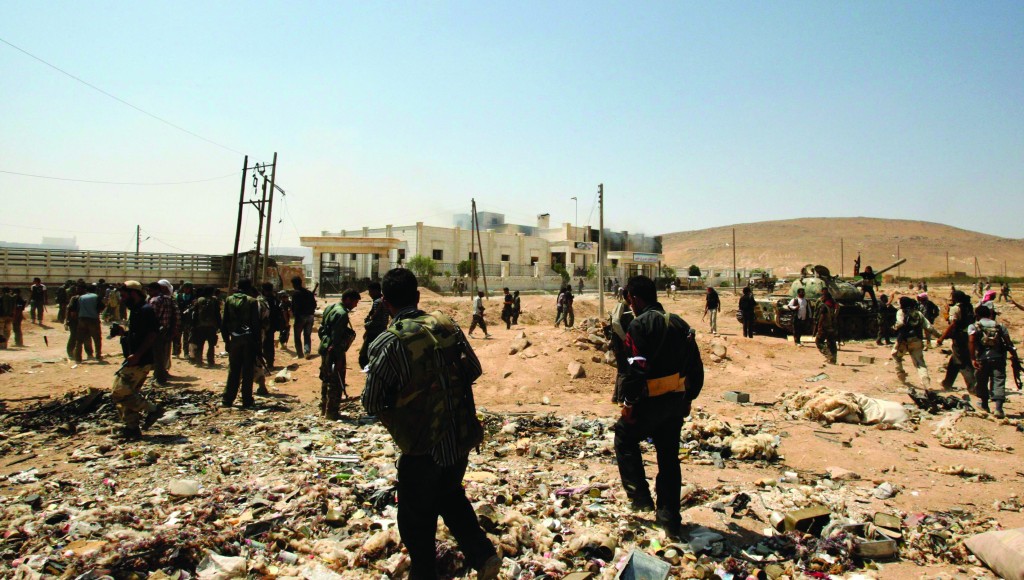 Momentum appeared to build Tuesday for Western military action against Syria, with the U.S. and France saying they are in position for a strike, while the government in Damascus vowed to use all possible measures to repel it.

The prospect of a dramatic U.S.-led intervention into Syria’s civil war stemmed from the West’s assertion — still not endorsed by U.N. inspectors — that President Bashar Assad’s government was responsible for an alleged chemical attack on civilians outside Damascus on Aug. 21 that the group Doctors Without Borders says killed 355 people. Assad denies the claim.

The Arab League also threw its weight behind calls for punitive action, blaming the Syrian government for the attack and calling for those responsible to be brought to justice.

British Prime Minister David Cameron recalled Parliament to hold an emergency vote Thursday on his country’s response. It is unlikely that any international military action would begin before then.

Obama is weighing a response focused narrowly on punishing Assad for violating international agreements that ban the use of chemical weapons. Officials said the goal was not to drive Assad from power or impact the broader trajectory of Syria’s bloody civil war, now in its third year.

Russian Foreign Minister Sergey Lavrov said Monday the West should be under no illusion that bombing Syrian military targets would help end the violence in Syria, an ally of Moscow, and he pointed to the volatile situations in Iraq and Libya that he said resulted from foreign military intervention.

Syrian Foreign Minister Walid al-Moallem said his country would use “all means available” to defend itself.

“We have the means to defend ourselves and we will surprise everyone,” he said.

At a news conference in Damascus, al-Moallem challenged Washington to present proof to back up its accusations and he also likened the allegations to false American charges in 2003 that Iraq possessed weapons of mass destruction before the U.S.-led invasion of that country.

Vice President Joe Biden said there was no question that Assad was responsible for the attack — the highest-ranking U.S. official to say so — and the White House dismissed as “fanciful” the notion that anyone other than Assad could be to blame.

“Suggestions that there’s any doubt about who’s responsible for this are as preposterous as a suggestion that the attack did not occur,” spokesman Jay Carney said.

A U.S. official said some of the evidence includes signals intelligence — information gathered from intercepted communications. The U.S. assessment is also based on the number of reported victims, the symptoms of those injured or killed, and witness accounts. The officials insisted on anonymity because they were not authorized to publicly discuss the internal deliberations.

The United Nations said its team of chemical weapons experts in Syria had delayed a second trip to investigate the alleged attack by one day for security reasons. On Monday, the team came under sniper fire.

If Obama decides to order an attack against Syria, it would most likely involve sea-launched cruise missile attacks on Syrian military and communications targets.

Hagel said the U.S. Navy had four destroyers in the eastern Mediterranean Sea positioned within range of targets inside Syria. U.S. warplanes were also in the region, he told BBC during a visit to the southeast Asian nation of Brunei.

In Cyprus, Defense Minister Fotis Fotiou said naval traffic in the eastern Mediterranean was very heavy with vessels from “all the major powers.” He also said Cypriot authorities were planning to deal with a possible exodus of foreign nationals from Syria.

U.S. military intervention in Syria was running into fierce opposition from some members of Congress. A growing chorus of Republican and Democratic lawmakers demanded that Obama seek congressional authorization for any strikes against the Assad regime.

Charles Heyman, a former British officer who edits The Armed Forces of the UK, said the lack of a U.N. Security Council resolution authorizing the use of force against the Syrian government greatly complicates matters for the West. He said that may make it difficult for Cameron to win parliamentary backing.

“It’s clear the governments want some form of military operation, but if the Security Council doesn’t recommend it, then the consensus is that it’s plainly illegal under international law,” Heyman said. “The only legal way to go to war is in self-defense and that claim is difficult to make.”

Russia, a permanent member of the Security Council, has steadfastly opposed any international action against Syria.

Italian Foreign Minister Emma Bonino said her country would not back any military action against Syria unless it was authorized by the Security Council — even though it considers a chemical attack to be a war crime.

German Foreign Minister Guido Westerwelle said Monday that if the Syrian government were proven to have been behind the gas attack, then Germany would support “consequences.” But with less than four weeks until national elections, it is unlikely Germany would commit any forces.

Center-left opposition parties have rejected military intervention without U.N. proof that the Syrian government was behind the attack. And a senior member of Chancellor Angela Merkel’s party said the German military was already at “the breaking point” due to commitments in Afghanistan and elsewhere.

Support for some sort of international military response is likely to grow if it is confirmed that Assad’s regime was responsible.

In Geneva, U.N. spokeswoman Alessandra Vellucci said the U.N. inspection team might need longer than the planned 14 days to complete its work. She said its goal is to determine what chemical weapons might have been used in the Aug. 21 attack.

The Obama administration is making a legal argument for undertaking a military response to the use of chemical weapons.

Carney said the United States and 188 other nations are signatories to a chemical weapons convention opposing the use of such weapons. Those countries have a stake in ensuring that international norms be respected and there be a response to a clear violation of those norms, he said.

In a veiled allusion to difficulties in getting any strong action through the Security Council, France’s Hollande said that “international law must evolve with the times. It cannot be a pretext to allow mass massacres to be perpetrated.”

He then went on to invoke France’s recognition of “the responsibility to protect civilian populations” that the U.N. General Assembly approved in 2005.

Harper’s office said he agreed with the assessment that the Assad regime used chemical weapons against its own people, and called it an outrage that requires a “firm response.”

In supporting calls for action against Syria, the 22-member Arab League, which is dominated by Gulf powerhouses Saudi Arabia and Qatar, provides indirect Arab cover for any potential military attack by the West.

At an emergency meeting, the Arab League also urged members of the Security Council to overcome their differences and agree on “deterrent” measures.

“The council holds the Syrian regime totally responsible for this heinous crime and calls for all involved in the despicable crime to be given a fair international trial like other war criminals,” the Arab League said in a statement.

Heyman predicted a possible three-phase campaign, with the first step — the encirclement of Syria by Western military assets by air and sea — already underway.

“Phase two would be a punitive strike, taking out high-value command and control targets and communications centers,” Heyman said. Phase three would be a massive takedown of Syrian air defenses. That would have to be done before you could take out artillery and armor, which is the key to long-term success.”