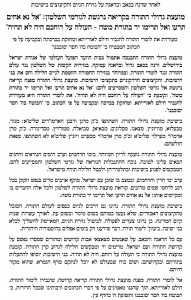 The Moetzes Gedolei HaTorah of Agudas Yisrael in Eretz Yisrael convened yesterday at the World Executive Committee offices of Agudas Yisrael in Yerushalayim, and discussed the painful and very worrying issues of the difficult government decrees against the Torah world and those who study Torah. They focused on the most acute of these decrees, the plan to draft yeshivah bachurim, and the draconian cuts in the yeshivah budgets. The Moetzes Gedolei HaTorah issued a passionate call to the government and those abetting it: “Al na achim, brothers, do not harm nor raise your hand against the Torah of Moshe.” They also declared that “what you plan will not come to fruition.” The Moetzes urged those learning Torah to increase their efforts, and issued a brachah of “Haboteach b’Hashem chessed yesovevenu, he who trusts in Hashem will be surrounded by chessed.”

The meeting was attended by, shlita, the Rebbes of Ger, Belz, Vizhnitz, Sanz, Slonim, Boyan, Biala, Modzhitz, and Sadigura.  The Erloyer Rebbe and the Seret Vizhnitz Rebbe, shlita, were unable to attend due to their weak health.

The Moetzes convened the urgent meeting, despite it being Erev Yom Tov, in light of the terrible harassment by the government that is trying to harm the yeshivos and their students, and to chalilah, uproot Torah from Am Yisrael.

On the eve of the Days of Judgment, and in the situation that Klal Yisrael finds itself, surrounded by enemies, when it needs an abundance of Heavenly Mercy, the Moetzes is calling on the government and all those who are members and are helping it exist: Brothers, do not harm or raise your hands against Toras Moshe.

At the meeting, ways were discussed to raise funds for the Torah world, which is suffering from the brutal cuts that are unprecedented since the establishment of the state. They also discussed ways to annul the draft decree, which threatens to throw yeshivah students into prison for the “sin” of learning Torah, something only heard of in dark chapters of Jewish history.

With all the worry and pain over the fact that descendents of holy forefathers who gave their lives for the holiness of Torah and for Am Yisrael are raising their hands in an effort to cut off Torah, the Moetzes Gedolei Torah declared that these plans will not come to fruition. The yeshivah students will continue to learn and make strides in their Torah, and no power in the world will be able to tear them away from the Gemara, which is the source of their sustenance.

The Moetzes addressed a call to Torah scholars to increase the learning, with the belief according to the words of the sources and our Rabbanim throughout the generations that one who trusts Hashem is surrounded by chessed, and that Hashem’s salvation comes in the blink of an eye.

This article appeared in print on page 1 of the August 29th, 2013 edition of Hamodia.