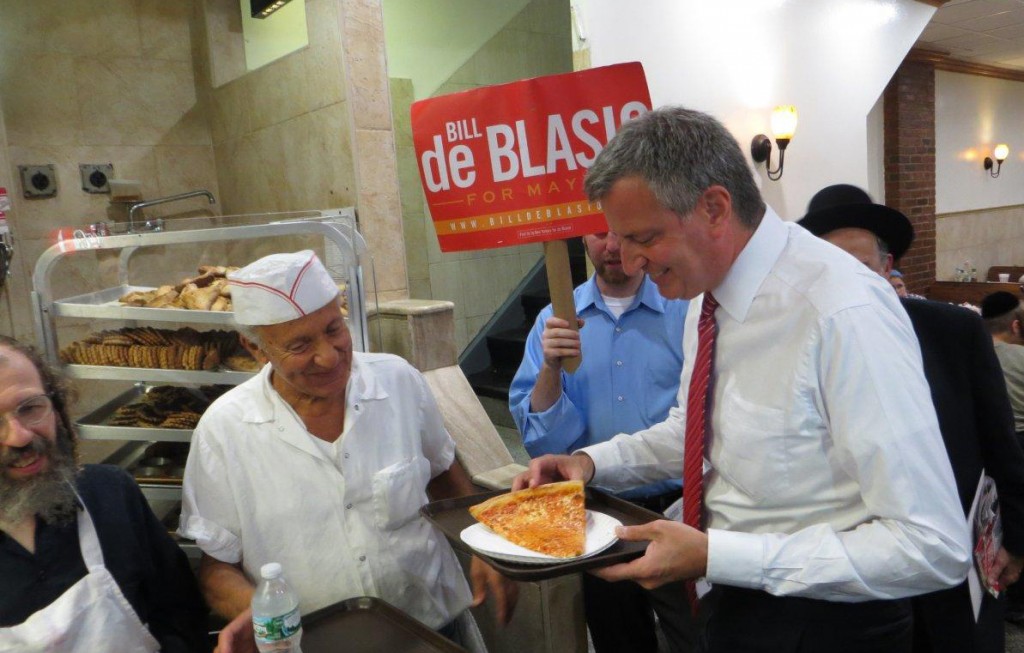 The Times ran a front-page story Monday examining the public advocate’s management of Hillary Clinton’s Senate campaign in New York state in 2000, and concluded that he was so indecisive that he was “edged aside” toward the end of the ultimately successful race.

In one anecdote, an attendee at a meeting recalled de Blasio presiding over a group of operatives who debated endlessly over negligible topics. He was labeled “agonizingly inefficient in a high-pressure, ever-shifting situation,” the Times wrote.

De Blasio said that the Times’ anecdote reveals what kind of person he is — a listener.

“We’ve had a mayor of New York City the last 12 years that has a lot of trouble listening to people,” he said. “There’s no contradiction between listening well and being a decisive leader.”

Quinn Revels in Backing of 3 Major Dailies, With a Caveat

On the day Christine Quinn was endorsed by the New York Post, a day after receiving The New York Times’ backing and two days after the Daily News announced her as their preferred candidate, the city council speaker already had an ad touting her support from the city’s three big daily papers.

“It’s unanimous for mayor! The New York Times, Daily News and the Post all endorse Christine Quinn as the Democrat who can get things done,” an exuberant narrator declares.

But what is left out is the context of their endorsements. While The Times gave her their full “she is the most qualified” approval, the Post and the News merely declared her the only non-clown in the field, with all three expressing their hope she would continue Mayor Michael Bloomberg’s policies.

Quinn has struggled to retain her frontrunner status in the face of a surging Anthony Weiner, and later Bill Thompson and Bill de Blasio.

All three papers endorsed Joe Lhota on the Republican side, although a Times endorsement may harm more than aid a candidate among the GOP electorate.

“We need to end the silly season of the mayoral campaign and get down to a vigorous race between Christine Quinn and Joe Lhota so New Yorkers can hear two competing visions of what the future will be,” the Post declared, before launching into a monologue about Quinn’s “hard lurch to the left” as the mayoral campaign began.

Wondering why Police Commissioner Raymond Kelly would accept her oft-repeated invitation to rehire him after she voted to install an inspector general, the Post editorial board wrote that she “remains deaf to the dangers” of uncontrolled spending.

Bill de Blasio, they wrote, “is so far out of the mainstream that even the thought of him as mayor should frighten every New Yorker.” And Bill Thompson has “flashes of sanity” but is chained to the teachers’ union and their demands.

Their endorsement of Lhota can more be described as ringing, with them saying that he “stands head and shoulders above the field.”

Howard Wolfson, Mayor Michael Bloomberg’s deputy, is no fan of Bill de Blasio or his progressive vision for the city, a view made plain in an interview Tuesday. Wolfson defended his recent post summing up de Blasio’s agenda as “higher taxes, bigger gov’t, more biz mandates. A u-turn back to the 70s.”