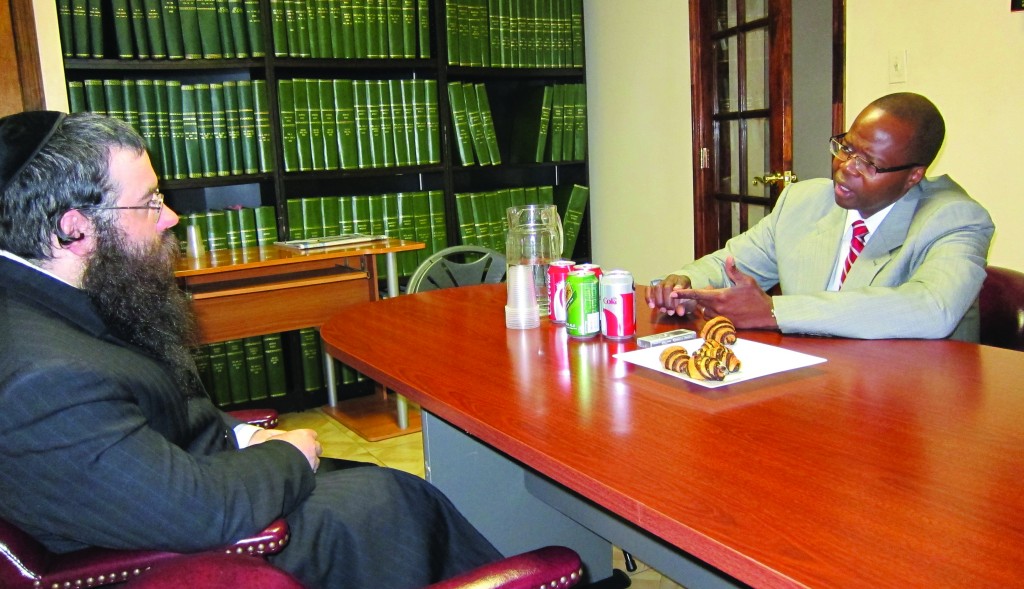 The race for Brooklyn district attorney in many quarters is nearly as closely watched as the looming mayoral campaign.

Charles Joseph Hynes, having been in office since Jan. 1, 1990, is coming full circle, with several of his initiatives related to the Orthodox community from 20 years ago back in the news as he seeks a historic seventh term. His challenger, Kenneth Thompson, a former federal prosecutor who has never run for office before, hopes to revamp the office if he wins, with a stronger focus on civil rights and preventing police brutality.

Both came to Hamodia for interviews ahead of the Democratic primary on Sept. 10 — Hynes to discuss his accomplishments during his long tenure, explain some of his controversial positions, and outline his vision for the future; Thompson, to describe his personal and professional background, to convince voters to dump his opponent, as well as to share his  ambitions.

The Brooklyn-born and raised Hynes, 78, has developed a delicate but close relationship with the Orthodox community over his 23 years in office, which more often than not was nurtured away from the media cameras. A white official in a borough which is increasingly turning predominately black, he nevertheless claims strong support in that community.

Thompson says he wants to “clean up the mess” left by Hynes, by helping end the stop-question-and-frisk police tactic credited by Mayor Michael Bloomberg for bringing down crime to record lows. In the interview, he repeatedly attacked Hynes but said he would review all Hynes’s innovations and would keep the useful ones if elected.

Hynes started off the interview by asking that we “please be blunt,” and we were. He presented statistics showing an 83 percent reduction in violent crimes over his time in office, and social policies he put in place to help offenders before they become career criminals. He discussed his office’s transparency, as well as his willingness to go back to old cases for review, prepared for some hard-won reversals in order to ensure that justice is ultimately dispensed.

Why do you want to take down a 23-year incumbent?

I am someone who was raised by a single mother. I started out life in the New York City public housing projects. My father walked out on my mother and left her with three young children to raise by herself and she struggled to take care of us, but she never stopped fighting to give us a better life. My mother became a police officer back in 1973, one of the first women to ever go on patrol in the history of the NYPD.

So I’m someone who was given an example of enormous courage and sacrifice by my mother. She put something in me as a little boy to stand up for justice, to stand up for fairness and to stand up for equality and I have never left those principles. So, I’m running for DA now because I have been given many blessings. I was able to go to college and graduate with honors. I went to John Jay College and then, I went to NYU Law School and I ended up working in President Clinton’s Treasury Department in Washington, D.C.

I was put on a big national investigation. You may recall that four ATF agents were killed by David Koresh of the Branch Davidians in Waco, Texas. President Clinton ordered an investigation of that law enforcement tragedy. Four ATF agents killed, 20 others shot while trying to execute search warrants at the Branch Davidian compound. I was part of the investigative team  and I wrote part of the Waco Report to the president.

So, I have had experiences dealing with some of the most important investigations in the country. When I finished that, I came back to Brooklyn and joined the U.S. Attorney’s office. I spent a number of years there in the violent crime section. I went after bank robbers, murderers, armed robbery gangs and I did the Abner Louima trial when I was a federal prosecutor.

Now, I look at where we are and we need a new DA here in Brooklyn. I’m someone who believes that we must all be kept safe, but we all have to be treated with dignity and respect. We need fundamental fairness in the criminal justice system. If you look at what’s been happening, innocent people have been going to prison for murders that they didn’t commit right here in Brooklyn. It’s because of police and/or prosecutorial misconduct. We should not accept that.

Those conviction overturns of your opponent are a very small percentage overall.

Absolutely right. But let me tell you the difference in Brooklyn. If you do enough cases, if you do enough trials, juries sometimes will get it wrong. That’s why it’s great that we have DNA evidence to prove that someone who was convicted is actually innocent. But what I’m talking about is totally different. I’m talking about wrongful convictions based on prosecutorial and/or police misconduct.

There is a pattern coming out of the Brooklyn DA’s office of people being wrongfully convicted because of police and/or prosecutorial misconduct. That’s why the current DA, Joe Hynes, is reviewing 50 tainted homicide cases that involve one particular New York City detective, Louis Scarcella. Why does he have to review 50 cases? Because he believes that there may be innocent people who were convicted in those cases. So, that’s not the same as a jury getting it wrong and DNA evidence proving it. We’re talking about police or prosecutorial misconduct.

What would you do if elected?

You think right now that the lawyers working for the Brooklyn DA are not adequately trained?

I don’t believe so. That’s my position.

I’m interested in making sure that the office has a voice when it comes to stop-and-frisk because when you have tens of thousands of innocent young black and Latino men who are being stopped and frisked on the streets of Brooklyn without reasonable suspicion, then what you’re doing is you’re undermining the relationship that the police has to have with the community.

You spoke about the black community being alienated and what you would do to gain their confidence in the DA’s office. Anything specific you would do for the Orthodox community? Would you continue Kol Tzedek?

Let me give you an example. I intend to go into all the communities of Brooklyn and find out what are the needs in those communities. If there’s a way for me to create programs to address those needs, I will.

For example, there may be a need in the Orthodox Jewish community for us to hold events where we educate people on what constitutes white-collar crime because people may be doing things because they don’t understand what they’re doing and then, they end up being arrested and prosecuted.

Councilman David Greenfield said he heard you saying at several private meetings that you would, quote, “target the Jews.”

Let me just say this. The accusation that I said I’m going to target the Jewish community is an outright lie. I never said that. That’s not what I stand for. I believe in making sure that everyone is treated equally and fairly. So, this is fear-mongering because the Hynes’ campaign is afraid of the growing strength in my campaign.

The same DA, Joe Hynes, has said that the Orthodox Jewish community is worse than the mafia. Look at what the sitting DA has said about an entire community. That is outrageous. The mafia kills people. Then, he wants to falsely accuse me because he’s at the point of desperation.

My whole life shows what I believe about the Jewish community. My whole life in terms of when my mother had enough money to move my family out of the projects, where did she take us to? My mother eventually took us to Coop City in the ’70s, which was predominantly Jewish. I was one of the few black families in the whole building and everyone on my floor, virtually everyone on my floor was Jewish. My Jewish neighbors loved me and I loved every one of them.

You look at my law partner, Doug Wigdor. He is Jewish, so this is a complete, made-up thing, but it’s dangerous because it is fear-mongering. It is solely created to try to divide communities. Joe Hynes should be ashamed of himself for doing that.

He did apologize for it.

Well, he didn’t apologize last week when we were on NY1 and we debated.

Never. If he walked in here right now, I’m not sure I would ever recognize him.

What do you say about Mr. Hynes’s handling of abuse within the Orthodox community?

First of all, Joe Hynes, his policy in the beginning was he was not going to disclose the identity of individuals who were even convicted, but a couple of weeks ago, he suddenly changed his policy and now he’s willing to disclose the names of those who are convicted. That doesn’t make any sense. His central argument has been the reason why he won’t disclose the names of those accused — and until recently, even those who were convicted — is because he didn’t want to have the victims subjected to witness intimidation.

Well, the argument is not a valid argument because once a person is arrested and brought into the system, they’re given a complaint. They’re given an indictment, so a defendant has to be given a complaint and an indictment and sit down with their lawyer and see what they’re being charged with. That complaint and that indictment has to give them enough information so they’ll know exactly what they’re being accused of.