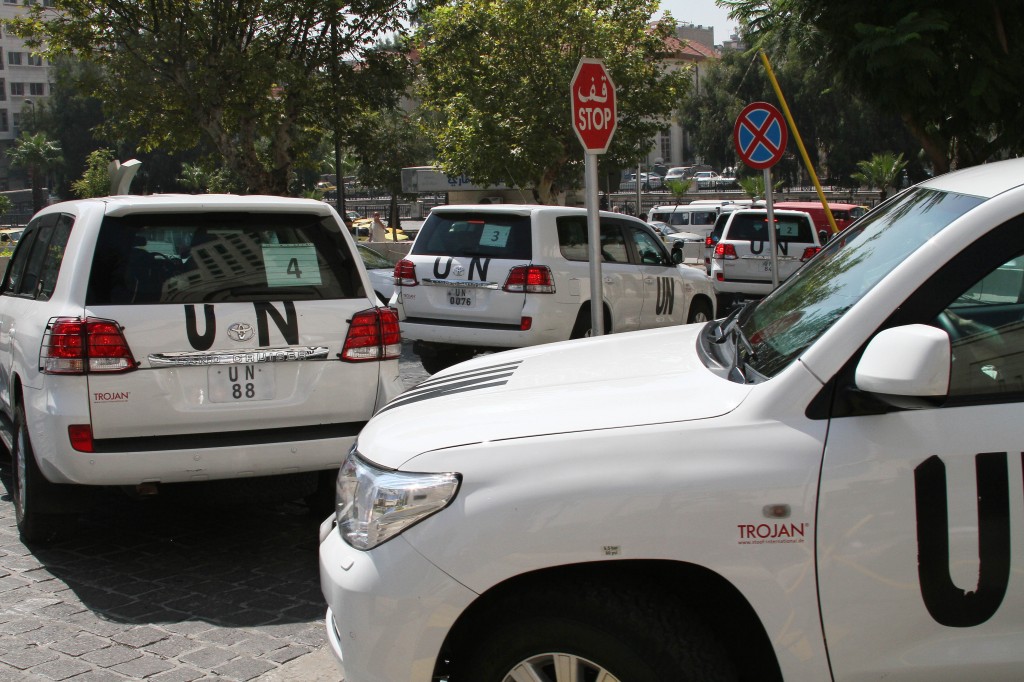 Snipers opened fire Monday at a U.N. vehicle belonging to a team investigating the alleged use of chemical weapons in Damascus, a U.N. spokesman said. The Syrian government accused the rebels of firing at the team.

Activists said later that the team had arrived in Moadamiyeh, a western suburb of the capital and one of the areas where the alleged attack occurred. They said the team was meeting with doctors and victims at a makeshift hospital.

Martin Nesirky, spokesman for U.N. Secretary-General Ban Ki-moon, said the vehicle was “deliberately shot at multiple times” in the buffer zone area between rebel- and government-controlled territory, adding that the team was safe.

News of the sniper attack came only a few hours after an Associated Press photographer saw the team members wearing body armor leaving their hotel in Damascus in seven SUVs, headed to the site of the alleged attack.

The photographer said U.N. disarmament chief Angela Kane saw them off as they left but did not go with them.

Nearly an hour before the team left, several mortar shells fell about 700 meters from their hotel, wounding three people.

World leaders have suggested that an international response to the attack was likely.

The United States has said that there is little doubt that Assad’s regime was responsible for the attack on Aug. 21 in the capital’s eastern suburbs. The group Doctors Without Borders said 355 people were killed in the artillery barrage by regime forces that included the use of toxic gas.

Nesirky said one of the cars used by the team was “no longer serviceable.”

“It has to be stressed again that all sides need to extend their cooperation so that the Team can safely carry out their important work,” he said in emailed comments to The Associated Press.

The Syrian government said the U.N. team was subjected to fire by “terrorist gangs” while entering the Damascus suburb of Moadamiyeh west of Damascus, one of the areas that the opposition says were targeted by toxic gas in last week’s attack.
The government also says Syrian forces provided safety for the team until they reached a position controlled by the rebels, where it claimed the sniper attack occurred.

President Bashar Assad denied in remarks published Monday that his troops used chemical weapons during the fighting in the rebel-held suburbs.

Wassim al-Ahmad, a member of the Moadamiyeh local council, said five U.N. investigators eventually arrived at a makeshift hospital in the suburb, where doctors and about 100 people still with symptoms from the alleged chemical attack were brought in to meet with the U.N. team.

The Britain-based Syrian Observatory for Human Rights says the eastern suburbs have witnessed a wide army offensive over the last week, but have been relatively quiet since Sunday night.

Mohammed Abdullah, an activist in the eastern suburb of Saqba, said the U.N. is expected to visit the rebel-held area on Monday and will be under the protection of the Islam Brigade, which has thousands of fighters in the area.

Syrian activists and opposition leaders have said that between 322 and 1,300 people were killed in the alleged chemical attack.