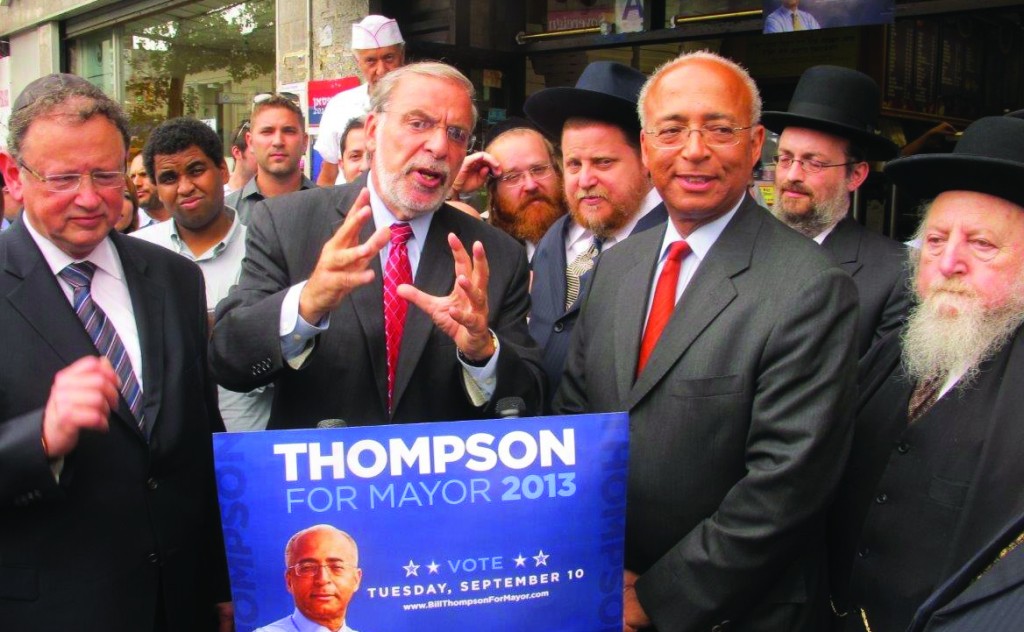 Bill Thompson’s mayoral campaign got significant Jewish and black support on Thursday in a whirlwind visit to Boro Park and Flatbush to collect the endorsements of Assemblyman Dov Hikind and Rep. Hakeem Jeffries.

Hikind had been furiously lobbied for his support by Thompson and Bill de Blasio, both of whom had spent Shabbos at his home over the past few weeks. In the end, Hikind said, it came down to Thompson’s longtime relationship with him.

“Bill Thompson is a decent, thoughtful man with a real plan to improve our city’s schools,” Hikind said. “While I know and have worked with other candidates in this race, I also know that Bill understands the big picture on education. That’s important to me and to the families I represent.”

Thompson’s endorsement earlier this year by the teachers’ union, which traditionally had been unfriendly to yeshivos, has been a cause for concern among yeshivah groups in the city.

Following the Hikind event, Thompson went to Flatbush where he was endorsed by Jeffries, a freshman Democratic congressman who is seen as a rising star in the African-American community. Jeffries focused on stop-and-frisk as the reason for his backing.

“I think he has the exact right position for someone who is running to be the CEO of the City of New York,” he told Politicker.

Soaring over the six other Democratic mayoral candidates, the surprising new front-runner in the mayor’s race received the bulk of the attacks Wednesday in a free-wheeling and often testy debate less than three weeks before the primary.

“The public advocate is good at telling people what to do but not good at getting things done,” City Council Speaker Christine Quinn said.

“Would the real Bill de Blasio please stand up?” Bill Thompson asked. He demanded that de Blasio take down an ad that portrays him as the only candidate who will end stop-and-frisk.

Quinn and Thompson then forged an unlikely alliance, as Quinn took the debate moderator’s offer to ask another candidate a question and gave her turn to Thompson.

“I want to know if you’re satisfied with the answer you just got,” she said. Thompson said no.

De Blasio bristled at the alliance. “Tag teams were only allowed in professional wrestling,” he said.

The Daily News endorsed Christine Quinn Wednesday night, saying in the first newspaper endorsement of the race that the city council speaker is the best qualified to lead New York.

While praising de Blasio as “the best campaigner and the candidate with the most clearly presented governing philosophy,” and Thompson’s “considered judgments … steady temperament and a proven talent for connecting with New Yorkers of all stripes,” they ultimately went with Quinn.

“She combines the clearest understanding of the difficulties facing the city with the most extensive record of getting things done,” they wrote in a post shortly after the mayoral debate ended. “Her proposals for the working and middle classes could actually come to fruition, as opposed to the many pie-in-the-sky pronouncements of her competitors.”

Stringer Raps Rival for Standing Near Bigot, With Bigot Nearby

Comptroller candidate Scott Stringer’s supporters on Thursday slammed his opponent, Eliot Spitzer, for unknowingly appearing the day before at an event alongside a race-baiter — not knowing that the same bigot was standing right beside them.

Stringer’s supporters railed against Spitzer for standing next to Thomas Lopez-Pierre, a council candidate who dropped out earlier this year after a series of anti-Semitic remarks. Spitzer’s campaign said later they did not know who Lopez-Pierre was.

“We are gathered here … to repudiate one of the things that Eliot Spitzer has done, which is he has embraced individuals who are hate mongers,” said community activist Brian Benjamin.

Ironically, unknown to Benjamin, Lopez-Pierre was standing right behind him as he made the remarks. It made for a wild moment.

The event quickly devolved into a screaming match between Lopez-Pierre and others. Lopez-Pierre began jumping up and down and shouting, claiming the man in front of him had stepped on his foot. “Somebody call the cops, please!” a supporter yelled.

“To be clear,” Spitzer’s campaign spokeswoman, Liz Smith, said in a statement Thursday, “Scott Stringer attacked us all day yesterday for a random guy showing up at a press conference. Today, the same random guy showed up at his press conference. This is what happens when you make a non-issue the centerpiece of your campaign. When you have no record to run on, chaos and dysfunction will reign supreme.”

“Race to City Hall 2013” is a daily Hamodia column focusing on the New York City mayoral race, ahead of the Democratic and Republican primaries on Sept. 10, a likely runoff on Oct. 1, and the general election on Nov. 5. It is culled from reports from The Associated Press, Politicker, the Daily News, City & State and others.