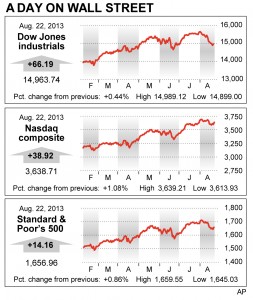 The stock market rose Thursday but it was a glitch on the Nasdaq exchange that became the day’s big talking point.

Trading on the Nasdaq was interrupted just after midday because of problems with a quote dissemination system. That halted activity on the Nasdaq until shortly before the close of the market. When trading resumed, shares in Nasdaq OMX, which owns and operates the exchange, slumped.

In China, a survey by HSBC indicated that manufacturing was expanding, the latest evidence that the world’s second-largest economy may be over its recent period of weakness. In Europe, a survey of manufacturing and services for the 17 countries that use the euro climbed to its highest level since June 2011.

“Europe seems to be getting its swing back, especially Germany,” said Doug Cote, chief market strategist at ING U.S. Investment Management. The figures “are not super exciting, but directionally they are good.”

The stock market has had a poor August. Traders and investors have fretted that the Federal Reserve is about to start easing back on the economic stimulus that has helped underpin a 4 ½-year bull market. The Fed is buying $85 billion of bonds a month to hold down long-term interest rates.

Investors also got some encouraging news on the U.S. economy Thursday.

A gauge of the economy’s health rose in July, pointing to stronger growth in the second half of the year. The Conference Board’s index of leading indicators increased 0.6 percent last month to a reading of 96. The index was unchanged in June and rose 0.2 percent in May.

The number of Americans applying for unemployment benefits rose last week but remains close to its lowest level in 5 ½ years.

“The economy in general is showing signs of modest improvement,” said Terry Sandven, chief equity strategist, at U.S. Bank wealth management. “Valuation is fair, sentiment is favorable and inflation is benign and that’s a favorable backdrop for equities.”

The market rose despite some poor results from a pair of retailing companies.

Sears dropped $3.55, or 8.2 percent, to $39.72 after the company said its second-quarter loss widened as the number of stores in operation declined and the company dealt with lingering effects from its spinoff of the Hometown and Outlet brand.

Abercrombie & Fitch fell $8.27, or 18 percent, to $38.53 after the company said that declining traffic and weakness in girls’ clothing pushed its net income down 33 percent in the second quarter.

The yield on the 10-year Treasury note rose to 2.90 percent from 2.89 percent Wednesday. The yield is the highest it’s been since July 2011, and is up sharply since going as low as 1.63 percent in early May.

Rising bond yields have unsettled stock investors because they have a direct impact on the cost of borrowing for everyone, from home owners trying to refinance their mortgages to companies trying to sell debt, making them a potential long-term drag on the economy.

This article appeared in print on page 8 of the August 23rd, 2013 edition of Hamodia.