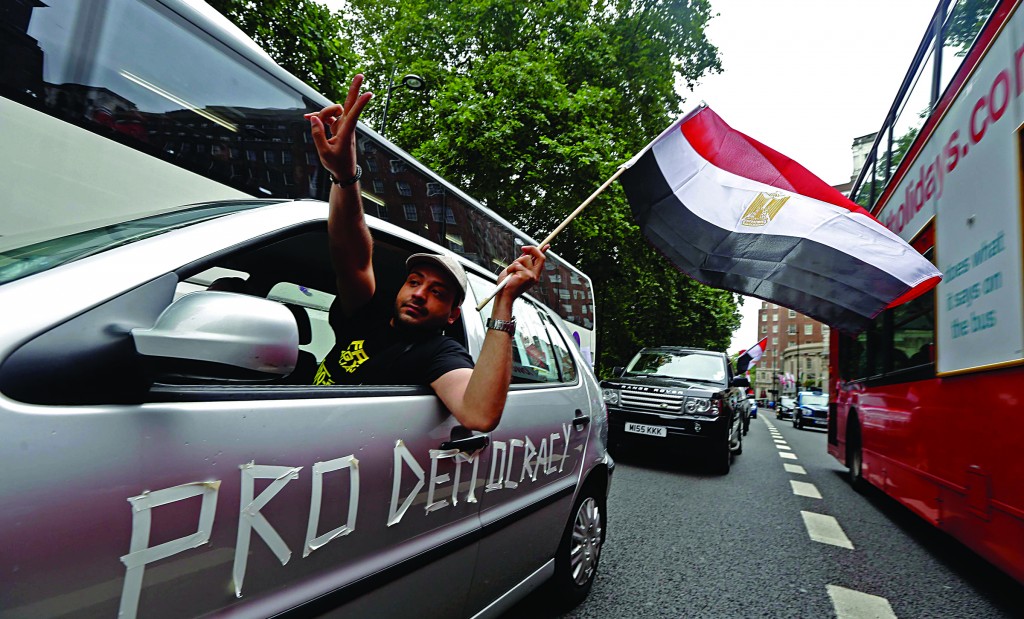 Congress split on cutting off aid to Egypt

Egypt’s army-backed rulers met on Sunday to discuss their bloody confrontation with deposed President Mohammed Morsi’s Muslim Brotherhood amid contrasting proposals for compromise and a fight to the death.

In a broadcast speech to military and police officers, army chief Abdel Fattah el-Sisi vowed to crack down on anyone using violence, but he also struck an apparently inclusive note, telling Morsi’s supporters: “There is room for everyone in Egypt.”

The Brotherhood, under huge pressure since police stormed its protest camps in Cairo and killed hundreds of its supporters on Wednesday, staged several more marches across the country to demand the reinstatement of Morsi, ousted by Sisi on July 3.

Egypt, the most populous Arab nation, is grappling with the worst bout of internal bloodshed in its modern history, just 30 months after President Hosni Mubarak’s overthrow was hailed as heralding democratic change across a region ruled by autocrats.

Seventy-nine people died and 549 were wounded on Saturday in political violence around the country, state news agency MENA said on Sunday, quoting the government. That pushed the official death toll since Wednesday to 830, including 70 police and soldiers.

Meanwhile, some 38 Muslim Brotherhood supporters died at a prison on Sunday

The Interior Ministry said a group of detainees had tried to escape from a prison on the outskirts of Cairo, adding that an undisclosed number had been suffocated by tear gas when police moved in to free an officer who had been taken hostage.

Offering a very different version of events, a legal source told Reuters the men had died from asphyxiation in the back of a crammed police van while being driven to prison.

Before the cabinet met, the liberal deputy prime minister, Ziad Bahaa el-Din, had floated a conciliatory proposal, seen by Reuters, advocating an end to a state of emergency declared last week, political participation for all parties and guarantees of human rights, including the right to free assembly.

But his initiative seemed at odds with the stance of Prime Minister Hazem el-Beblawi, who suggested outlawing the 85-year-old Brotherhood, which would effectively force it underground.

“There will be no reconciliation with those whose hands have been stained with blood and who turned weapons against the state and its institutions,” Beblawi told reporters on Saturday.

The cabinet meeting lasted about four hours but ended with no immediate announcement of any major decision.

A middle-ranking security officer, who asked not to be named, said no political proposals or foreign condemnation would be allowed to deflect the suppression of the Brotherhood.

“We have the people’s support. Everybody is against them now as they see the group as an armed terrorist organization with no future as a political power,” the officer said.

The capital’s frenetic streets, unusually empty in the past few days, were returning to normal, although the army kept several big squares closed and enforced a dusk-to-dawn curfew.

Banks and the stock market reopened for the first time since Wednesday’s carnage, and shares plunged 3.9 percent.

Egypt’s new rulers blame the Muslim Brotherhood, which won five successive national polls after Mubarak’s fall in 2011 but drew charges that it was incompetent and bent on consolidating its own power during Morsi’s year in office.

Sisi said: “We will not stand idle in the face of the destruction and torching of the country, the terrorizing of the people and the sending of a wrong image to the Western media that there is fighting in the streets.”

Brotherhood leaders accuse the military and other state institutions of sabotaging their time in government. 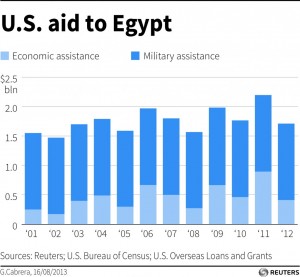 In calibrated rebukes to the army, the United States has delayed delivery of four F-16 fighters and scrapped a joint military exercise, but it has not halted its $1.55 billion a year in aid to Egypt, mostly to finance U.S.-made arms supplies.

The European Union has also said it will review relations.

But on Sunday, a bipartisan series of U.S. lawmakers, several of them reversing stances from before the crackdown, said on news programs that Washington should suspend the aid.

“For us to sit by and watch this happen is a violation of everything we stood for,” said Senator John McCain, a Republican from Arizona. “There are many areas where we could exercise influence over the generals, and we’re not doing any of it, and we’re not sticking with our values.

McCain said that Washington could threaten the loss of support for an International Monetary Fund loan or halt shipments of military spare parts in a bid to end the assault on protesters.

“We certainly shouldn’t cut off all aid,” said King, who chairs the House panel on counterterrorism and intelligence.

King said there are no good choices in Egypt. Morsi, a member of the Muslim Brotherhood, was democratically elected. But, King said, the group has not demonstrated a commitment to democracy.

“The fact is, there’s no good guys there,” King said. “But of the two, I think there is more opportunity to protect American interests if we work with the military and continue.”

The split among members of the same political party illustrates the uncertainty facing President Obama as he tries to navigate volatile developments in Egypt.

Foreign Minister Nabil Fahmy sought to preempt any Western attempt to use aid flows as a lever by saying he would look at all such assistance to see “what aid is being used to pressure Egypt and whether this aid has good intentions and credibility.”

He told a news conference Egypt was not seeking to reshuffle its friendships but would widen them to increase its options.

“The relationship between Egypt and the U.S. has been there for a long time. It has been through ups and downs in the past. We hope things will go back to normal promptly,” Fahmy said.