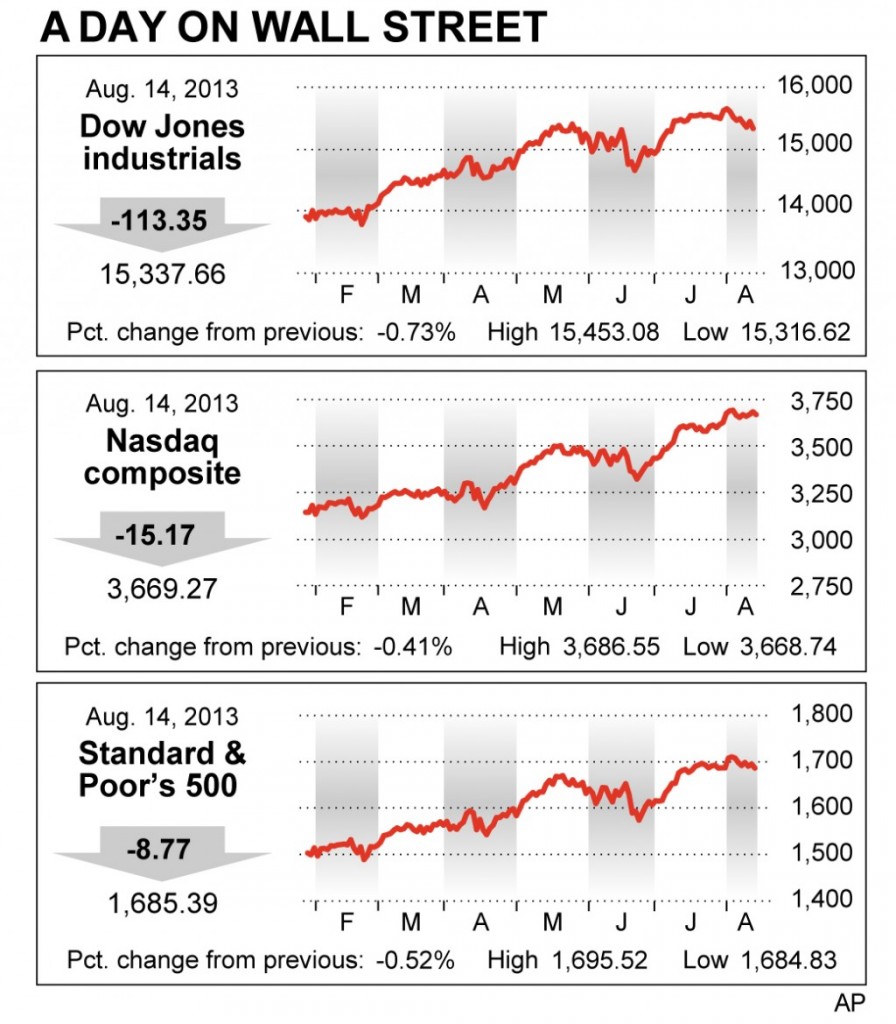 The stock market fell on Wednesday as a poor earnings report from Macy’s cast doubt on the outlook for consumer spending, a vital component of the U.S. economy.

Other department store stocks also fell after Macy’s reported disappointing earnings for the second quarter and cut its forecast for the year.

The stock market’s early summer rally has fizzled out after a strong July, and August is shaping up to be a lackluster month as many traders and investors take their summer breaks. The major indexes have drifted lower in the past week after climbing to all-time highs at the start of the month.

Consumer discretionary stocks in the Standard & Poor’s 500 index, which include clothing retailers and restaurant chains, have fallen in the past month, paring their gains for the year. Makers of consumer staples, which investors favored early in the year because of the steady earnings they offered, have also dropped in the last month.

The sell-off was broad. Technology was the only one of the 10 industry sectors that rose in the S&P 500.

Macy’s, which operates its namesake stores and Bloomingdales, dropped $2.17, or 4.5 percent, to $46.33 after its profit fell short of analysts’ estimates. Macy’s blamed shoppers’ reluctance to spend for a slip in sales.

There were some bright spots for investors.

Apple rose above $500 for the first time since January, climbing as high as $504 during the day, before closing up $8.93, or 1.8 percent, $498.50. The company’s stock jumped 4.75 percent Tuesday after activist investor Carl Icahn said he thinks Apple should be doing more to revive its stock price. Icahn also said he had a large, but unspecified stake, in the company.

In government bond trading Wednesday, the yield on the 10-year Treasury note slipped to 2.71 percent from 2.72 percent Tuesday.

The yield has risen sharply since May 3, when it hit its low for the year of 1.63 percent, as investors anticipate that the Fed will step back from its bond purchases.

Big dividend payers like utilities and phone companies have been slumping since May as Treasury yields have risen. The higher bond yields have diminished the appeal of rich-dividend stocks as a source of income.

Home builders have also been falling because government bond yields are used to set mortgage rates. If mortgage rates increase sharply, it could cool demand for homes and squelch a recovery in the housing market.

After the close of trading, Cisco Systems reported quarterly earnings. The results just managed to beat Wall Street’s expectations and the company’s stock price was down $2.60, or 10 percent, to $23.78 an hour after the close. The company sells routers, switches, software and services to corporate customers and government agencies.