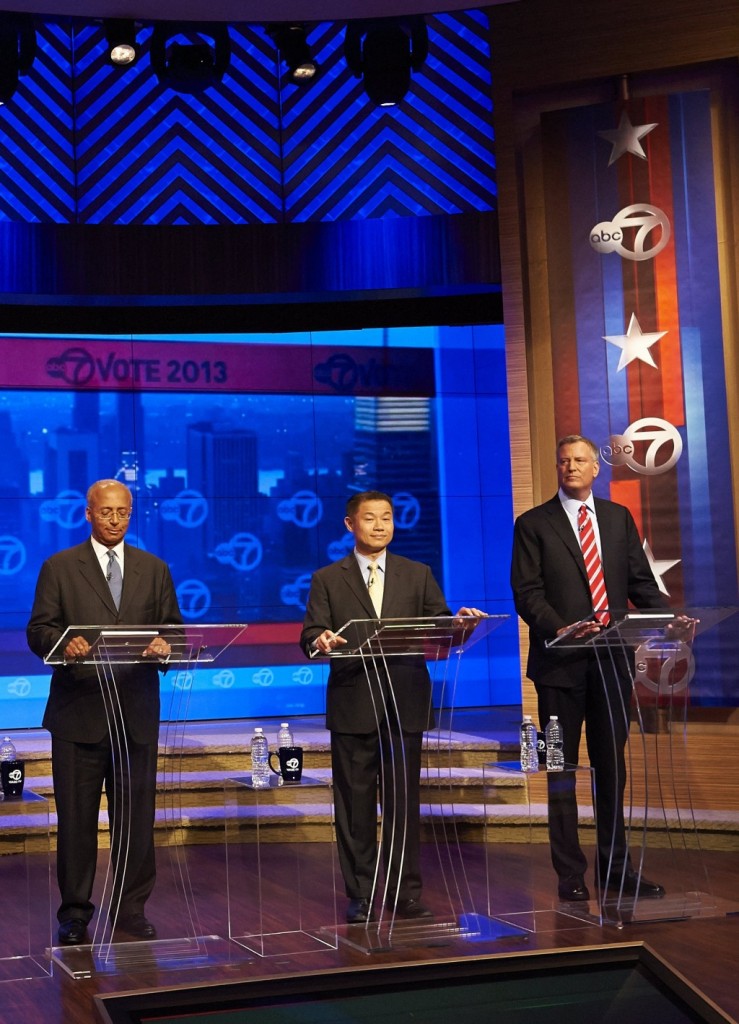 Bill de Blasio made his debut as frontrunner Tuesday night in the first broadcast mayoral debate, four weeks before the pivotal primary will likely spawn a runoff.

Five of the top candidates combatively traded barbs, with the night’s most searing exchange coming when former Rep. Anthony Weiner tore into Council Speaker Christine Quinn’s assistance in overturning city term limits in 2009 to give Mayor Michael Bloomberg another four years in office.

“I apologized for my personal behavior,” Weiner said. “The speaker refuses to apologize for overturning the will of the people.”

Quinn, who frequently allies herself with Bloomberg, smiled throughout the attacks, zinging back when Weiner asked her to apologize.

“No New Yorker should be lectured by Anthony Weiner,” she said. “Neither me nor anybody else on this stage … ”

Weiner remained a lightning rod throughout the hour-long debate. De Blasio, the public advocate, who moved to first in a poll released hours before the debate, called for Weiner to drop out of the race. Bill Thompson chided Weiner for not challenging Bloomberg in 2009. And Quinn mocked his congressional record.

Quinn’s rivals repeatedly hit her for her hopes to retain police Commissioner Ray Kelly, with Thompson calling Kelly “the face of an abusive policy.” Quinn, who drew constant contrasts between her legislative records and her rivals’ thin resumes, said she “would be lucky” to keep Kelly but said she didn’t agree with his steadfast defense of stop-and-frisk.

De Blasio, who was an afterthought in the race for much of the summer, repeatedly grabbed the mantle of the campaign’s “progressive choice.”

What Does Weiner Know of Clinton Presidential Ambition?

A Hillary Clinton spokesman took a shot at Anthony Weiner on Tuesday for claiming he knew what role his wife Huma Abedin would play in a 2016 Clinton presidential run, denying he had any inside knowledge.

“We have absolutely no clue what he was talking about,” spokesman Nick Merrill told Politico. “Maybe his campaign does. Doubt it, though.”

Weiner’s comment came at a BuzzFeed forum Monday night, where he was asked if he knew what role Abedin, Clinton’s chief of staff when she was secretary of state, would play in a Clinton campaign.

Prompted on what her role may be, he replied, “I’m not going to tell you.”

Weiner testily told reporters Tuesday that he had been kidding.

His comment created an even bigger potential professional headache for Abedin, who is on an extended vacation until the end of the primary race. And it violated a cardinal rule of Clintonworld — joking about Hillary Clinton in a way that appeared to confirm what people already suspect, that she is in the early planning stages of a presidential run.

Spitzer’s wide lead comes overwhelmingly from support among African-American voters, leading Stringer in that category 68 percent to 21 percent. It is the first time a poll had him above 50 percent.

The silver lining for Stringer is that more of his supporters said they were “definitely” going to vote for him — 74 percent — compared to 68 percent for Spitzer.

Republican mayoral candidate John Catsimatidis on Wednesday blasted what he called “the hospital closing crisis in New York City,” calling for the creation of a task force to review the state of medical care in the city.

“Hospital closings in New York City are reaching epidemic proportions,” said Catsimatidis, who is battling Joe Lhota for the Republican nod in the Sept. 10 primary.

Since 2000, 19 New York City hospitals have closed, with another two likely in the near future.