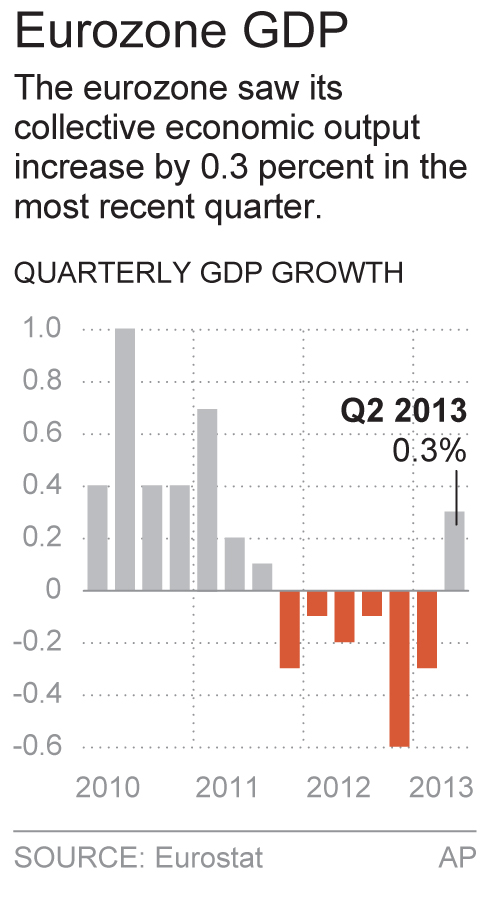 Europe’s economy is showing signs of recovery for the first time since 2011, ending for now the Eurozone’s longest recorded recession, according to figures released Wednesday by the European Commission.

The second quarter of 2013 showed distinct, if fragile, 0.3 percent economic growth collectively over the previous quarter for the 17 countries that share the euro currency.

The improvement was driven chiefly by Germany, where gross domestic product grew by 0.7 percent over the previous quarter, and France, with growth of 0.5 percent. Consumer spending, manufacturing and exports appear to have grown in both countries.

Recovery forecasts were still gloomy for the southern European countries that use the euro, with Italy and Greece afflicted by negative growth and high unemployment. But even there, figures showed at least a slowing in the economy’s downward trend.

The news was cautiously welcomed by Olli Rehn, vice president of the European Commission.

“This slightly more positive data is welcome – but there is no room for any complacency whatsoever,” he said in his comment on the commission website, calling for no “self-congratulatory statements suggesting ‘the crisis is over.'”

Constantine Michalos, president of the Athens Chamber of Commerce and Industry, expressed skepticism to the BBC about his country’s troubled economy. Greece, along with Italy and Spain, was “still struggling to exit this tunnel of crisis,” he said on the morning radio news “Today” program.

Michalos pointed out that Greece has the highest unemployment rate in the European Union, at 27 percent, exacerbated by “the 63 percent figure which concerns youngsters between 16 and 25.”

Amid the gloom in southern Europe, surprise figures for Portugal showed growth of 1.1 percent for the second quarter, even though the country is still dogged by debt and unemployment.

David Marsh, author of two books on the euro, spoke to the BBC of a two-tier European recovery. Trade with northern Europe was not boosting southern Europe’s economy as hoped.

“The euro area is more than the Eurozone trading with itself,” he said, as Germany and the other creditor countries’ trade is expanding outside the euro area to Brazil, China, Russia and the United States.

“The southern group, the debtor group, are mired in recession – the IMF (International Monetary Fund) has said recently that Spain will continue to have 25 percent unemployment for five years … the price of getting their house in order,” he said.

“There is two-speed Europe, big time.”