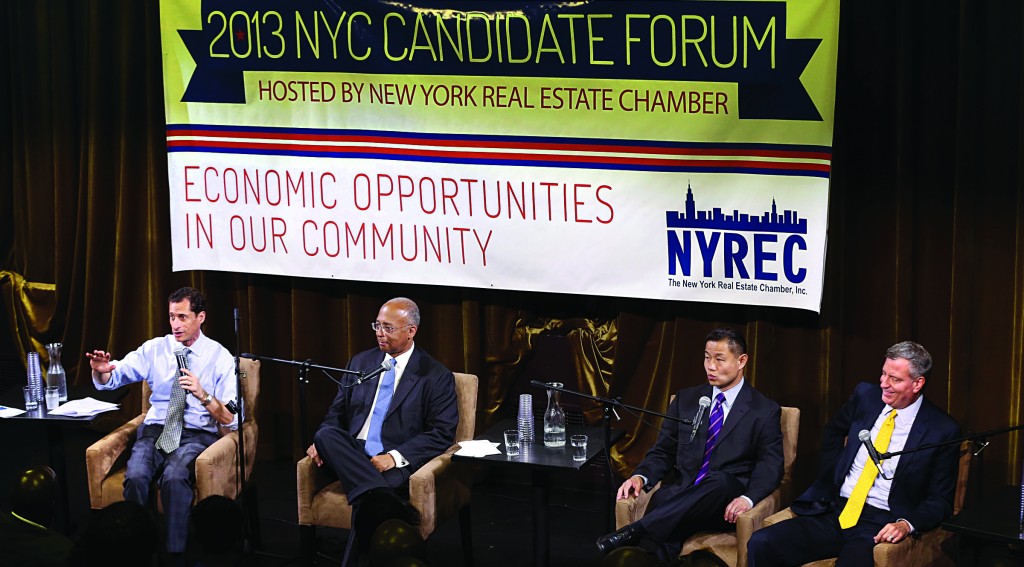 The Democratic candidates for New York City mayor on Tuesday night were scheduled to hold their first debate since Christine Quinn and Anthony Weiner successively led the field and then dropped, making way for Bill Thompson and Bill de Blasio.

The broadcast debate is the first of three that will take place in the final stretch to the Sept. 10 primary.

De Blasio Gets a Musical Endorsement

Puns were the order of the day Monday as Bill de Blasio received the musicians’ union’s endorsement for mayor.

“This endorsement is music to my ears,” the public advocate declared, as he stood near a drum kit at Times Square.

“People listen to this union in more ways than one,” de Blasio responded.

The endorsement by Local 802 was announced in song, along with a band equipped with a trombone, saxophone and upright bass. De Blasio bopped along as the band played several musical numbers.

Down to the Wire, Aspirants Begin Spending Their Cash

All four of the top-tier mayoral candidates unveiled their first ads this week, with each focusing on their perceived strengths and weaknesses among voters.

A former comptroller with one of the lowest name recognitions in the field, Bill Thompson’s commercial was aimed at telling his biography. Titled “City of Opportunity,” it focuses on Thompson’s background as a grandson of Caribbean immigrants and ties it in with his agenda.

Former Rep. Anthony Weiner began running his first ad on Monday, in which he promises to focus “like a laser beam” on helping the middle class. “Look, powerful voices have made it clear from the very beginning that they didn’t want me to win. But this isnabout what they want. They’ve gotten their way for far too long,” he says. “If you give me the chance, I will fight for you and your family every single day.”

Christine Quinn unveiled her second ad earlier Tuesday, narrated by Levia Preito, whose 24-year-old son passed away while waiting for insurance coverage. She praises the council speaker for helping pass “Manny’s Law” in her son’s honor.

“Because of Christine Quinn, Manny didn’t die in vain,” Preito says. “I love her for that.” The spot aims to show a compassionate side to the speaker more known for her brashness.

“Time and time again, we’ve seen the powerful protected because of political connections,” Velazquez said at a press conference with Thompson and Nadler. “But with Ken Thompson as our district attorney, everyone will be held to the same standard.”

A contentious decision to allow Mayor Michael Bloomberg to run for a third term was the hot-button topic Monday in a debate for the powerful office of city comptroller. Former Gov. Eliot Spitzer seized upon Manhattan Borough President Scott Stringer’s support of the 2009 decision to overturn term limits as a way to question his judgment, in a fiery encore to their heated first debate.

“The reason why we had a third term is that the political establishment, with Scott’s support and participation, gave the mayor a third term,” said Spitzer, who criticized the independent mayor’s recent handling of issues including community policing and zoning laws.

The Jewish Community Council of Greater Coney Island is holding a candidates’ forum Thursday for four men running to replace term-limited Councilman Dominic Recchia. Hurricane Sandy’s devastation will be a prominent topic at the forum, which will be attended by frontrunner Mark Treyger, along with Todd Dobrin, John Lisyanskiy and Connis Mobley. The forum will be at 10:30 a.m. at West 37th Street and Surf Avenue.

Former Sen. Joe Lieberman knocked down the rumor before it could even spread.

“I’ve had a disconcerting number of people ask me if I would run for mayor of New York,” the former Connecticut Democrat told the Connecticut Post during an interview in his midtown Manhattan office. “My answer is, no.”