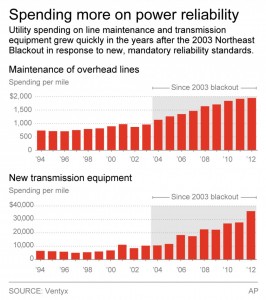 Regulators have imposed millions of dollars in civil penalties against energy companies that risk the dependability of the U.S. electrical grid since new rules following the 2003 Northeast blackout made such fines possible, including a record $25 million fine for a power failure in Florida.

The 2008 Florida blackout was small in comparison with the Aug. 14 event 10 years ago that swept eight states and parts of Canada. The big blackout interrupted phone service, cut lights and air conditioning, impeded power plants, hospitals and prisons, and disrupted transportation from Michigan to New England.

Akron-based FirstEnergy Corp. wasn’t penalized for its role in the event, which cascaded from the outage of transmission lines in Ohio.

“There were no mandatory standards, so there would have been nothing to fine them for,” said Craig Cano, a spokesman for the Federal Energy Regulatory Commission.

The nonprofit North American Electric Reliability Corp. has been transformed from a voluntary industry group to a government-sanctioned overseer of new reliability requirements developed in the wake of the 2003 blackout. Its recommended penalties are brought before the federal regulatory commission for approval.

Under the Energy Policy Act of 2005, the commission was given statutory authority over grid reliability and the hammer of potential civil penalties, fines that cannot be passed on to customers. The new law increased the regulatory commission’s civil penalty authority from $11,000 a day to $1 million a day.

In 2010, Florida Power & Light was fined $25 million for the outage in that state, which left as many as 3 million people without power for part of a day in 2008, the largest single fine to date for reliability violations. The culprit was a short circuit at a Miami-area substation.

An Associated Press review of the regulatory commission’s annual reports and online penalty database found reliability-related penalties imposed under the new standards totaled more than $33 million since oversight began in 2007. All were levied since 2010.

Besides fines, companies have been required to fix violations of the reliability standards, which touch on dozens of issues ranging from cybersecurity and power load to equipment storage and proper documentation.

“I don’t think I’d want to characterize it as ‘the industry’s become more responsible,’ because the industry has always taken seriously its responsibility associated with reliability,” said Joe Gardner, a vice president for the Midcontinent Independent System Operator. “I do think that we’ve been able to evolve our processes and systems over the last 10 years in a manner that has enhanced reliability.”

Requiring and revising standards, and creating a documented enforcement process that allows utilities and operators to learn from one another’s mistakes, is an effective way to help improve the reliability of the grid, said Jim Fama, vice president of energy delivery for Edison Electric Institute, an association of shareholder-owned power companies.

“All of that helps to strengthen the system,” Fama said.

Some within the industry have felt regulations have gone too far, said Ashley Brown, executive director of the Harvard Electricity Policy Group, which analyzes power industry policy issues.

“There’s some controversy about it because the rules are incredibly detailed — things like having the FBI’s phone number posted on your wall,” he said. “There are some who feel that’s problematic, because it acts as a disincentive.”

Perhaps for that reason, revisions are common.

Last year, the federal regulatory commission agreed to a new monitoring approach at the Reliability Corp. — dubbed “find, fix, track and report” — for violations of reliability standards that are considered relatively low-risk, such as paperwork errors. The idea was to allow the nonprofit to target the biggest risks and the most egregious violations.

Some credit the stricter national standards and more extensive operator training with helping to prevent grid-wide outages during Superstorm Sandy, which knocked out power to millions along the East Coast and blacked out parts of New York City in October 2012 when seawater poured into low-lying substations.

“Something like what happened in 2003 was a combination of human events and system failures — monitoring failures,” Gonzalez said. “And there’s been a lot of regulation to mitigate the impacts of something like computer system failures and other operating system improvements.”

This article appeared in print on page 8 of the August 14th, 2013 edition of Hamodia.