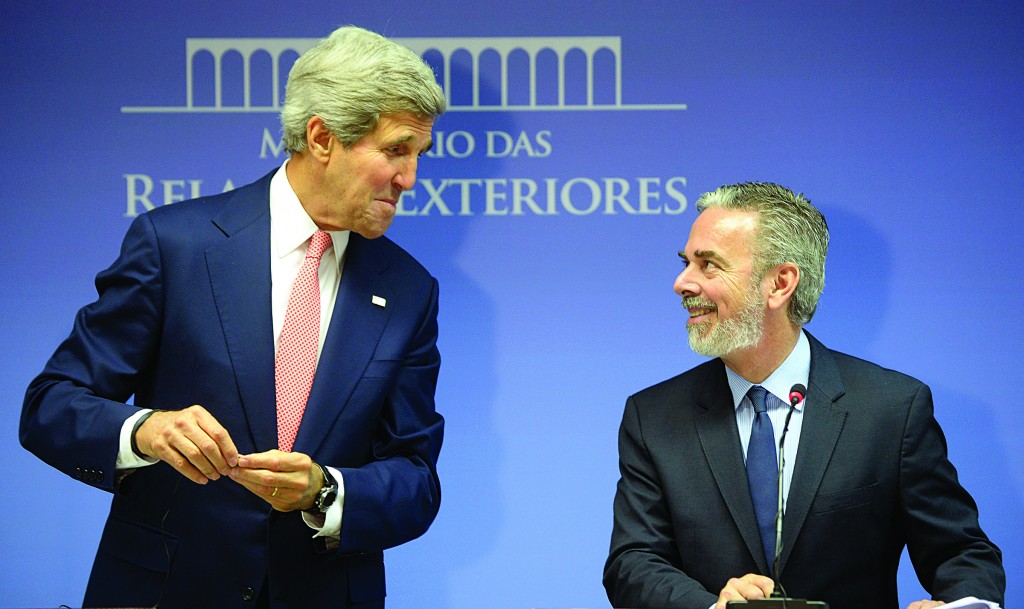 Brazil demanded answers Tuesday from the U.S. about National Security Agency spying in the country and warned that trust between the two nations would be damaged if U.S. explanations about the program were not satisfactory.

Secretary of State John Kerry, who was visiting Brasilia, sought to allay Brazil’s concerns about the program, saying the U.S. would work to provide answers to Brazil and other Latin American nations rankled by the NSA surveillance revealed by systems analyst Edward Snowden.

“We’re now facing a new type of challenge in our bilateral relationship,” Brazil Foreign Minister Antonio Patriota said at a news conference. “The challenge is related to news about the interception of Brazilian electronic and telephone communications. And if those challenges are not resolved in a satisfactory way, we run the risk of casting a shadow of distrust over our work.”

He said Brazil was seeking explanations through political, diplomatic and technical channels, but that those clarifications were not an “end to themselves.”

“We need to stop practices that violate sovereignty, ‘’ he said.

Public opposition to the spying was on display outside the Foreign Ministry building on Tuesday as a few dozen protesters yelled “go away, spies” to some members of Kerry’s traveling party as they left the building.

Kerry defended the NSA program, saying it had been approved by all three branches of the U.S. government.

“We’re not surprised and we’re not upset that Brazil would ask questions. Absolutely understandable,” Kerry said.

“Brazil is owed answers with respect to those questions and they will get them. And we will work together very positively to make certain that this question — these issues — do not get in the way of all the other things that we talked about,” Kerry said.

He said he could not discuss operational issues, but said the U.S. is talking to the Brazilians about the program.

Revelations about NSA snooping in Brazil came at a time when the U.S. has been trying to expand the relationship with Brazil, an economic powerhouse in Latin America.

During Obama’s visit to Brazil in 2011, the two nations signed ten agreements. Five more were signed when Brazil President Dilma Rousseff visited the U.S. earlier this year. Rousseff, who met with Kerry on Tuesday, has been invited to Washington in October, when Obama hosts a state visit for Brazil.

Both Patriota and Kerry boasted that the U.S.-Brazil relationship had matured and the two nations were working together on many issues. Kerry said the U.S. respected that Brazil is one of the world’s largest free-market democracies. Brazil’s foreign minister on Tuesday said that U.S. investment in the country had surpassed $100 billion and that tens of millions of dollars flow in annually. Brazil is attractive to American investors.

In February, Warren Buffett’s Berkshire Hathaway and the Brazilian firm 3G announced they agreed to buy ketchup-maker H.J. Heinz. Brazil’s 3G, owned by Jorge Lemann, one of Brazil’s richest men, is best known for its acquisition of Burger King and its role in the deal that created Anheuser-Busch InBev, the world’s biggest beer maker.

Kerry began his one-day visit with a stop at Brazil’s Scientific Mobility Program, which aims to train 101,000 Brazilian students overseas and have them return home to make use of their acquired knowledge in science and technology. Rousseff plans to have 47,000 of those students trained in the United States. This dovetails with Obama’s 100,000 Strong Initiative to bring 100,000 Latin American students to the United States and send the same number of U.S. students to that region.