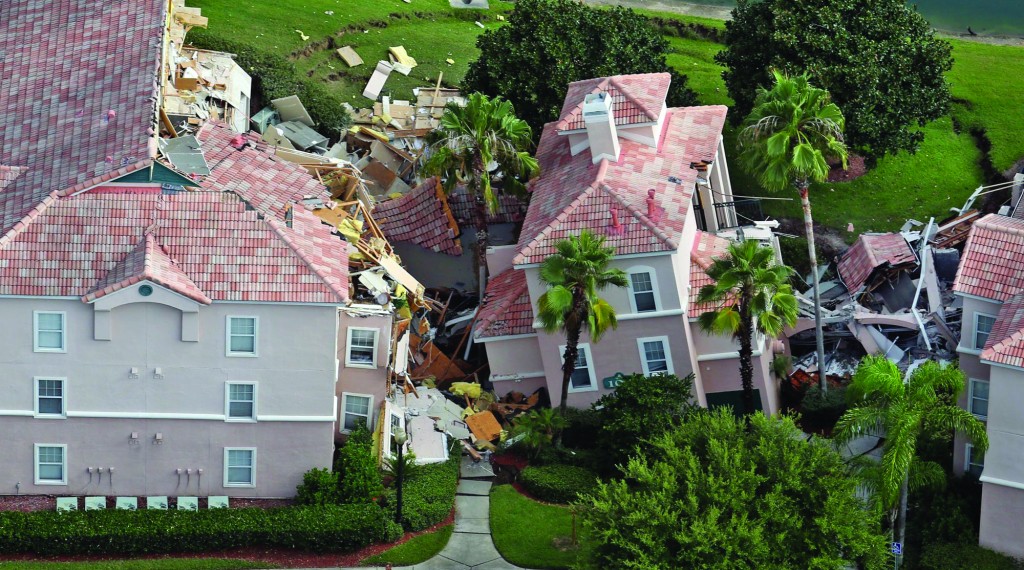 First came the cracking sounds. Then windows started blowing out. And before they knew it, guests felt the ground beneath their Lake County resort near Disney World sink into the ground.

Guests had only 10 to 15 minutes to escape the collapsing buildings at the Summer Bay Resort on U.S. Highway 192 in the Four Corners area, located about 7 miles east of Walt Disney World resort, where a large sinkhole — about 60 feet in diameter and 15 feet deep — opened in the earth late Sunday.

No one was injured, but about three dozen resort-goers left behind car keys, medications and other personal belongings inside their luxury condominiums after the crumbling edifices were evacuated.

“My heart sunk. I was sick to my stomach,” said resort president Paul Caldwell after getting a call about 10:30 p.m. from his staff that the 15-year-old buildings full of guests were sinking into the ground.

“No doubt there would’ve been injuries if they hadn’t gotten the building evacuated,” he said during a live news conference. He said after the windows began to shatter, a guest ran into the street to flag down resort personnel.

Firefighters arriving on scene immediately went door-to-door of building 104, a three-story building of garden-style apartments, to help guests escape from the splintering and cracked building frame.

The building was sheared nearly in half.

About 20 individuals — men, women and children — left behind everything they had brought to their vacation rental. The American Red Cross is on scene to assist the displaced guests.

Firefighters are awaiting engineers to assess the damage the gaping hole caused.

The cavities form as soft limestone below Florida’s surface dissolves and collapses with acidic rainwater that filters through the soil. Construction, groundwater pumping and drought followed by heavy rain can accelerate the erosion process.

The water dissolves limestone, causing sands to migrate through and form a hole on the surface —like the neck of an hourglass.

Experts in Lake County recently told the Orlando Sentinel the region could expect more collapsing earth as companies that repair sinkholes are seeing an increase in complaints.