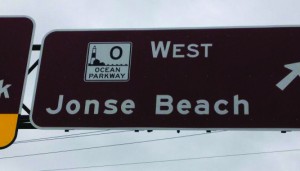 The misspelling of Jones Beach on a new sign on Long Island’s Robert Moses Parkway is making the rounds on social media.

Jeena Belil of Brookhaven, who saw the misspelled sign, told Newsday she was shocked no one proofread the sign.

The state Department of Transportation said the mistake will be corrected with an adhesive overlay in the next few days. It said that employees are supposed to inspect signs before they go up.

This article appeared in print on page 5 of the August 12th, 2013 edition of Hamodia.