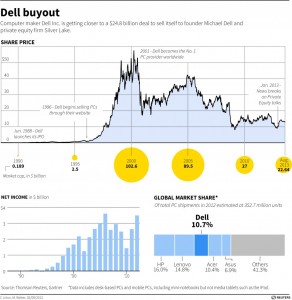 Michael Dell appeared to take a key step Friday toward completing his bid to buy the computer company he founded, as a new and richer takeover deal between him and the company’s board was unveiled.

The news of the new agreement sent Dell Inc.’s stock price upward in heavy market trading. The stock closed at $13.68 a share, up 5.6 percent.

Michael Dell and his financial ally, Silver Lake Partners, negotiated the new deal Thursday night with the special committee to the Dell Inc. board of directors that is controlling the buyout process.

The deal cements the offer price at $13.75 a share, and adds a special dividend of 13 cents. It also guarantees that the company’s regular third-quarter dividend of 8 cents will be paid. Both dividends are expected to be paid for with company funds.

In return, the Dell Inc. committee agreed to change the voting rules for the deal, saying it will not count shares of abstaining shareholders as “no” votes. It also reset the “record date,” which is a cutoff point beyond which new investors can’t have a vote on the buyout. The old date was June 3; the new date is Aug. 13, which will enable many more-recent investors to vote on the $24 billion-plus deal.

With the change in voting rules, analyst Roger Kay with Endpoint Technologies Associates said he believes Michael Dell will get the majority he needs to approve the deal.

“My sense is they have got those votes as long as the abstainers aren’t going to count against them,” Kay said. “They can do the deal. They have gotten, pretty much, a ‘yea’ from everyone who matters.”

Billionaire investor Carl Icahn, who has been fighting the Michael Dell-led takeover bid, responded to the agreement by saying he will press on with his lawsuit against Dell Inc. and individual directors, which was filed Thursday in Delaware.

“The war regarding Dell is far from over,” Icahn said in a written statement. “We believe this lawsuit has now become of paramount importance.”

The lawsuit asks the court to prohibit the company from making some of the changes in the approval process that it has just made. And it asks the court for damages from any losses Icahn suffers as a result of those changes. The suit was filed in Delaware because, like many other Fortune 500 companies, Dell Inc. is incorporated in Delaware due to that state’s corporation-friendly laws.

“The special committee has simply agreed to a modest distribution of company cash… cash that could continue to be owned by stockholders if Dell were to remain a public company,” it said in a statement. “We think that paying stockholders with their own money is financial engineering, not new value.”

“This increases the chance of a successful vote,” said Ashok Kumar with Maxim Group. “This was the best possible outcome at this point.”

“This will get the deal done,” said analyst Brian Marshall with ISI Group. “Take it and run.”

Kumar doesn’t believe the Delaware court will stop the buyout.

“The lawsuit will be more of a sideshow,” he said. “If the buyout deal gets a majority of shareholders, the rest is just noise.”

Friday’s announcement was the latest step in an almost-soap-operatic sequence of events involving the buyout since Icahn became actively involved in trying to block the deal in March.

Friday marked the third time that the special shareholders’ meeting was adjourned because of new developments. And the announcement came only two days after the special committee rejected Michael Dell’s call for a change in voting rules as part of what he had described as “our final and best offer.”

Analysts said Thursday that Michael Dell might have allowed an opening for Icahn to block the buyout in his attempt to be fair with shareholders.

The twists and turns of the deal have impressed even the experts.

“If you have to go through these machinations to get these things through, it frankly is an excellent demonstration of why management buyouts are so problematic,” Charles Elson, director of the John L. Weinberg Center for Corporate Governance at the University of Delaware, said in an interview with Reuters.

Shareholders who attended Friday’s meeting had differing feelings about the new agreement.

“The revised offer is more pleasing than the initial offer,” said Austin resident Jim Ruddy. “I am happier than I was, but I am not as happy as I would have been if I had sold in March of 2000,” when the stock was near its peak.

Shareholder Janet Kres, also of Austin, said she is happy with the increased offer. “Some people, it’ll be a benefit to them. Other people bought higher, and it’ll be a loss,” she said. “That’s the name of the game: stocks go up, stocks go down.”

But Elgin, Texas resident Vince Dungan, a retired state employee, is anything but happy.

“To me, it’s no good at all,” he said. “It’s not near enough. The company’s worth a lot more than what they’re trying to pay for it.”

Dungan bought his Dell stock in 1998 at an average cost of $32.50 a share, and said he could lose as much as $160,000 from his original investment if the current offer goes through.

He acknowledged that Dell Inc. might need to make changes in its business.

“But what about the stockholders that have been investing in this company all these years?” he said. “We’re losing money, lots of money.”