Blue-collar workers poured into the cavernous auto plants of Detroit for generations, confident that a sturdy back and strong work ethic would earn them a house, a car and economic security. It was a place where the American dream came true.

It came true in cities across the industrial heartland, from Chicago’s meatpacking plants to the fire-belching steel mills of Cleveland and Pittsburgh. It came true for decades as manufacturing brought prosperity to big cities in states around the Great Lakes and those who called them home.

Detroit was the affluent capital, a city with its own emblematic musical sound and a storied union movement that drew Democratic presidential candidates to Cadillac Square every four years to kick off campaigns at Labor Day rallies.

The good times would not last forever. As the nation’s economy began to shift away from the business of making things, that line of work met the force of foreign competition. Assembly-line jobs that paid well dried up as factories that made the cars and supplied the steel closed their doors. The survivors of the decline, especially whites, fled the cities to pursue new dreams in the suburbs.

The “Arsenal of Democracy” that supplied the Allied victory of World War II and evolved into the “Motor City” fell into a six-decade downward spiral of job losses, shrinking population and a plummeting tax base. Detroit’s singular reliance on an auto industry that stumbled badly and its long history of racial strife proved a disastrous combination.

“Detroit is an extreme case of problems that have afflicted every major old industrial city in the U.S.,” said Thomas Sugrue, author of The Origins of the Urban Crisis: Race and Inequality in Postwar Detroit and a history professor at the University of Pennsylvania.

All of the nation’s industrial cities fell, but only Detroit hit bottom. Staggering under as much as $20 billion in unpaid bills, Detroit surrendered Thursday, filing the single largest municipal bankruptcy in American history. 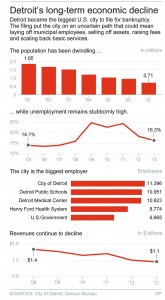 Detroit’s first wave of prosperity came after World War I and lasted into the early 1920s, driven by the rise of the auto industry. “It was home to the most innovative, cutting-edge dominant industry in the world,” said Boyle. “The money there … was just staggering.”

More affluence followed in the late 1940s and early 1950s as the auto industry boomed. Tens of thousands of blacks migrated from the South seeking jobs on the assembly line and a foothold in the middle class. In 1950, Detroit’s population peaked as a metropolis of more than 1.8 million, making it the nation’s fifth-largest city. The transformation was dramatic.

“You’ve got a vast city of working people who no longer have insecure lives, people with high-school … degrees who can earn enough to buy a house, a car, a boat,” Boyle said.

But by that time, Detroit’s decline had already begun.

The auto industry had started to expand beyond the city and was building plants in suburban and rural areas, and eventually sought refuge from the city’s powerful unions in the Sunbelt states and even overseas. Between 1947 and 1963, Detroit lost 140,000 manufacturing jobs, said Sugrue, the Pennsylvania professor.

A decade later, as Japanese auto imports started gobbling more of the U.S. market, the loss of jobs continued. Membership in the United Auto Workers topped out at 1.5 million in 1978 and is now about 400,000, said Mike Smith, the union’s archivist at Wayne State University’s Walter Reuther Library.

“In a way, it’s not unlike a small town that has a textile factory for 50 years; then all of a sudden it closes up and the whole town is decimated,” Smith said.

It wasn’t an uncommon plight. The cities that rose alongside Detroit came to be known as the Rust Belt.

Like Detroit, Pittsburgh was a community defined by its dependence on a single industry. But as steelmaking crumbled under pressure from foreign imports and the decline of the U.S. auto industry, the city’s population dropped by more than 40 percent between 1970 and 2006.

But during those years, Pittsburgh forged a new identity around health care and technology. It retrained former steelworkers, invested in higher education, and launched a controversial campaign to redevelop more than 1,000 acres of industrial brownfields, replacing decaying lots with luxury buildings, and 27 miles of riverfront parks.

Detroit’s unraveling can’t be blamed solely on the city’s reliance on one industry that buckled. Some point to the city’s political leadership and its reluctance over the years to make tough decisions.

“I think [the fiscal disaster] was inevitable because the politicians in Detroit were always knocking the can forward, not confronting the issues, buying off public employees by increasing their pensions,” said Daniel Okrent, a Detroit native who wrote a Time Magazine cover story on the city in 2009.

Racial strife also infected the city. Sugrue said some of the tensions surfaced long before the city’s infamous 1967 riots. Two decades earlier there were more than 200 racial incidents of whites attacking blacks in Detroit, almost all stemming from the first or second black families moving into an all-white neighborhood.

The migration of blacks into Detroit, which helped power its economic rise, was followed by an exodus of white residents for the suburbs. In the last decade alone, from 2000 to 2010, Detroit lost about a quarter-million residents. The city’s current population of roughly 700,000 is about 83 percent black.

What’s left is a Detroit defined by a barren landscape of deserted neighborhoods and abandoned buildings that overwhelms the very recent rebound in parts of downtown. The consequences of that population loss and segregation extend beyond the declining property values and erosion of the city’s tax base. The result is an isolated city.