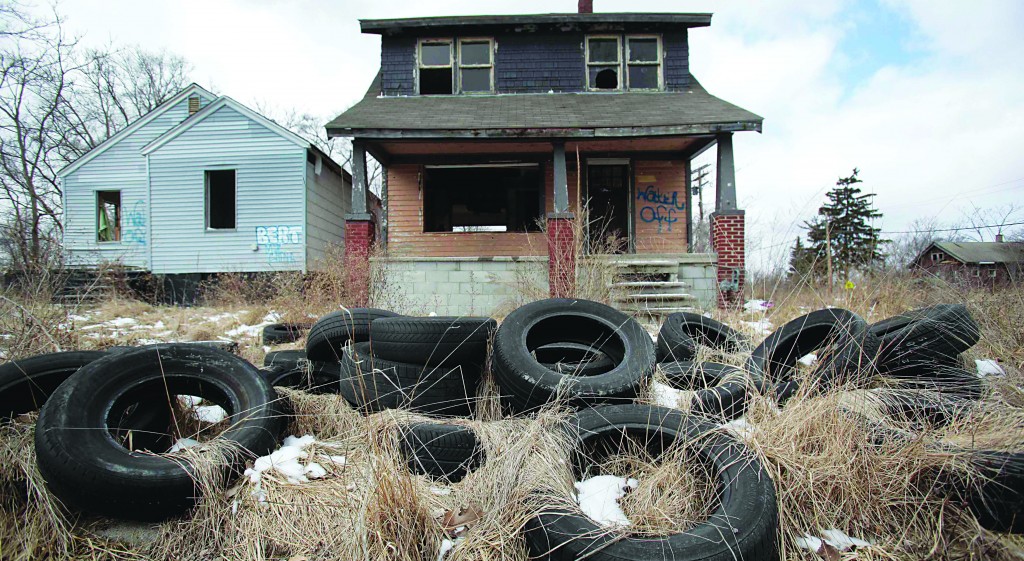 Once the very symbol of American industrial might, Detroit became the biggest U.S. city to file for bankruptcy Thursday, its finances ravaged and its neighborhoods hollowed out by a long, slow decline in population and auto manufacturing.

The filing, which had been feared for months, put the city on an uncertain path that could mean laying off municipal employees, selling off assets, raising fees and scaling back basic services such as trash collection and snow plowing, which have already been slashed.

“Only one feasible path offers a way out,” Gov. Rick Snyder said in a letter approving the move.

Kevin Orr, a bankruptcy expert hired by the state in March to stop Detroit’s fiscal free fall made the Chapter 9 filing Thursday in federal bankruptcy court.

Detroit lost a quarter-million residents between 2000 and 2010.

A population that reached 1.8 million in the 1950s now struggles to stay above 700,000. Much of the middle class and scores of businesses have also fled Detroit, taking their tax dollars with them.

In recent months, the city has relied on state-backed bond money to meet payroll for its 10,000 employees.

Orr was unable to convince a host of creditors, unions and pension boards to take pennies on the dollar to help facilitate the city’s massive financial restructuring. If the bankruptcy filing is approved, city assets could be liquidated to satisfy demands for payment.

Snyder determined earlier this year that Detroit was in a financial emergency. He made it the largest U.S. city to fall under state oversight when a state loan board hired Orr. His letter was attached to Orr’s bankruptcy filing.

“The citizens of Detroit need and deserve a clear road out of the cycle of ever-decreasing services,” Snyder wrote. “The city’s creditors, as well as its many dedicated public servants, deserve to know what promises the city can and will keep. The only way to do those things is to radically restructure the city and allow it to reinvent itself without the burden of impossible obligations.”

A turnaround specialist, Orr represented automaker Chrysler LLC during its successful restructuring. He issued a warning early on in his 18-month tenure in Detroit that bankruptcy was a road Detroit and its creditors preferred to avoid.

He laid out his plans in June meetings with debt holders, in which his team warned there was a 50-50 chance of a bankruptcy filing. Some creditors were asked to take about 10 cents on the dollar of what the city owed them. Underfunded pension claims would have received less than 10 cents on the dollar under that plan.

Orr’s team of financial experts said that proposal was Detroit’s one shot to fix its fiscal problems permanently. The team said Detroit was defaulting on about $2.5 billion in unsecured debt to “conserve cash” for police, fire and other services.

“Despite Mr. Orr’s best efforts, he has been unable to reach a restructuring plan with the city’s creditors,” the governor wrote. “I therefore agree that the only feasible path to a stable and solid Detroit is to file for bankruptcy protection.”

Detroit’s budget deficit is believed to be more than $380 million. Orr has said long-term debt was more than $14 billion and could be between $17 billion and $20 billion.

Orr’s decision to file now may have been influenced by lawsuits filed by some city workers and retirement systems to prevent Snyder from approving a bankruptcy request from the emergency manager, said Detroit-area turnaround specialist James McTevia.

They have argued that bankruptcy could change pension and retiree benefits, which are guaranteed under state law.

A bankruptcy judge will rule on all the litigation, McTevia said. “One court will adjudicate all these,” he said.

Some are concerned that a bankrupt Detroit will cause businesses large and small to reconsider their operations in the city. But General Motors, which filed and emerged from a Chapter 11 bankruptcy, does not anticipate any impact on its daily operations, the automaker said Thursday in a statement.

“GM is proud to call Detroit home, and today’s bankruptcy declaration is a day that we and others hoped would not come,” the statement said. “We believe, however, that today also can mark a clean start for the city.”