With the clock ticking, Egypt’s besieged president said Tuesday that he will not step down as state media reported that the powerful military plans to overturn his Islamist-dominated government if the elected leader doesn’t meet the demands of the millions of protesters calling for his ouster.

Mohammed Morsi’s defiant statement sets up a major confrontation between supporters of the president and Egyptians angry over what they see as his efforts to impose control by his Muslim Brotherhood as well as his failure to introduce reforms more than two years after the revolution that ousted his autocratic predecessor, Hosni Mubarak.

Writing Tuesday on his official online account, Morsi said he “asserts his adherence to constitutional legitimacy and rejects any attempt to breach it and calls on the armed forces to withdraw their ultimatum and rejects any domestic or foreign dictates.”

The leaking of the military’s so-called political road map appeared aimed at adding pressure on Morsi by showing the public and the international community that the military has a plan that does not involve a coup.

With tensions high, at least seven people were killed in three separate clashes between Morsi’s supporters and opponents in Cairo, according to hospital and security officials, who spoke on condition of anonymity because they were not authorized to speak to the media. The officials did not give more details. The violence raised the overall death toll to 23 since Sunday when a mass protest was held to mark the anniversary of Morsi’s inauguration. 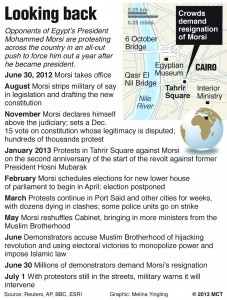 Protesters on Tuesday turned to a new target, massing a giant crowd outside Cairo’s Qasr el-Qobba presidential palace where Morsi has been working in recent days — though he was not believed to be inside — in addition to filling wide avenues outside another palace, central Tahrir Square and main squares in cities nationwide.

Morsi’s supporters also increased their presence in the streets, after his Muslim Brotherhood and hard-line Islamist leaders called them out to defend what they say is the legitimacy of the country’s first freely elected president. Tens of thousands held marches in Cairo and other cities.

With the clock ticking on the military’s ultimatum, many in the anti-Morsi and pro-Morsi camps were vowing to fight to the end.

The president’s Islamist backers have stepped up warnings that it will take bloodshed to dislodge him, saying they would rather die fighting a military takeover than accept Morsi’s ouster just a year after the country’s first free election.

“Seeking martyrdom to prevent the ongoing coup is what we can offer as a sign of gratitude to previous martyrs who died in the revolution,” Brotherhood stalwart Mohammed el-Beltagy wrote Tuesday in an online post.

Fearing an implosion that could throw Egypt into chaos, U.S. officials said Washington has suggested to Morsi that he call early elections, though they underlined they were not demanding specific steps — and they said they had stressed to Egypt’s military that a coup would have consequences for U.S. aid.

Morsi adviser Ayman Ali denied that Washington asked the president to call for early presidential elections and said consultations were continuing in an effort to reach national conciliation and resolve the current political crisis. He did not elaborate.

Morsi met with the army’s chief, Defense Minister Gen. Abdel-Fattah el-Sissi, and Prime Minister Hesham Kandil in the second such meeting in as many days, Ali said, without giving details.

The army has insisted it has no intention to take power. But the reported army road map showed it was ready to replace Morsi and make a sweeping change in the ramshackle political structure that has evolved since Mubarak’s fall in February 2011.

The constitution and domination of the legislature after elections held in late 2011-early 2012 are two of the Islamists’ and Brotherhood’s most valued victories — along with Morsi’s election last year.

A retired army general with close ties to the military confirmed the news agency report’s version of the road map.

Hossam Sweilam said a panel of experts would draft a new constitution and the interim administration would be a presidential council led by the Supreme Constitutional Court’s chief justice and including the defense minister, representatives of political parties, youth groups, Al-Azhar Mosque and the Coptic Church.

He said the military envisaged a one-year transitional period before presidential elections are held.

The military spokesman, Col. Ahmed Mohammed Ali, declined to confirm the details. “It is too early and we don’t want to jump … to conclusions,” he said.

At least one anti-Morsi media station put up a clock counting down to the end of the military’s ultimatum, putting it at 4 p.m. Wednesday (1400 GMT), though a countdown clock posted online by Morsi opponents put the deadline at 5 p.m. (1500 GMT). The military did not give a precise hour.

Three government spokesmen — two for Morsi and one for the prime minister — were the latest to quit as part of high-level defections that underscored his increasing isolation and fallout from the military’s ultimatum. Five Cabinet ministers, including the foreign minister, resigned Monday, and a sixth, Sports Minister El-Amry Farouq, quit Tuesday.

One ultraconservative Salafi party, al-Nour, also announced its backing for early elections. The party was once an ally of Morsi but in recent months has broken with him.

Among the opposition crowds outside Qasr el-Qobba, one protester said he believes Morsi will not go easily. “He will only leave after a catastrophe. Lots of blood. And the military is the only party that can force him out then,” said Haitham Farouk, an oil company employee joining a protest for the first time.

He said the “epic” crowds showed how Egypt’s public has turned against Morsi and his Brotherhood, which opponents claim is the real power behind the president.

“This is everybody, not just the educated or the political,” Farouk said of the protesters. “They came down because only the Brotherhood gained in the past two years.

“Morsi may try half-measure to satisfy the army,” he said, “but the people are not going back until he leaves. After what we have seen in the past year, we will not settle for less.”

In a significant move, opposition parties and the youth movement behind the demonstrations agreed that reform leader and Nobel Peace laureate Mohamed El-Baradei would represent them in any negotiations on the country’s political future.

The move appeared aimed at presenting a unified voice in a post-Morsi system, given the widespread criticism that the opposition has been too fragmented to present an alternative to the Islamists.

Brotherhood spokesman Gehad el-Haddad said the opposition is to blame for its own woes, failing to perform well in the elections, and has now decided to “brush up to military power.”

“We can’t keep running elections until [the Brotherhood] loses,” he wrote in a Tweet.

He said the opposition should “man up” to its responsibilities and come up with a better strategy “or accept democratic outcomes.”

Despite heated rhetoric among many Islamists about standing up to the military, one cleric from the Salafi movement warned against repeating the scenario of Algeria, when the military negated elections that Islamists won in the 1990s, and the Islamists responded with a yearslong, bloody insurgency.

The result, Adel Nasr wrote on a Salafi website, was that “more than a hundred thousand were killed and … their popularity went down,” costing Islamists both political power and the power of their religious message.