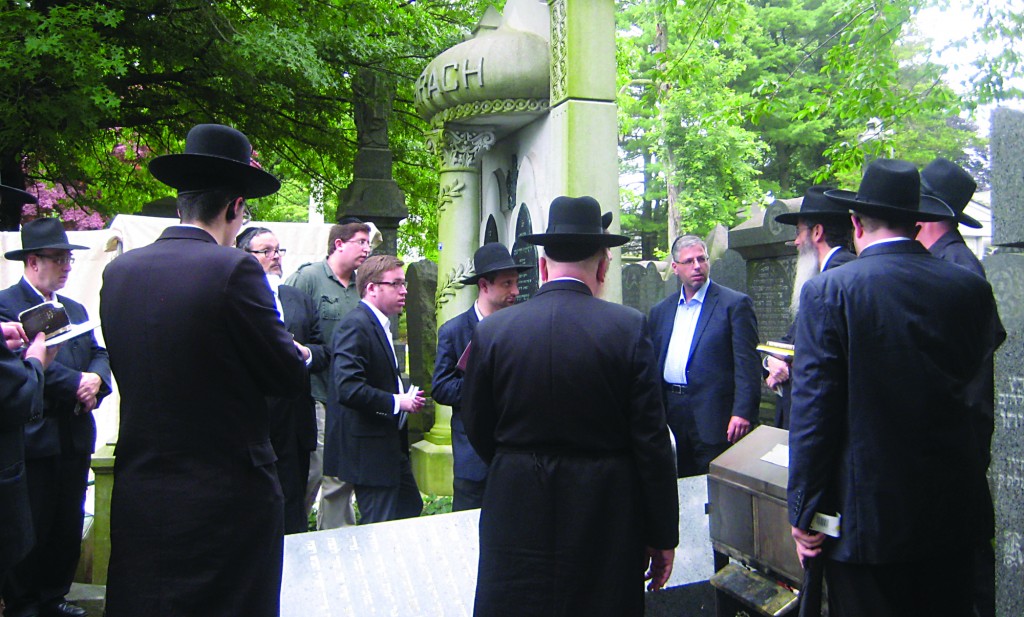 On Tuesday, 24 Tammuz/July 2, hundreds of Yidden converged on Union Field Cemetery in the Ridgewood section of Queens to visit the kever of Harav Yaakov Joseph, zt”l, Rav Hakollel of New York City, marking his 111th yahrtzeit.

Harav Joseph, a talmid of the Netziv at Yeshivas Volozhin and of Harav Yisrael Salanter, zt”l, served as Dayan in Vilna prior to being invited by the kehillos in New York City to serve as the city’s first Chief Rabbi. He arrived here in the summer of 5648/1888 and was greeted with great honor. His first drashah at Beth Medrash Hagadol in the Lower East Side on Shabbos Nachamu drew an overflow crowd and received positive coverage in the press.

Soon after his arrival, Harav Joseph began working to strengthen Yiddishkeit in areas such as kashrus, shechitah and chinuch. He set in motion systems to improve the existing standards and became intimately involved with yeshivah students, overseeing their growth, as well as with immigrant talmidei chachamim, testing them for semichah and assisting them in finding positions.

In the beginning, the Jewish community enthusiastically supported him. Unfortunately, corrupt, anti-religious elements began to work to thwart his altruistic efforts, especially his rectifications in kashrus.

Opposition came from another front as well. The community was comprised of Yidden from various lands, and many of the immigrants, instead of focusing on Harav Joseph’s accomplishments, chose to dwell on technicalities and resented the choice of a Lithuanian Chief Rabbi. This led to other individuals being recognized by some groups as Chief Rabbi, thereby making a mockery of the position.

Harav Joseph responded to the situation in a dignified manner. He would not allow his supporters to vilify his opponents in turn, and refused to label the hashgachah of the oppositionist rabbis as treife, out of consideration for their parnassah.

Unfortunately, the situation continued to deteriorate. Eventually, the Rav was left without a source of income and his health was impacted, causing him to become bedridden for the rest of his life. He was niftar on 24 Tammuz 5662/1902, at the relatively young age of 62. Tens of thousands attended his levayah.

Sadly, even his levayah was a scene of unrest, as anti-Jewish rioters attacked the procession making its way through the city streets. The Rav Hakollel was ultimately laid to rest at Union Field Cemetery in Queens.

Rabbi Yonah Landau, founder and menahel of Vaad Henesia Lekivrei Tzaddikim B’Artzos Habris, has been the major force behind the visits Yidden have been making to the kever in recent years. He reports that many people have attested to having experienced yeshuos after davening there.

Rabbi Landau was on hand at the cemetery yesterday with Vaad members, to provide refreshments and assist visitors. In honor of the yahrtzeit, hundreds from all sectors of the community, both men and women, converged on the cemetery throughout the day to daven at the tziyun. Groups arrived representing various kehillos in the New York area, including one from Khal Bnai Yitzchok in Flatbush, led by Harav Dovid Goldwasser, who shared divrei Torah from Harav Joseph’s sefer L’Beis Yaakov.

He related the story of Nachum Ish Gamzu, in maseches Taanis, who prayed to become incapacitated because he delayed in providing sustenance to a poor man. Yet, despite this error, because he was a tzaddik gamur, when the dilapidated house Nachum was in was ready to collapse, he directed his talmidim to remove the items in the house and only afterwards his bed, relying on his merit that the building would not fall until he had left. The Maharsha asks why he did so, since there is a principle that we don’t rely on miracles. Harav Joseph explained that Nachum Ish Gamzu wished to illustrate the great zechus of tzedakah. Although his tzidkus had sufficed to prevent the house from collapse, his delay as regards the mitzvah of tzedakah and no other sin had brought him to his physical state.

Tehillim were recited individually as well as b’tzibbur on behalf of Klal Yisrael, taking into account the many individual and communal needs facing Yidden today. The cemetery hours were graciously extended to accommodate those visiting Harav Joseph’s kever.

Individuals and groups visit Harav Joseph’s kever on the yahrtzeit as well as throughout the year.