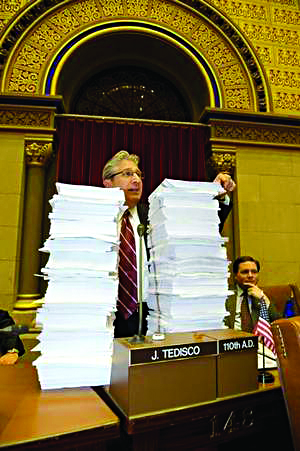 New York’s Legislature, which has been criticized at times for hidebound plodding, is about to leap into the ’90s. After years of debate, it is on the cusp of going digital.

Lawmakers quietly approved a bill last week to go paperless. It will save the state the $13 million-a-year cost of printing bills that can be a couple feet thick for each of 213 legislators and members of their staff, most of whom won’t read a word of the vast majority of measures before the reams are dumped, still bundled in twine, into recycling bins.

Hauling away the paper for recycling costs New York taxpayers as much as another $40 million a year, said Assemblyman James Tedisco. He’s the longtime sponsor of the measure who persisted despite years of laughs and ridicule as dozens of patronage jobs were protected.

“It’s common sense, and embarrassment,” the Republican said of his long fight. “If you don’t do something about a problem like this, you look kind of funky.”

But not so fast. Voters will have to approve the dull-edged measure in a referendum to change the 200-year old constitution. And not until next year.

For years, Tedisco piled columns of papers three feet thick on his Assembly desk to make his point, arguing as only his eyes appeared above the pile. When handcarts loaded with papers rumbled down the Capitol halls, he’d snap a photo and post it on his personal web page. He regularly harangued reporters to do stories.

“We could have been the No. 1 destroyer of … Earth’s forests,” said Tedisco.

State legislatures have been experimenting with putting documents online for lawmakers and the public, according to the National Conference of State Legislatures. The trend has increased in hard fiscal times where states are faced with millions of dollars in costs for printing, hauling and recycling the mountains of paper.

A typical week of New York’s legislative session would produce enough paper to stand over six feet high, said state Sen. Carl Marcellino. In a typical six-month session, the Senate would produce up to 7,000 bills and the Assembly would produce as many as 15,000. Each would have to be printed out for 63 senators and staff and for 150 Assembly members and staff.

“We level whole forests on a weekly basis,” said Marcellino, a Long Island Republican. “And half the time when we’re sitting around here, we’re waiting for something to be printed and distributed.”

This year, the bill got a big boost when the passage of the state budget by the April 1 deadline was threatened when a printer broke down. Though there would be no sanction for tardiness, passing budgets on time has become a major accomplishment for lawmakers and governors on the campaign after New York routinely missed the deadline because of political gridlock.

Ohio cut costs substantially in 2003 when it no longer had to make 110 copies of every legislative action, at a time when the budget was more than 1,000 pages long. Digital documents in Florida sped up the legislative process and ended overnight printing of pages that were cut and pasted — using scissors and paste. Several tractor-trailers were once needed to haul away the Florida Senate’s paper after each session.

Several states including Wisconsin and Nevada have phased in paperless legislating as far back as 2000.

The federal government, which had used more than 100,000 tons of paper most years, is now a leader in going digital.

In New York, the cost of going paperless will be the charge of wiring the chamber in the 130-year-old building for Wi-Fi and purchasing computers for lawmakers.

“The Senate has traditionally been slow to change,” Marcellino said. “Hopefully we’ll get the Legislature into the 21st century.”