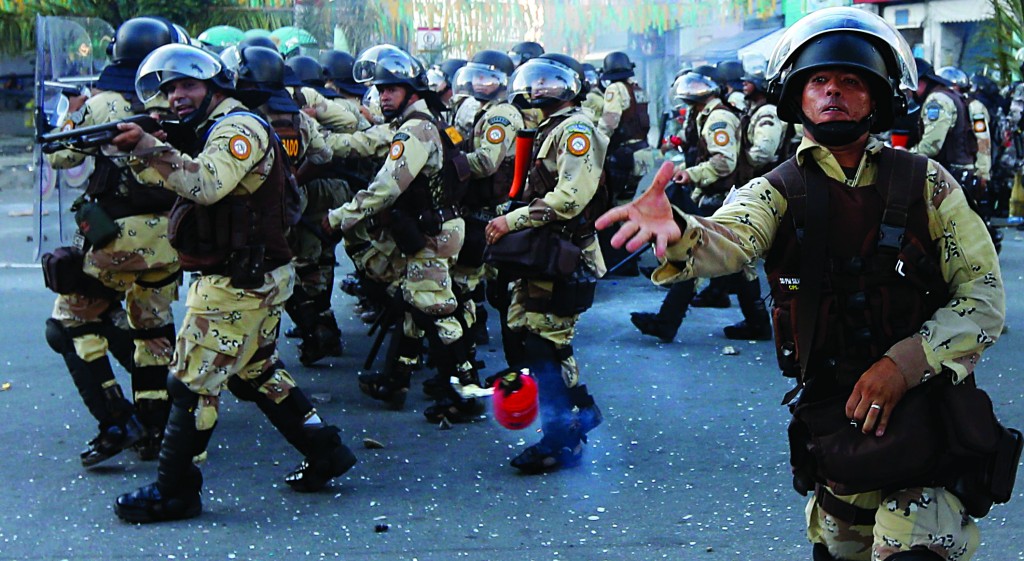 Protesters gathered for a new wave of massive demonstrations in Brazil on Thursday, extending the protests that have sent hundreds of thousands of people into the streets since last week to denounce poor public services and government corruption.

The biggest of the more than 80 demonstrations was expected in Rio de Janeiro, where thousands of protesters waving flags and carrying banners demanding quality public services blocked several streets and avenues in a peaceful demonstration.

Similar scenes were seen in Sao Paulo, Recife, Salvador and other cities where store and bank windows were boarded up in case the protests turned violent.

In the northeastern city of Salvador, police shot tear gas canisters and rubber bullets to disperse a small crowd of protesters trying to break through a police barrier blocking one of the city’s streets. One woman was injured in her foot.

Elsewhere in Salvador some 5,000 protesters gathered in Campo Grand Square.

“We pay a lot of money in taxes, for electricity, for services, and we want to know where that money is,” said Italo Santos, a 25-year old student as he walked with five friends toward the square.

Several city leaders have already accepted protester demands to revoke an increase in bus and subway fares and hope that anti-government anger cools.

In Sao Paulo, where demonstrators blocked Paulista Avenue, one of the city’s main thoroughfares, organizers said they would turn their demonstration into a party celebrating the lower transit fares. But many believe the protests are no longer just about bus fares and have become a cry for systemic changes in a country that’s otherwise seen a decade-long economic boom.

The U.S. Embassy in Brazil wasn’t taking any chances: It warned its citizens to stay away from the flurry of protests nationwide.

Many now marching in Brazil’s streets hail from the growing middle class, which government figures show has ballooned by some 40 million people over the past decade amid a commodities-driven boom.

While the complaints of protesters are wide-ranging, there have been few answers about how to turn disgruntlement into a coherent list of demands for the government.

In announcing the reversal of the fare hike, Sao Paulo Mayor Fernando Haddad said it “will represent a big sacrifice and we will have to reduce investments in other areas.” He didn’t give details on where other cuts would occur.