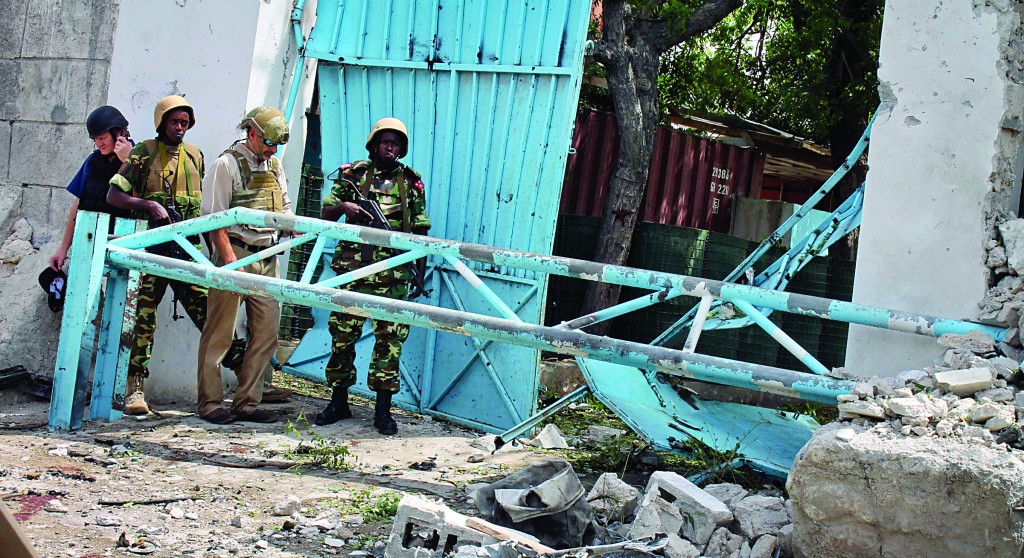 Seven al-Qaida-linked terrorists on a suicide mission attacked the U.N. compound Wednesday with a truck bomb and then poured inside, killing at least 13 people before dying in the assault.

At least three foreigners were slain during the raid in the Somali capital of Mogadishu, about 18 months after Islamic insurgents were pushed from the seaside city.

The terrorist group al-Shabab claimed responsibility for the attack, calling the U.N. “a merchant of death.”

African Union forces expelled al-Shabab from Mogadishu in August 2011, ending years of daily violence that had caused the rest of the world to shun the capital for two decades. After the ouster of al-Shabab, the international community had started trickling back in to the capital, and the U.N. began moving in its personnel from Kenya, a process that accelerated in recent weeks.

Wednesday’s attack, however, underscores the fragile security situation and will force the U.N. and embassies to review safety plans and decide if they have the resources to withstand a sustained assault from al-Shabab.

U.N. Secretary-General Ban Ki-moon expressed outrage over the attack. The U.N. Security Council later Wednesday reiterated its willingness “to take action against those whose behavior threatens the peace, stability or security of Somalia.”

Susan Rice, the United States ambassador to the U.N., condemned the “brazen assault on civilians working for peace.”

The attack began about 11:30 a.m. when the seven al-Shabab terrorists from what the group called its martyrdom brigade blew up an explosives-laden truck at the gates of the U.N. compound and gunmen rushed in, said a U.N. official who insisted on anonymity because he was not an official spokesman.

At least two other blasts followed, said Ben Parker, a spokesman for the U.N. Assistance Mission in Somalia.