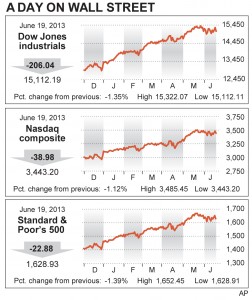 Financial markets shuddered Wednesday after the Federal Reserve said it could start scaling back its huge economic stimulus program later this year and end it by the middle of next.

The sharp reaction in markets, especially in the 10-year Treasury note, showed just how much investors have come to depend on the Fed’s easy money policies.

The yield on the 10-year Treasury rose to 2.35 percent, its highest in 15 months. The Dow Jones industrial average fell more than 200 points.

“Any whiff there’s going to be reduction in the (Fed’s) ammunition is met with selling,” said James Camp, managing director of fixed income at Eagle Asset Management.

The Fed has been buying $85 billion worth of bonds each month to keep long-term rates low, and stimulate the economy. On Wednesday, the Fed sketched a brighter outlook for the economy and Chairman Ben Bernanke said the bank’s purchases could slow.

Rates have already risen significantly since May 3, when the yield on the 10-year hit its lowest point of the year, 1.63 percent. Investors have been pushing up those rates in anticipation of the day when the central bank stops buying bonds.

If rates rise too fast, investors can get spooked.

“You want a nice, gradual rise,” said Talley Leger, a strategist at Macro Vision Research. “But when it’s furious and disorderly like today, it’s too fast. It can have a negative impact on stocks.”

A brighter outlook for the U.S. economy normally would convince people to buy stocks, not sell them. But Leger said investors have become hooked on Fed stimulus and sold.

“Markets are asking for expansion of already stimulative policies, and they’re not getting it,” he said. “It’s like a drug supplier and an addict.”

The stock market drifted lower for most of the day, ahead of a scheduled statement from the Fed and a press conference by Bernanke.

The Standard & Poor’s 500 was down about half a percentage point shortly after the Fed released its statement. Then Bernanke took questions from reporters. In response to one, he said that the Fed could scale back its bond purchases later this year, and the selling accelerated.

Bonds and stocks both slumped even though Bernanke said that the central bank would only cut back on its stimulus once the economy had improved sufficiently and was in no hurry to raise rates.

“There is going to be some nervousness as we adjust to a more normal economic environment,” said Brad Sorensen, director of market and sector research at Charles Schwab. “Both the stock and bond markets are adjusting to a Federal Reserve that isn’t going to have the spigots wide open.”

The yield on the five-year Treasury note also rose sharply. It jumped to 1.23 percent from 1.06 percent late Tuesday. The 5-year yield also hit its lowest level of the year, 0.65 percent, on May 3.

Declines were led by high-dividend stocks like telecommunications and utilities, which are more sensitive to rising interest rates. Investors had bought these stocks for their dividend income when bond yields were at record low levels.

For weeks, investors have been trying to figure out when the central bank will start to ease back on its bond purchases. They overreacted Wednesday to the possibility of less stimulus, some analysts said. The economy will be strong enough for the Fed to start cutting back this year.

“I’m not really seeing a lot of reason for bonds to be selling off like they have or for the (stock) market to be down,” said Scott Wren, a senior equity strategist at Wells Fargo Advisors. “If the market sells off on this, you have to view it as an opportunity” to buy.

The Fed’s policy of low interest rates coupled with bond-buying has been a major factor driving stocks higher since the market bottomed out in March 2009. The S&P 500 has gained 14.2 percent this year and has advanced 141 percent since its recession low.

This article appeared in print on page 8 of the June 20th, 2013 edition of Hamodia.