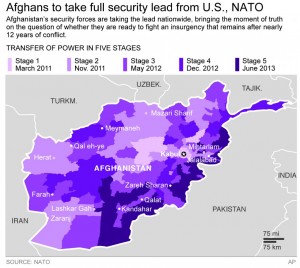 A large bomb targeting a minority lawmaker in western Kabul exploded Tuesday morning, an hour before NATO transferred formal responsibility for the nation’s security to Afghan forces, police said, killing three civilians and wounding more than a dozen others.

The assault in the western Pul-e Surkh area of western Kabul, near the headquarters of the Afghan Independent Human Rights Commission, was the fifth high-profile strike in six weeks on the heavily guarded capital. The Taliban said it would target foreign troops, U.N. officials and Afghans working with international forces at the start of its spring offensive, a time when warmer weather generally brings more intense fighting.

The transition is a major milestone in the 12-year-old war. In practice, however, some 100,000 international combat troops will continue to provide intelligence, training, air power and ground forces as needed for the foreseeable future.

Critics counter that the 350,000-strong Afghan National army suffers from inadequate training and morale and isn’t ready, but is nevertheless being pushed into a commanding role by NATO members keen to withdraw their combat troops by late 2014 and end the high costs and body count of a protracted conflict.

At least 2,100 members of the U.S. military have died in Afghanistan, including over 1,740 killed in conflict situations, since the U.S.-led invasion in late 2001, according to the Associated Press.

This article appeared in print on page 3 of the June 20th, 2013 edition of Hamodia.