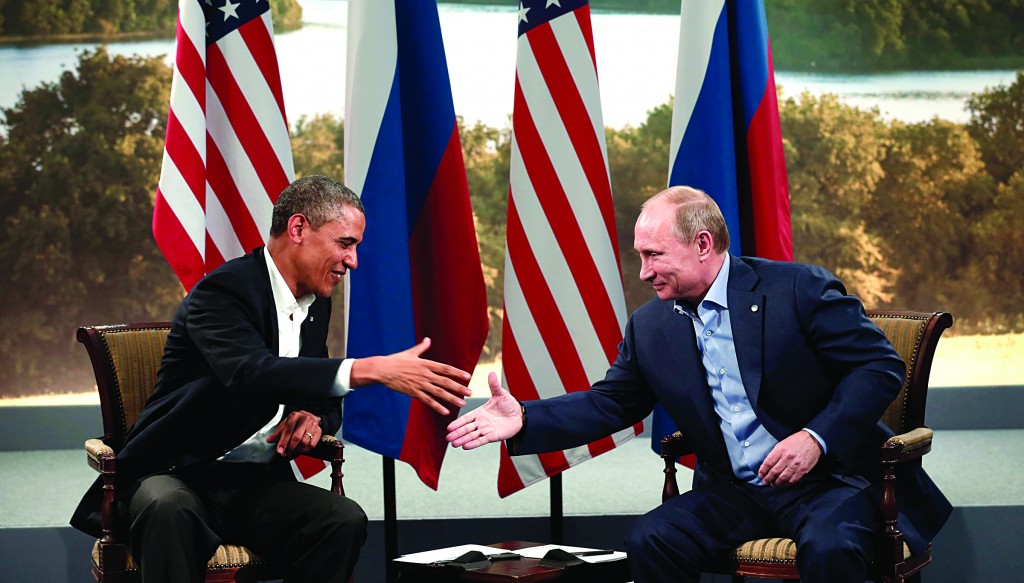 But there were also fissures among the three Western nations, despite their shared belief that Assad must leave power. Britain and France appear unwilling — at least for now — to join President Barack Obama in arming the Syrian rebels, a step the U.S. president reluctantly finalized last week.

The debate over the Syria conflict loomed large as the two-day summit of the Group of 8 industrial nations opened Monday at a lakeside resort in Northern Ireland. The lack of consensus even among allies underscored the vexing nature of the two-year conflict in Syria, where at least 93,000 people have been killed as rebels struggle to overtake Assad forces buttressed by support from Hizbullah, Iran and Russia.

Obama and Putin, who already have a frosty relationship, did little to hide their differing views on the matter while speaking to reporters following a one-on-one meeting on the sidelines of the summit Monday evening. The two-hour meeting marked the first time the leaders have met in-person since last year.

“We do have different perspectives on the problem,” Obama said plainly of their divergent views on Syria.

The Russian leader, speaking via a translator, agreed, saying, “our opinions do not coincide.”

But despite their seemingly intractable differences, Obama and Putin did express a shared desire to stop the violence in Syria and convene a political conference in Geneva, Switzerland, next month. But it’s unclear who would participate in such a meeting or whether the rebels, given their weakened position, would have any leverage if they did.

U.S. officials say Obama’s decision to send the rebels weapons and ammunition for the first time was an attempt to increase their military strength in order to bolster their political bargaining power. But the American inventory for the rebels is not yet expected to include the high-powered weaponry sought by the opposition, raising questions about whether deepening U.S. involvement will be able to change the situation on the ground.

The White House also announced Monday an additional $300 million in humanitarian aid for Syria and neighboring countries absorbing refugees escaping the violence. The new money brings the total U.S. humanitarian assistance to $800 million, according to the White House.

Obama’s decision to arm the rebels coincided with the White House’s announcement last week that it had definitive evidence of multiple instances of chemical weapons use by Assad’s regime against the opposition. Britain and France have also accused Assad of using the deadly agent sarin, while Russia has publicly questioned the credibility of chemical weapons evidence.

“It’s necessary to refrain from unproven claims by either party,” Putin adviser Alexei Kvasov told reporters at the summit Monday. “We have no evidence proving it.”

Moscow’s support for Assad is based in part on Russia’s deep economic and military ties with his regime. Last month, Russia acknowledged   it has agreed to sell Syria advanced S-300 air-defense missiles, viewed as the cutting edge in aircraft interception technology.

The Russian president’s divisions with Western leaders on Syria were also on display in his separate meetings with British Prime Minister David Cameron and French President Francois Hollande. Both European leaders have previously indicated a willingness to arm vetted Syrian rebels and successfully pushed for the European Union to allow an arms embargo preventing the flow of weapons to expire.

Still, neither country is yet to join Obama in arming the opposition. Following the U.S. decision, there has been growing public concern in both countries over the wisdom of delivering weapons to a country where groups affiliated with al-Qaida are supporting elements of the rebellion.

European nations are so far opposed to the idea of establishing a no-fly zone over Syria to stop Assad from using his air power to crush rebel forces or kill civilians. Obama is considering such an option, though his aides have questioned the feasibility, given Assad’s air defenses and the significant costs of such a program.