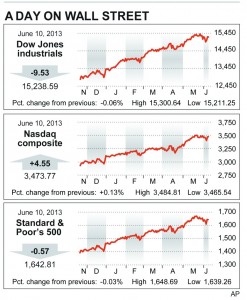 Stocks budged higher when trading opened, shortly after the S&P agency raised its outlook for the U.S. government’s debt rating and credited “the strengths of the economy.” But the gains proved both modest and fickle, and the market spent most of the day flitting between small gains and losses.

At day’s end, the Dow Jones industrial average and the S&P 500 were lower, but just barely. The Nasdaq composite was slightly higher. It was a marked change from Friday, when the Dow jumped 207 points after a jobs report that investors viewed as positive.

Trading volume was light, and there were no major economic reports or company announcements. The 10 industry sectors in the S&P were split down the middle, with half rising and half falling, but none moved dramatically. The best performer, telecommunications, was up 0.8 percent. The worst, consumer discretionary, was down 0.3 percent.

The reaction from investors from the S&P upgrade, was a far cry from two summers ago. Some doubted the S&P’s assessment that the economy is improving, and said the Fed is only artificially propping it up.

Ed Butowsky, managing partner of Chapwood Investments in Dallas, said that the unemployment rate is still too high, economic growth too weak and the government’s budget deficit too heavy for the economy to be considered healthy.

“It defies economic logic as to why the S&P did this,” Butowsky said. “…We continue to print money, we continue to spend money. What are they looking at?”

Outside the U.S., Japan’s Nikkei stock index soared 4.9 percent after a report that the world’s No. 3 economy is growing faster than expected. In the Netherlands, the central bank warned that the government needs to cut spending. Courts in Germany are poised to consider whether Germany is legally allowed to bail out struggling European countries, as it has been doing.

The yield on the 10-year Treasury note edged up to 2.21 percent from 2.18 percent late Friday, a sign that investors were more willing to put their money in the stock market. In commodities trading, the price of crude oil fell 26 cents to $95.77 per barrel, and gold edged up $3 to $1,386 an ounce.

—B&G Foods, whose brands include Cream of Wheat and Mrs. Dash, jumped after announcing it would buy Robert’s American Gourmet Food. B&G Foods rose $1.99, or 6.8 percent, to $31.17.

This article appeared in print on page 8 of the June 11th, 2013 edition of Hamodia.