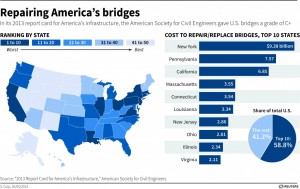 The collapse of an interstate highway bridge in northern Washington state should be a wake-up call that prompts an expansive safety review, according to National Transportation Safety Board officials.

Investigators are trying to determine why a bridge over Interstate 5 about 60 miles north of Seattle collapsed late Thursday after a truck clipped a steel truss, and what can be done to prevent similar accidents.

An investigation by The Associated Press suggests similar accidents could happen
elsewhere. Thousands of bridges around the U.S. are kept standing by engineering design rather than by sheer size or redundant protections. Such spans may be one freak accident or mistake away from collapse.

Bridge regulators call them “fracture-critical” bridges, because if a single vital component is compromised, they can crumple.

Hersman’s team will spend about a week inspecting the I-5 bridge, talking to the truck driver whose vehicle hit it and examining maintenance documents and accident reports.

Other large vehicles struck the Skagit River bridge before the collapse Thursday, she noted. Investigators are using a high-tech 3-D video camera to review the scene and attempt to pinpoint where the bridge failure began. Officials say they are working to find out whether the collapse was a fluke or a sign of bigger problems.

Washington state officials said Saturday that it will take time to find both short- and long-term fixes for the I-5 bridge.

While the NTSB finishes its inspection, state workers will begin cleaning up the river. Next, a temporary solution will be put in place to return traffic to Washington state’s most important north-south roadway.

Motorists should not expect to drive on I-5 between Mount Vernon and Burlington for many weeks and possibly months, said Washington Transportation Department spokesman Bart Treece.

About 71,000 vehicles use that stretch of highway every day.

Officials were looking for a temporary, prefabricated bridge to replace the 160-foot section that failed, Gov. Jay Inslee said Friday. That option could be in place in weeks. Otherwise, it could be months before a replacement can be built, the governor said.

Inslee said it will cost $15 million to repair the bridge.

Meanwhile, a  Missouri highway overpass that partially collapsed when rail cars smashed into one of its support pillars after a cargo train collision was about 15 years old and in good condition but just couldn’t withstand the impact, a sheriff said.

Seven people in two cars on the bridge overpass were injured, none seriously, when two 40-foot sections of the overpass crumpled before dawn Saturday.

This article appeared in print on page 1 of the May 27th, 2013 edition of Hamodia.