Sony Back in Black on Cheap Yen, Healthier Sales 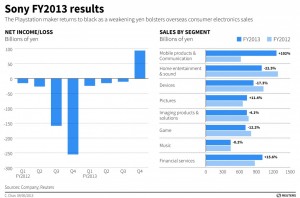 Sony Corp. is back in the black for its fiscal fourth quarter, recording a 93.9 billion yen ($948 million) profit, with big help from a weaker yen that boosts overseas earnings.

The Japanese electronics and entertainment company also dragged itself back to profitability for the fiscal year ended March 31, following four straight years of red ink.

On Thursday, it reported annual earnings of 43 billion yen ($434 million), a reversal from a loss of 457 billion yen ($5.7 billion) the previous year – the worst in the company’s nearly seven-decade history.

Tokyo-based Sony expects the recovery to continue, and projected a 50 billion yen ($505 million) profit for the fiscal year through March 2014, up 16 percent.

A weak yen helps Japanese exporters, and the dollar has gained 20 percent against the yen in recent months.

The favorable exchange rate is expected to continue in the coming months, because of the policies of Prime Minister Shinzo Abe, who took office last year.

Sony had sunk to a 255.2 billion yen loss for the January-March period in 2012, slammed by its money-losing TV business and competition from rivals Apple Inc. and Samsung Electronics Co.

Sony’s annual earnings were better than its own forecast of a 40 billion yen ($404 million) profit, and that of analysts surveyed by FactSet at about 33 billion yen ($333 million).

In an effort to achieve a turnaround, Sony has been shedding jobs and selling assets and parts of businesses in recent years.

The brand has lost much of its glamour as the maker of the Walkman portable music player, a pioneering product, as well as the PlayStation game console, once a must-have for holiday shopping.

Chief Financial Officer Masaru Kato said that despite the return to profitability, the company’s electronics sector, including camcorders and digital cameras, was struggling compared to its entertainment projects.

“We must answer to the challenge of making our electronics business profitable, no matter what,” he said.

The recent weaker yen, which will make Sony products cheaper abroad, was almost certain to work as a big plus, and Kato welcomed it.

Sony gained 182 billion yen ($1.8 billion) in its sales and operating revenue for the January-March quarter due to favorable exchange rates.

Sony is doing better in its mobile-phone business with its Xperia Z, which went on sale earlier this year. Sony had fallen far behind rivals like Samsung and Apple in smartphones.

Sony sold its U.S. headquarters building on New York’s Madison Avenue in January, as well as other buildings in Tokyo. It sold stocks in Japanese game maker DeNA.

It also ended its liquid-crystal display venture with rival Samsung, while inking a new capital alliance with Japanese electronics and camera maker Olympus Corp. to strengthen its medical equipment business.

Still, some analysts say catching up and selling assets isn’t enough, and Sony needs to come up with a more unique product.