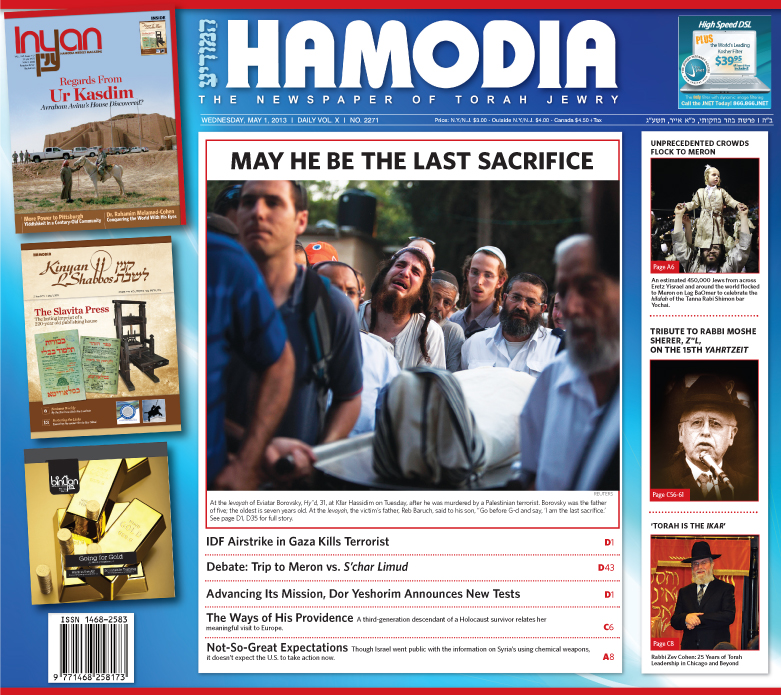 We would be ecstatic if we could report only glad tidings.

But as a newspaper, it is our duty to report current events, and unfortunately, our obligation to our readers includes informing them of some horrifying events, including  the terrorist attacks, armed conflict between and within nations and devastating natural disasters.

We place great emphasis on avoiding sensationalism. On a daily basis we protect our readers’ right not to know by excluding  inappropriate material, as well as graphic or gory details of reports we can’t omit.

At the same time however, we are cognizant that our obligation to our readers also includes our refusal to join those who seek to sweep everything painful and unpleasant under the carpet.

The Jewish nation, under the guidance of our great spiritual masters, never sought to deny reality or bury our heads in the sand. Throughout the generations, our mesorah has put great emphasis on being mishtateif b’tzaaron shel Yisrael.

At the age of 12, Moshe Rabbeinu was safely ensconced in the comfort of the royal palace of Pharaoh. Filled with concern about the fate of his brethren, he not only personally went to see how they were faring, but took the heavy burden that each of them was carrying, and placed it on his own shoulder, so he could be of help and physically relate to what they were going through.

Filled with enormous compassion, he began to weep:

“Woe to me! Who would give that I should die instead of you!”

Subsequently the Ribbono shel Olam said to Moshe. “You put aside your position [in the palace of Pharaoh] and went to witness the tzaar of [Bnei] Yisrael and exhibited to them brotherhood. I will put aside the upper and lower realms and speak with you!”

In contrast, in our generation there is a tendency to try to avoid distressful topics. Instead of focusing on what is occurring around us, and thus leading to cheshbon hanefesh and self-improvement, learning about the painful parts of our history and drawing the appropriate lessons, we stay in our comfort zone and concentrate on the shallow and the insignificant.

Some readers wonder why we chose to place the photo of the levayah of Eviatar Borovsky, Hy”d, instead of a picture of Lag BaOmer.

For one thing, we had already put Lag BaOmer on the cover of our Friday and Monday issues, and had extensive coverage of Lag BaOmer inside the weekly edition.

We also felt that it was important to send a message to ourselves and our children, that being a Torah Jew means thinking beyond our own comfort levels.

The average reader slept very well on Wednesday night even after viewing the front page photo. But the lives of Eviatar’s parents, his young almanah and five yesomim — the oldest is seven years old — have been changed forever.

Unlike the average reader, they can’t simply turn the page as they try to find consolation and to forge ahead with their lives.

The least we can do is try to be mishtateif in their pain.

Too Sad to Bear

When I first saw the cover picture of last week’s Hamodia, my initial reaction was that the photo that was chosen was heart-breaking, but appropriate. After all, the loss of a single life is comparable to an entire world.

But then, after hearing the reactions of some  other readers, I was forced to reconsider. Certainly, the tragic murder belonged on the front page, and we all should mourn this terrible loss, but was a photo of the levayah really necessary?

“The weekly Hamodia sits in my living room until Monday,” one reader told me. “This frightening picture was deeply distressing for children.”

The point is a valid one.

Although some may argue whether a photo of a body wrapped in a tallis should be used at all, I disagree. Putting this moving picture of the levayah on an inner news page would have been perfectly appropriate. Youngsters generally don’t read the inner pages of a publication the size of Hamodia, and if they do, they might not even notice it.

But a front page picture is unavoidable. It is large and striking and everyone in the room notices it every time they pass the table or couch it was left on.

It isn’t only because of the youthful readers of Hamodia that I feel that a picture of Lag BaOmer would have been a better choice.

We live an era when so many people are suffering from many different issues. So many Jewish hearts are broken and rivers of tears are being shed. People are desperate for something that will help them heal and lift their spirits and this picture, as moving and powerful as it was, just pushed them further into the pits of despair.

Harav Menachem Nachum, the Rebbe of Tolna, zy”a, explains this verse according to the teaching of the Rambam, that when one wishes to eradicate an improper trait one should first accustom oneself to the extreme opposite of this trait.

There are some individuals who are a bit too exuberant, and don’t take life seriously enough. They are required to go to a house of mourning, and take the lessons of mortality to heart.

All too often however, people are suffering from the opposite challenge — they are bogged down by tests of life and find themselves despondent and unhappy. Therefore they are told to go to a beis hamishteh — house of joy and feasting to raise their spirits.

Though neither of these extremes are recommended, Shlomo Hamelech teaches us that the former is still preferable: for someone to suffer from too much exuberance rather than too little happiness.

Hamodia clearly chose the literal understanding of this passuk. In retrospect, I would have preferred the homiletical approach.