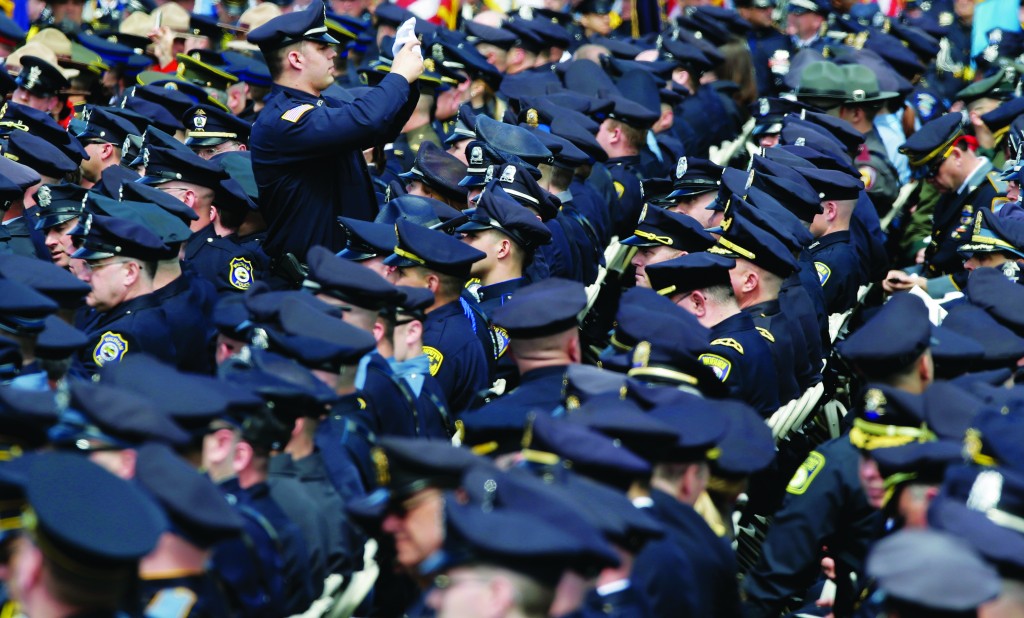 From Boston and Washington to Russia, investigators pressed for answers Wednesday about the Muslim radicalism believed behind the Boston Marathon bombing, while more than 4,000 mourners paid tribute to an MIT police officer who authorities say was gunned down by the bombers.

Among the speakers at the memorial service in Cambridge was Vice President Joe Biden, who condemned the bombing suspects as “two twisted, perverted, cowardly, knockoff jihadis.”

Dzhokhar Tsarnaev, 19, was listed in fair condition as he recovered from wounds suffered during a getaway attempt. He could get the death penalty if convicted of plotting with his older brother, now dead, to set off the pressure-cooker bombs that killed three people and wounded more than 260 on April 15. Tamerlan Tsarnaev, 26, died in a shootout with police.

The bombs were detonated by remote control, according to U.S. officials close to the investigation who spoke on condition of anonymity because they were not authorized to discuss it publicly. It was not clear what the detonation device was, but the charges against Dzhokhar say he was using a cellphone moments before the blasts.

U.S. officials also said Dzhokhar has told interrogators he and his brother were angry about the U.S. wars in Muslim Afghanistan and Iraq.

After closed-door briefings on Capitol Hill with the FBI and other law enforcement officials, lawmakers said earlier this week that it appeared so far that the brothers were radicalized via the Internet, not by direct contact with any terrorist groups, and that the older brother was the driving force in the bomb plot.

In Russia, U.S. investigators traveled to the predominantly Muslim province of Dagestan and were in contact with the brothers’ parents, hoping to gain more information.

The parents, Anzor Tsarnaev and Zubeidat Tsarnaeva, plan to fly to the U.S. on Thursday, the father was quoted as telling the Russian state news agency RIA Novosti. The family has said it wants to bring Tamerlan’s body back to Russia.

Investigators are looking into whether Tamerlan, who spent six months in Russia’s turbulent Caucasus region in 2012, was influenced by the religious extremists who have waged an insurgency against Russian forces in the area for years. The brothers have roots in Dagestan and neighboring Chechnya, but had lived in the U.S. for about a decade.

At the Massachusetts Institute of Technology, bagpipes wailed as students, faculty and staff members and throngs of law enforcement officials paid their respects to MIT police officer Sean Collier, who was ambushed in his cruiser three days after the bombing.

The line of mourners stretched for a half-mile. They had to make their way through tight security, including metal detectors and bomb-sniffing dogs.

Biden told the Collier family that no child should die before his or her parents, but that, in time, the grief will lose some of its sting.

“The moment will come when the memory of Sean is triggered and you know it’s going to be OK,” Biden said. “When the first instinct is to get a smile on your lips before a tear to your eye.”

“The purpose of terror is to instill fear,” he said. “You saw none of it here in Boston. Boston, you sent a powerful message to the world.”

In another milestone in Boston’s recovery, the area around the marathon finish line was reopened to the public, with fresh cement still drying on the repaired sidewalk. Delivery trucks made their way down Boylston Street under a heavy police presence, though some damaged stores were still closed.

“I don’t think there’s going to be a sense of normalcy for a while,” Tom Champoux, who works nearby, said as he pointed to the boarded-up windows. “There are scars here that will be with us for a long time.”