Microsoft’s Windows 8 software appears to be driving buyers away from PCs and toward smartphones and tablets, research firm IDC said Wednesday. That’s leading to the fastest drop in PC sales the firm has ever seen.

Global shipments of PCs fell 14 percent in the first three months this year, IDC said. That’s the sharpest plunge since the firm started tracking the industry in 1994.

The report comes after a year of bad news for the PC. Consumers, especially in wealthy countries like the U.S., are steering their dollars toward tablets and smartphones rather than upgrading their home PCs. It’s the biggest challenge to the personal computer since the IBM PC was released in 1981.

In an attempt to keep the PC relevant, Microsoft released a radical new version of Windows on Oct. 26. Windows 8 has a completely new look and forces users to learn new ways to control their machines.

“Unfortunately, it seems clear that the Windows 8 launch not only didn’t provide a positive boost to the PC market, but appears to have slowed the market,” IDC Vice President Bob O’Donnell said.

The newest version of Windows is designed to work well with touch-sensitive screens, but the displays add to the cost of a PC. Together, the changes and higher prices “have made PCs a less attractive alternative to dedicated tablets and other competitive devices,” O’Donnell said.

Representatives of Microsoft Corp. were not immediately available for comment. 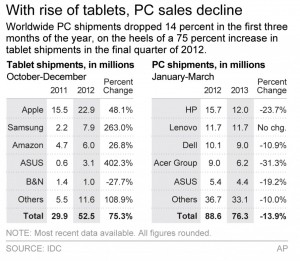 Another research firm, Gartner, Inc., reported an 11 percent decline in PC shipments in the quarter. That, too, is the sharpest decline it’s seen since it started tracking the market in 2001.

Microsoft shares fell 28 cents, or 0.9 percent, to $30 in extended trading, after the release of the report. They had gained 67 cents in regular trading.

Hewlett-Packard Co., the world’s largest maker of PCs, saw a 24 percent drop in shipments in the first quarter, compared with the same period a year ago. The industry’s No. 2, China’s Lenovo Group, is benefitting from sales to first-time buyers in China and other developing countries. As a result, it held sales steady, alone among the world’s top five PC makers, according to IDC’s figures.

Gartner noted one bright spot: Businesses are buying more PCs, and account for about half of the market.

Both firms track shipments of PCs from the manufacturer, rather than retail sales. Shipments correlate closely with sales. The figures include shipments of Apple’s Macs, which account for about five percent of the worldwide market.