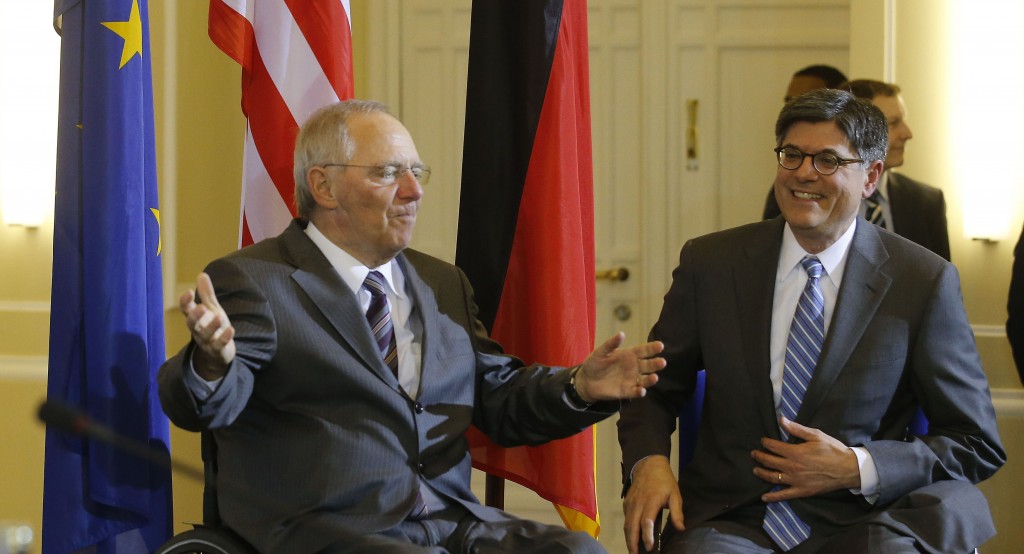 Treasury Secretary Jacob Lew and German Finance Minister Wolfgang Schauble on Tuesday downplayed differences in their views on the importance of growth and austerity in lifting Europe’s economy, but deep divides between the two remained.

On the second day of his trip to Europe, Lew met with Schauble, the architect of Germany’s response to the financial crisis buffeting the continent, and argued that more must be done to support economic growth. Germany has acknowledged the need to do more, but has resisted taking the sort of swift and flexible action that Americans favor.

“Global demand needs to grow, and policies within a country to grow demand are good domestically and good for the world economy,” Lew said in a joint appearance with Schauble at the German Finance Ministry here. “The driver for economic growth is consumer demand, and policies that would help to encourage consumer demand in countries that would have the capacity would be helpful.”

Lew suggested that measures taken by the United States were instructive, as policymakers have sought to keep the economy growing in the short term while doing more to rein in government deficits in the medium term.

“We, in the context of the U.S. economy, have seen the need to balance growth and fiscal discipline in a way that keeps our economy strong,” he said. “That’s meant some midcourse correction.”

Schauble said there has been a “misconception” about Germany’s policy, saying that it is important to maintain a disciplined plan to rein in budget deficits even while taking new steps to generate economic activity.

“Nobody in Europe sees this contradiction between fiscal policy consolidation and growth,” he said. “We have a growth-friendly process of consolidation and we have sustainable growth however you want to word it.”

Lew was in Germany for his first official trip to Europe since becoming Treasury secretary, meeting with eight senior economic leaders. He spent Monday in Brussels and Frankfurt meeting with top officials including European Central Bank president Mario Draghi.

Europe’s troubles have been on display with the near-collapse of Cyprus’s banking system and the struggle of European leaders to arrest the financial crisis that has pushed numerous euro-zone economies into recession.

Italy, Spain and other countries in southern Europe are in recession and struggling to find ways to grow. Northern European countries, namely Germany, have considerable room to spur growth through more flexible budget targets, government-financed stimulus and efforts to lift wages, analysts say.

“The approach that the Europeans have developed to tackle the crisis is essentially one that skews all the possible burden to the country under stress. That optimizes moral hazard considerations but escalates contagion,” Domenico Lombardi, senior fellow at Brookings, said in an email. “To the extent that the latter is transmitted to other vulnerable economies . . . any escalation of the crisis could easily reverberate beyond the [euro zone] boundaries. And this is what the [United States] is most afraid of.”

While he was restrained in his comments Tuesday — with Lew by his side — Schauble has been defending austerity in other comments.

“I don’t think that any austerity programs, whether in Greece, in Portugal or in Germany, are the reason for the problems we have,” Schauble said Monday, according to Bloomberg. “We have to keep going forward on this path.”

A senior Treasury official said that in Lew and Schauble’s private meeting, the Treasury Secretary made clear that it is important to spur growth, and highlighted the U.S. experience. But the official added that Lew did not issue specific prescriptions for the German economy, speaking only broadly of the need to balance steps to rein in deficits with the need to drive growth and lower unemployment.

Jacob Kierkegaard, senior fellow at the Petersen Institute for International Economics, said Lew is likely to be seen as a persuasive counterpart by the Europeans, given his role in successful budget pacts in the United States. But he cautioned that expectations should not be too high.

Kirkegaard wrote in an email that no “Treasury secretary however articulate and well known would be able to get the Europeans — Germans — to change their . . . response policies much.” He added, “It is simply regarded as domestic politics in Europe, which the US should not bilaterally interfere in.”

Lew also met Tuesday with French Finance Minister Pierre Moscovici in Paris. The meeting was temporarily canceled due to an unfolding scandal in France related to a former budget official who lied about secret accounts.

Lew’s meetings with his European counterparts come ahead of an April 19 gathering of global finance ministers in Washington, hosted by the International Monetary Fund and World Bank.

Back in the United States this week, Lew is set to testify in Congress on President Barack Obama’s budget, due to be released Wednesday.