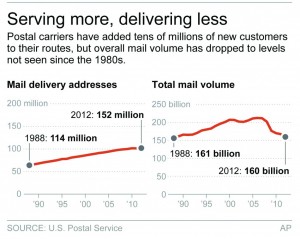 What business gets more customers every year, yet keeps losing money?

The U.S. Postal Service delivers mail to 11 million more homes, offices and other addresses than it did a decade ago, even as the amount of mail that people in the United States receive has dropped sharply.

That combination may be financially dicey, some analysts say.

“The more delivery points they have to service, the higher their costs” in fuel, time spent, etc., says Rick Geddes, associate professor in Cornell University’s department of policy analysis and management.

“But it doesn’t mean their revenue goes up — it doesn’t necessarily mean people are mailing more stuff,” he says.

Indeed, the volume of mail has decreased steadily as people stay in touch with email and other electronic services more. Total mail volume handled by the financially shaky postal agency dropped to 160 billion pieces last year from its all-time high, 213.1 billion in 2006. Revenue fell to $65.2 billion last budget year from a high of $74.9 billion in 2008.

The cost of delivery is the agency’s largest fixed expense. It takes tens of billions of dollars a year and 300,000 people, or 60 percent of the agency’s workforce, to handle deliveries, says Postal Service spokeswoman Sue Brennan.

This article appeared in print on page 3 of the April 9th, 2013 edition of Hamodia.

Hawaii Volcano Eruption Has Some on Alert, Draws Onlookers