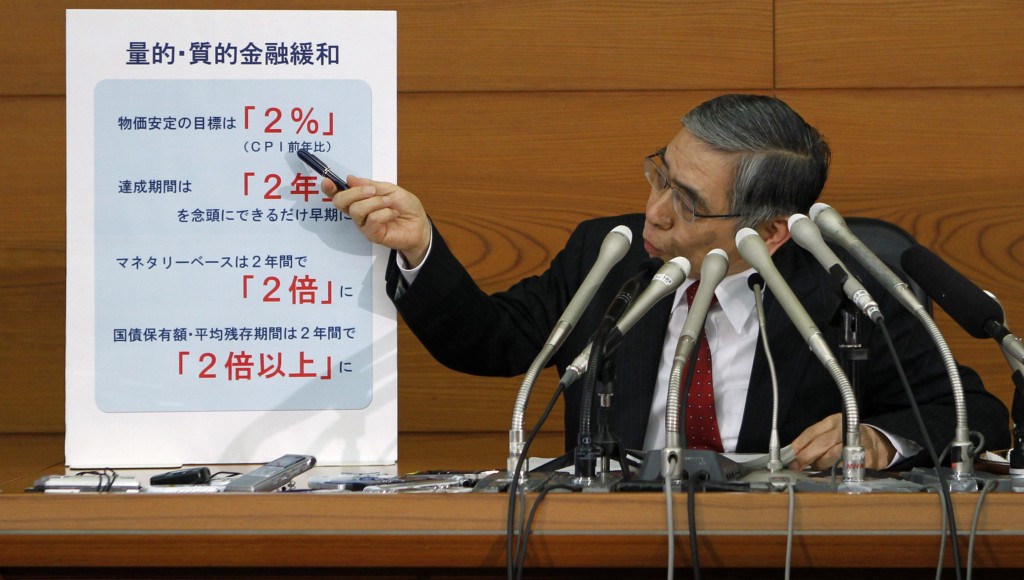 Japan is taking aggressive action to lift consumer prices, encourage borrowing and help pull the world’s third-largest economy out of a long slump.

Like the U.S. Federal Reserve, Japan’s central bank plans to flood its financial system with more money – its most far-reaching step to date to get consumers and companies to borrow and spend.

The Bank of Japan’s action will also drive down the value of the yen. A cheaper currency will make Japanese goods – from Toyota cars to Sony products – less costly for Americans and other foreigners. And it will make U.S. and other exports more expensive in Japan.

The move comes as major central banks around the world are acting to stimulate their economies. On Thursday, European Central Bank President Mario Draghi said the ECB is considering doing more to shore up the ailing economy of the euro alliance. The ECB left its benchmark interest rate unchanged at 0.75 percent, but Draghi said an interest-rate cut was discussed Thursday.

And the U.S. Fed has said it expects to keep short-term rates at record lows at least until unemployment falls to 6.5 percent from the current 7.7 percent. The Fed also plans to continue buying $85 billion a month in bonds indefinitely to keep long-term borrowing costs down.

“The central banks are being more activist than we’ve seen in decades,” said Timothy Duy, an economist at the University of Oregon. “One central bank after another has to do more because economies aren’t improving as fast as would have been expected.”

Dan Akerson, CEO of General Motors Co., told CNBC that he feared the Bank of Japan’s policies would give Japanese automakers a price advantage over GM in the United States.

“They’re an export economy,” Akerson said. “You have to be suspicious of what they’re doing and why.”

But many economists say the rest of the world would benefit, too, because a faster-growing Japan would buy more products and services from the United States, China and Europe, helping boost their economies.

“We could see some faster and sustainable growth now in Japan,” said Bernard Baumohl, chief global economist at the Economic Outlook Group. “That will obviously help the global economy.”

Japan’s economy has been sputtering for two decades. Last year, weak consumer spending kept prices flat. The Bank of Japan hopes to increase inflation to two percent within about two years. Economists say Japanese consumers will start spending if they know prices are going to rise.

Eswar Prasad, an economist at Cornell University, cautioned that Japan needs more than easy-money policies to repair its economy. It needs to reduce its debts and reform policies that protect weak firms from competition and undercut the country’s productivity.

“Japan would no longer be a drag on the global economic recovery if it had stronger domestic demand and positive inflation,” Prasad said. “However, it is far from clear that the Bank of Japan’s actions will be able to deliver these positive outcomes in the absence of broader structural reforms that are essential to revive Japan’s productivity and competitiveness. ”

Critics also say that without wage increases to match the price hikes, many consumers may be even less willing to spend.

“The new BOJ’s willingness to experiment should be welcomed,” said Uri Dadush, director of the economics program at the Carnegie Endowment for International Peace. “But they are also inevitably wading into unknown waters. There is no certainty that the new approach will work.”

Baumohl added that BOJ’s move could backfire if other countries deliberately push down the value of their currencies to regain a price edge for their exports.

“It does increase the risk of other countries taking similar moves in what they perceive as a currency war,” he said.

In its announcement, the Bank of Japan said it plans to buy more than $530 billion a year in government bonds. BOJ governor Haruhiko Kuroda described the scale of monetary stimulus as “large beyond reason,” but said the inflation target would remain out of reach if the central bank stuck to incremental steps.

“We’ll adjust without hesitation if need be, while monitoring economic and price conditions,” he said.

The Bank of Japan said it intends to “drastically change the expectations of markets and economic entities.”

On Thursday, Japanese stocks jumped and the yen sank after the central bank’s announcement. The yen weakened three percent against the dollar, to 95.94 yen, while Tokyo’s Nikkei stock index rose 2.2 percent to 12,634.54.

“By committing today to meet a two percent inflation target in two years, Gov. Kuroda can justifiably claim to have set the Bank of Japan on a new path,” said Mark Williams of Capital Economics.

Kuroda has vowed to do what he must to meet the inflation target within two years. Thursday’s decision after a two-day policy meeting makes that central bank policy.

Politically, the policy shift is a coup for Abe, whose Liberal Democratic Party needs to make headway in reviving the economy before an upper house parliamentary election in July. The LDP is hoping for a strong-enough mandate to push ahead with other items on their wish list, such as politically-difficult economic and educational reforms, and changes to the constitution to give Japan’s military a higher profile.

More aggressive monetary easing is a top priority, along with increased public spending to help perk up demand and reforms to make the economy more competitive in the long run.

Abe had accused Kuroda’s predecessor Masaaki Shirakawa, who stepped down on March 19, of balking at undertaking bold-enough monetary easing to get the economy back on track. The steps announced Thursday under the first policy meeting chaired by Kuroda exceeded expectations in that regard.

“The first step is to get out of deflation and get a much higher nominal growth rate,” Kozo Yamamoto, a senior lawmaker in Abe’s Liberal Democratic Party, said Wednesday. A doubling of the money supply was needed to achieve that aim, he said.

The BOJ’s policy reforms appear to be a major concession to government demands, despite the bank’s ostensible autonomy.

The bank kept the benchmark rate at 0.1 percent. But instead of carrying out money market operations to meet interest rate targets that have long remained near zero, the central bank will focus on the monetary base, or total amount of cash in circulation and bank reserves, raising it by 60 trillion yen to 70 trillion yen ($637 billion to $744 billion) a year. The monetary base stood at 138 trillion yen ($1.45 trillion) at the end of 2012.

The idea is that increasing the amount of cash in circulation will inflate prices, including for assets, encouraging more spending by those who own shares and property.

“If prices don’t go up, wages don’t go up. If people believe prices will be higher six months from now, then they will believe it’s best to buy now rather than later,” Abe said in a parliamentary debate Tuesday.