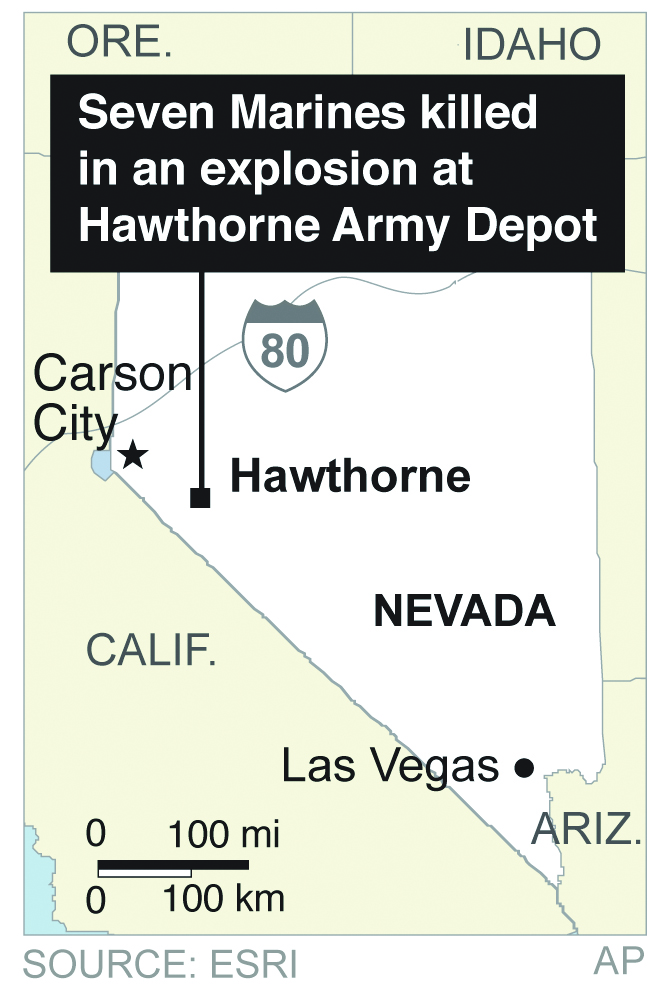 A mortar shell explosion killed seven Marines and injured a half-dozen more during a training exercise in Nevada’s high desert, prompting the Pentagon to immediately halt the use of the weapon worldwide until an investigation can determine its safety, a military official said Tuesday.

The explosion occurred Monday night at the Hawthorne Army Depot, a facility used by troops heading overseas, during an exercise involving the 2nd Marine Expeditionary Force at Camp Lejeune, N.C. Several Marines from the unit were injured in the blast, authorities said.

The official said it was not immediately clear whether the 60mm mortar shell exploded prematurely inside its firing tube or whether more than a single round exploded. The official spoke on condition of anonymity because the official wasn’t authorized to speak about an ongoing investigation.

Renown Regional Medical Center in Reno, the area’s major trauma hospital, took eight patients, including one who died, five who are in serious condition, one in fair condition, and one who has been discharged, according to spokesman Mark Earnest.

All the patients are men under the age of 30, he said. Hospital officials described their injuries as penetrating trauma, fractures and vascular injuries.

The rescue was complicated by the remoteness of the site, which is favored because the harsh geography simulates conditions in Afghanistan. A helicopter ride to Reno is 41 minutes long, according to Care Flight spokesman Kurt Althof, and the distance is 2 1/2 hours by car. He said Hawthorne and other rural communities rely on helicopters for much of their emergency response.

“The hospitals aren’t equipped to handle anything even remotely close to this event,” Althof said.

The identities of those killed won’t be released until 24 hours after their families are notified.

“We send our prayers and condolences to the families of Marines involved in this tragic incident,” said the force’s commander, Maj. Gen. Raymond C. Fox. “We mourn their loss, and it is with heavy hearts we remember their courage and sacrifice.”

The 60mm mortar is a weapon that traditionally requires three to four Marines to operate, but it’s common during training for others to observe nearby. The firing tube is supported in a tripod-like design and fires roughly a 3-pound shell, some 14 inches in length and a bit larger than 2 inches in diameter.

The Marine Corps official said an explosion at the point of firing in a training exercise could kill or maim anyone inside or nearby the protective mortar pit and could concussively detonate any mortars stored nearby in a phenomenon known as “sympathetic detonation.”

The Hawthorne Army Depot stores and disposes of ammunition. The facility is made up of hundreds of buildings spread over more than 230 square miles, and bunkers dot the sagebrush-covered hills visible from the highway. Snow-capped mountains jut up in the east.

Hawthorne has held an important place in American military history since World War II when it became the staging area for ammunition, bombs and rockets for the war. The Nevada Division of Environmental Protection says that the depot employed more than 5,500 people at its peak. Nevada was chosen for the location because of its remoteness in the wake of a devastating explosion at the government’s main depot in New Jersey in the 1920s.

It opened in September 1930 as the Naval Ammunition Depot Hawthorne and was redesignated Hawthorne Army Ammunition Plant in 1977 when it moved under the control of the Army, according to its website. In 1994, the site ended its production mission and became Hawthorne Army Depot. The site currently serves several purposes for the military, including storing ammunition and explosives and providing what the military calls an ideal training facility for special forces preparing for deployments to similar desert terrain.