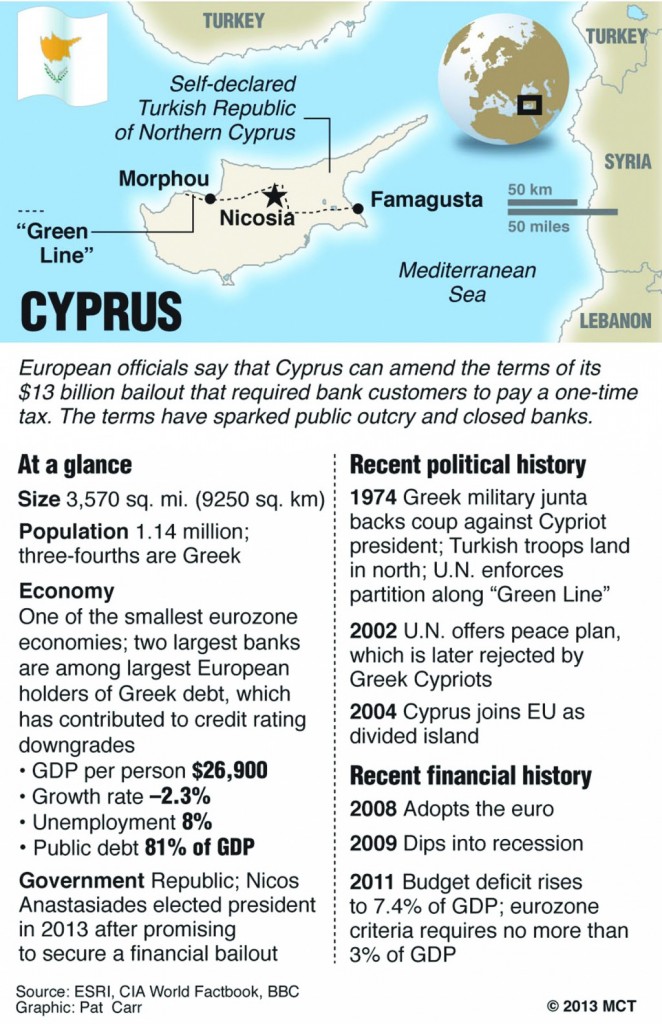 A plan to seize up to 10 percent of people’s savings in the small Mediterranean island nation of Cyprus sent shockwaves across Europe on Monday as households realized the money they have in the bank may not be safe.

A weekend agreement between Cyprus and its European partners called for the government to raid bank accounts as part of a (EURO)15.8 billion ($20.4 billion) financial bailout, the first time in the eurozone’s crisis that the prospect of seizing individuals’ savings has been raised.

Facing outrage, Cypriot authorities delayed a parliamentary vote on the seizure and ordered banks to remain shut until Thursday while it tries to modify the deal to reduce the hit on people with small deposits.

Several hundred protesters gathered outside the parliament building, with some chanting “thieves, thieves” and “people wake up, they’re drinking your blood.” One demonstrator dumped sheep wool and animal feces in front of a line of police officers guarding the entrance. Protesters later marched onto the presidential palace.

“It’s a precedent for all European countries. Their money in every bank is not safe,” said lawyer Simos Angelides.

In order to get (EURO)10 billion ($13 billion) in bailout loans from international creditors, Cyprus agreed to take a percentage of all deposits — including ordinary citizens’ savings.

Financial stocks fell sharply across Europe, as did the euro, even though the Cypriot economy accounts for only 0.2 percent of the combined output of the 17 European Union countries that use the currency.

“The damage is done,” said Louise Cooper, who heads financial research firm CooperCity. “Europeans now know that their savings could be used to bail out banks.”

The Cypriot government is now trying to modify the terms of the original plan and in particular to get a better deal for small savers with less than (EURO)100,000. The weekend deal foresaw a one-off charge of 6.75 percent on those savings, rising to 9.9 percent for those above the (EURO)100,000 mark.

While trying to make the package more appetizing for those with low savings, the government has to make sure that the total raised remains the same at (EURO)5.8 billion.

One alternative pitched by European Parliament President Martin Schulz is exempting savings up to (EURO)25,000 from the tax. Schulz is also a member of Germany’s opposition Social Democrats.

Still, the government has a battle to get a majority in the 56-member Parliament after some 25 lawmakers from communist AKEL, socialist EDEK and the Green party said they would vote down the levy that they have criticized as disastrous. Even center right party DIKO, a government ally that holds eight seats, is wavering over its support.

Any modification to the deposit seizure must be approved by the other finance ministers in the euro zone — who will hold a phone conference later Monday — before the Cypriot parliament can vote on it.

The stakes are high for the country of a million people, because a rejection of the package could see the country go bankrupt and possibly out of the common euro currency. Officials also fear a run on Cypriot banks no matter which way the voting goes, though immediate consequences for other eurozone countries are limited.

The decision by Cyprus’s 16 partners in the eurozone and the International Monetary Fund marks the first time that savings have been touched in a financial bailout. While it is not expected to cause a run on banks in Italy or Spain, it may make savers more likely to withdraw their funds.

Cypriot authorities said they had no choice in the matter.