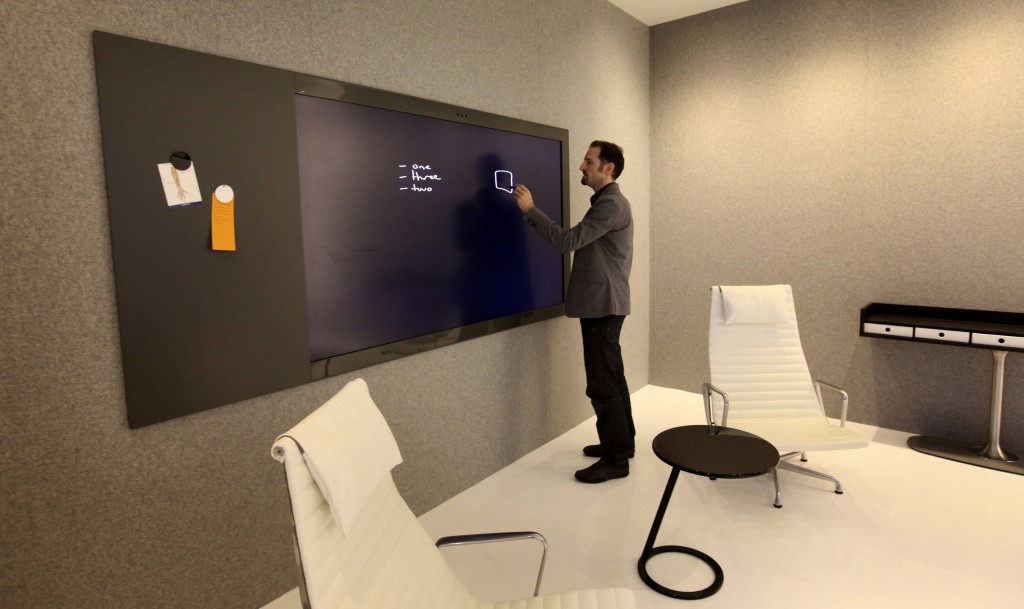 Put a skillet on your stove as you prepare to make a stir-fry, and an interactive chef on the big screen in your kitchen tells you a wok would probably work better.

Take a sketch of something you’ve been drawing on your tablet, and swipe it over to a large digital screen that doubles as your work surface. Then get that sketch to appear on a huge wall screen so that you and a co-worker halfway around the world can work on the sketch simultaneously.

Those are some of the scenarios Microsoft says could happen in the next five to ten years – and has brought to life now in its new Envisioning Center, which opened this month.

For nearly 20 years, Microsoft has housed the Microsoft Home (also referred to as “Home of the Future”) in a building on its Redmond, Wash., campus. In that facility, Microsoft replicates a home outfitted with technologies that it thinks will be in use in five to ten years. Since 2002, Microsoft’s Office division has had a similar futuristic workplace that includes productivity technologies. Now Microsoft has combined the two to form the Envisioning Center, a completely revamped home and office of the future, complete with a “third place” area meant to represent spaces such as retail stores and restaurants.

“It’s like a concept car,” explained Jonathan Cluts, Microsoft’s director of strategic prototyping. Not every single thing will come to be in five or ten years, but “we’re going to show you a future that we believe in, that we are investing in.”

Microsoft won’t disclose the square footage of the Envisioning Center, but it sits in the space formerly occupied by the old home and office, located on the second floor of the company’s Executive Briefing Center. Like its predecessors, it is not open to the public.

Rather, it’s designed to give visiting customers and dignitaries a sense of where the company is headed, and to help some Microsoft employees think through products and services they’re developing.

On a recent tour, Cluts and Anton Andrews, Microsoft’s director of Office envisioning, showed off the new digs, which were created with Olson Kundig Architects and design firm NBBJ.

The new center features more open, flexible spaces than the former “home” and centers on the themes of bringing people together, making people smarter, and using natural gestures, speech and touch to do things.

The new center also offers a clearer, more focused picture of how Microsoft is integrating the work of its various divisions, and how that integration can play out as the company evolves from providing strictly software to providing devices and services.

Technologies from Microsoft’s Online division and Server and Tools business are evident in everything from search results to relevant information that pop up in various contexts.

Open the door to the facility and you’ll enter an open office space in which there are stations for individual work, brainstorming sessions and team collaboration.

Content on the “team action wall” can change instantly, depending on the team or on the person who’s walking by the wall. A marketing person, for instance, would see a timeline of marketing decisions to be made, along with tools to help them make the decisions.

The “third place” area includes a pop-up retail space in which a user can place a toy car on a screen to find out more about the toy by touching various areas of the car. The setup then allows the toy to be sent as a gift, using the information already on your smartphone.

In the home area, there’s a big window that can become a giant display screen; a kitchen with a digital whiteboard that can, for instance, display each family member’s calendar or an interactive chef that can be called up to guide you through making dinner.

In the living room, more screens demonstrate how a grandmother in another state can read an interactive story with a grandchild. The grandmother is on one screen, and scenes from the story – which can change, depending on what actions the child takes – appear on the other.

According to Craig Mundie, senior advisor to Microsoft CEO Steve Ballmer and a former chief research and strategy officer at the company, the new center is built around Microsoft’s investments in three main technological areas:

“We never guess completely right. But we were probably closer to right than wrong in each succeeding generation” of the Microsoft Home, said Mundie, adding that some of the technologies displayed in earlier homes – such as digital picture frames – have come into widespread use.