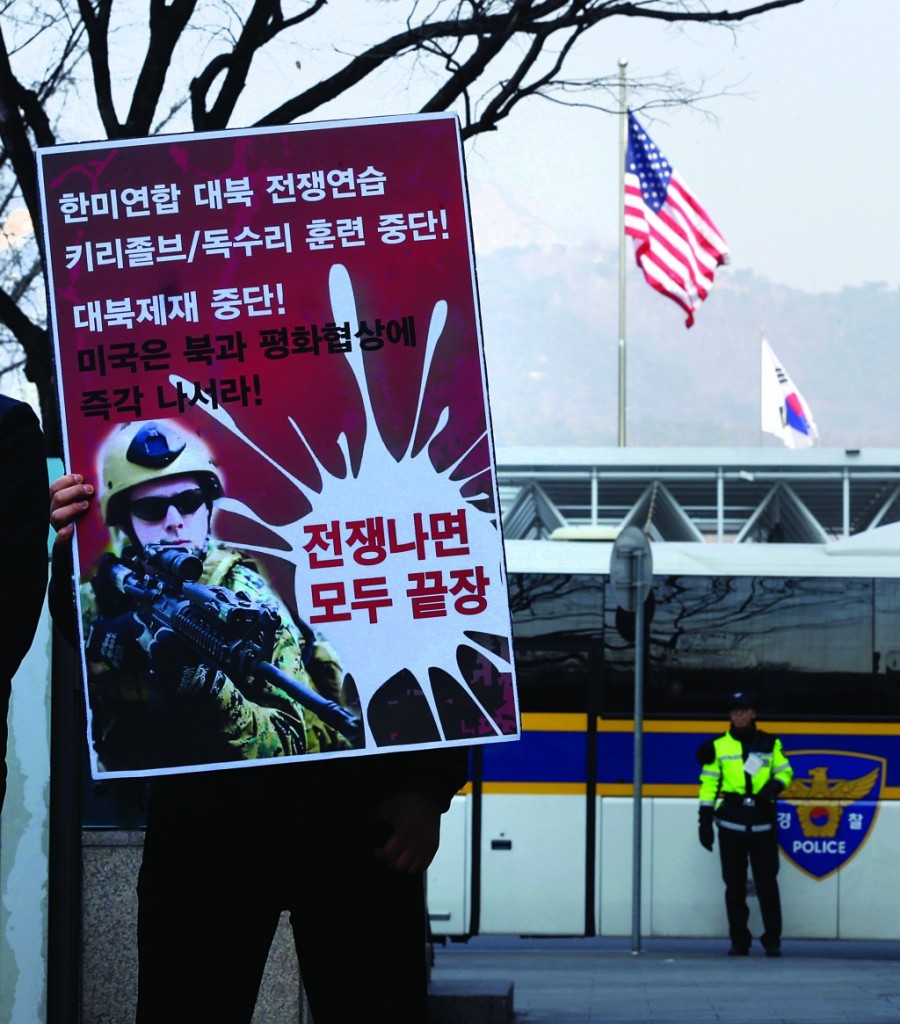 The United States and China reached a deal that “significantly expands” U.N. sanctions on North Korea for its third nuclear test, eliciting a renewed threat by Pyongyang on Tuesday to scrap an armistice that ended the 1950-53 Korean War.

North Korea also said it would sever a military “hotline” with the United States if South Korea and Washington pressed on with two-month-long war games.

China’s U.N. ambassador, Li Baodong, told Reuters the 15-nation Security Council was aiming for a Thursday vote on a draft sanctions resolution, which was agreed to by Washington and Beijing after three weeks of negotiations.

China is North Korea’s closest ally and has a history of resisting tough sanctions on its neighbor. The Chinese envoy made clear that Beijing was displeased by North Korea’s February 12 nuclear test — its third since 2006 — though he cautioned against responding too harshly.

“We support action taken by the council, but we think that action should be proportionate, should be balanced and focused on bringing down the tension and focusing on the diplomatic track,” Li said.

“A strong signal must be sent out that a nuclear test is against the will of the international community,” he added.

U.S. Ambassador to the United Nations Susan Rice said after a closed-door meeting of the Security Council that the new draft resolution “builds up, strengthens and significantly expands the scope of the strong U.N. sanctions already in place.”

“The sanctions contained in this resolution will significantly impede the ability of North Korea to develop further its illicit nuclear and ballistic missile programs,” she said.

“North Korea will be subject to some of the toughest sanctions imposed by the United Nations,” she told reporters.

Russian Ambassador Vitaly Churkin was quoted by Russian media as saying Moscow welcomed that the draft resolution leaves the door open to a renewal of the stalled six-party aid-for-disarmament talks between the two Koreas, the United States, China, Russia and Japan.

Developments in New York led to a volley of bellicose rhetoric from Pyongyang.

The spokesman called the U.S.-South Korean military exercise “a systematic act of destruction aimed at the Korean armistice.” The two Koreas remain technically at war since the 1950-53 conflict ended in a truce rather than a peace treaty.

About 200,000 Korean troops and 10,000 U.S. forces are expected to be mobilized for their defensive “Foal Eagle” exercise, under the Combined Forces Command, which began on March 1 and goes until the end of April. Separate computer-simulated drills called “Key Resolve” start on March 11.

North Korea, officially called the Democratic People’s Republic of Korea (DPRK), has made much of hotlines with the South and the United States over the years, but has not been known ever to have used them in times of increased tension.

The latest threats were reminiscent of previous periods of high tension on the Korean peninsula.

In 1996, under pressure from severe famine after floods and in the midst of maneuvering with the United States over its nuclear program, Pyongyang announced it would no longer abide by the armistice and sent troops into the demilitarized zone between the North and the South.

In 2009, after carrying out an underground nuclear test, Pyongyang announced again that it no longer considered itself bound by the terms of the armistice.

North Korea’s previous nuclear tests, in 2006 and 2009, prompted the Security Council to impose sanctions that included a ban on the import of nuclear and missile technology, an arms embargo and a ban on luxury goods imports.

The U.S. ambassador gave some of the specifics of the new draft resolution after Tuesday’s meeting including measures aimed at North Korea’s banking relationships and cash transfers.

“The breadth and scope of these sanctions is exceptional and demonstrates the strength of the international community’s commitment to denuclearization” of the Korean peninsula, she said.

Pyongyang said at the time that the test was an act of self-defense against “U.S. hostility” and threatened stronger steps if necessary.

In January, the Security Council passed a resolution expanding U.N. sanctions against North Korea due to its December rocket launch and warned Pyongyang against further launches or nuclear tests. North Korea responded by threatening a new atomic detonation, which it then carried out the following month.

“Rather than threaten to abrogate, the world would be better served if they (North Korea) would engage in legitimate dialogue,” Sec. of State John Kerry said during a visit to Qatar.

“Our preference is not to brandish threats, but for peaceful negotiations,” he added.